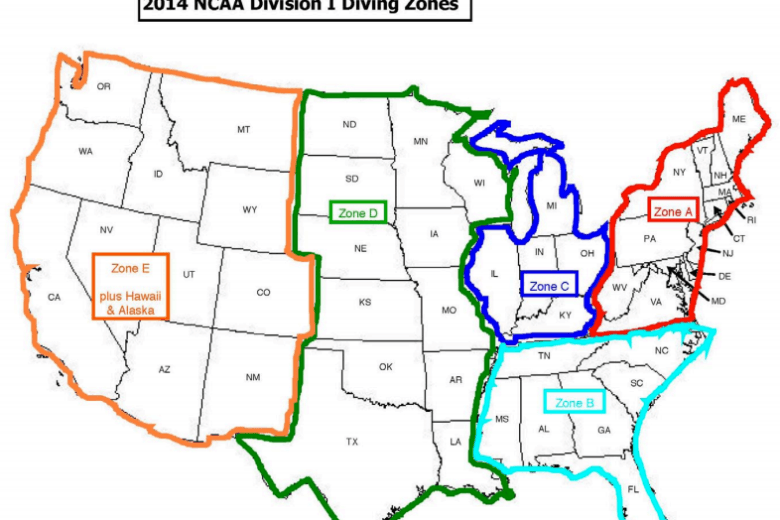 See how different teams' NCAA hopes could be affected by the zone diving distributions. Current photo via NCAA

Riley Boulden, who has spent the last 3 seasons as sprint coach and recruiting coordinator at FAU, has joined the NC State coaching staff as a volunteer assistant.

The NCAA has announced their allocations of Zone diving spots for the 2014 Division I Championship.

These allocations are based on the previous year’s NCAA Championship diving results, and in some very competitive diving conferences, can have an impact ultimately on NCAA scoring.

Below, we’ve laid out the zone allocations, along with a list of which schools in our top 25 mid-season rankings will be in which zone. Above is a map laying out which states are assigned to which zones.

The biggest winners this year were the Zone D women, who got two more qualifiers. That could be big for programs like Texas, Texas A&M, and Minnesota, who will be counting on diving points to as part of top 10 efforts at NCAA’s.

Zone B’s men also got another qualifier this year, recognizing the rise of diving in the ACC (Virginia, Virginia Tech, Duke). Zone B male divers will have big opportunities.

The Texas men’s title hopes, though by no means a crippling-blow, got bad news in that there zone will only get 7 qualifiers this year, as compared to 8 last year. The Longhorns’ single biggest advantage on the other contending teams (Cal, Florida, Michigan) is their divers. Texas this year has, as scary as it sounds, as many as 7 male divers capable of scoring points at the NCAA Championships, but it’s going to be tough for them to get that many out of the zone diving.

The Longhorns only qualified two divers last year, but getting four scorers this year would be a huge bump. Of course, for those watching the roster limit, each diver counts as 1/2 of a roster spot toward the squad size limit of 18.

this could cost texas up to 20 points