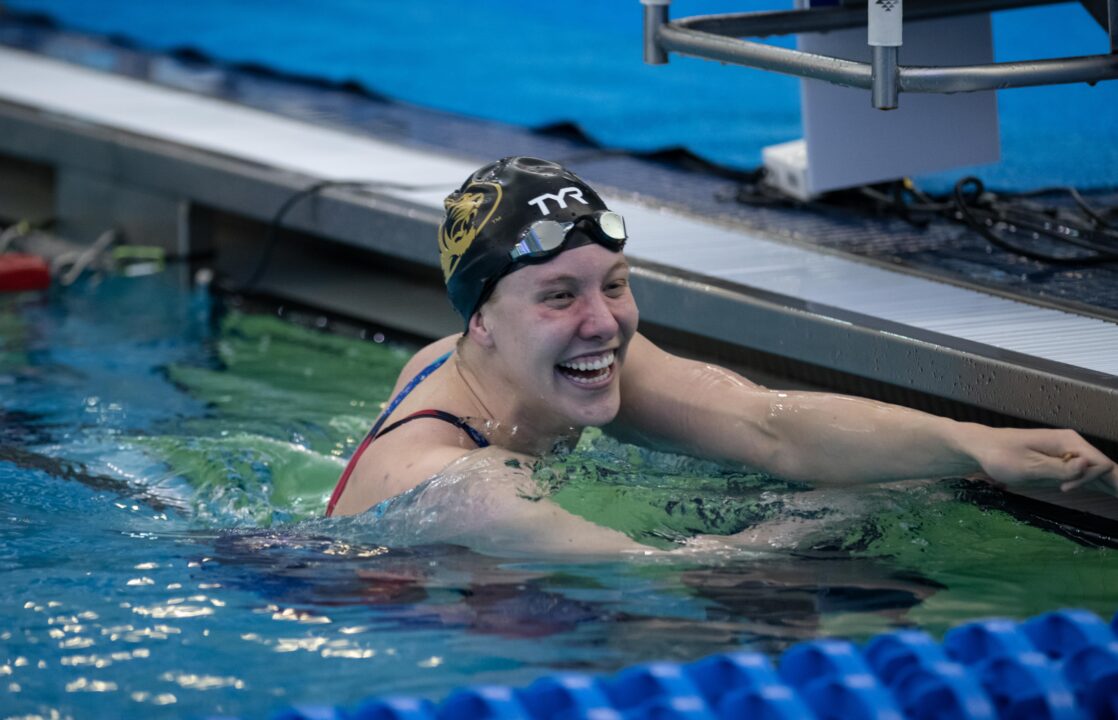 With Thompson's return, all of Mizzou's 2021 NCAA scorers and sprint relay legs will be back next season. Current photo via Courtesy of the NCAA

All-American Sarah Thompson is returning for a fifth year with the Missouri Tigers next season, per a release from the school.

Thompson is one of several swimmers taking up the NCAA’s waiver that granted all winter sports athletes an additional year of eligibility due to the COVID-19 pandemic. Scholarships for athletes competing in their extra year of eligibility do not count toward a team’s cap meaning that, if Mizzou allows it, Thompson can maintain her financial aid without taking away from other members of the team.

“I am blessed with the opportunity to return to Mizzou for my fifth year. This team, coaching staff, and school make it hard to leave. Columbia has become my home away from home. I am very excited to have another year to work hard and compete alongside this amazing team while furthering my education.”

Thompson, a versatile sprinter, has been an invaluable member of the Mizzou roster the last couple of seasons.

She recently placed third at the 2021 NCAA Championships in the 50 free, hitting a lifetime best and Mizzou team record of 21.42, and she chipped in a 10th-place finish in the 100 back. At NCAAs, she was also 21.2 on Mizzou’s fourth-place 200 free relay and 22.4 swimming fly on their 10th-place 200 medley relay. Their finish in the 200 free relay matched a program record for NCAA relay finishes.

Thompson had the fastest 50 free at the 2021 SEC Championships finals, but was relegated to the B-final after missing the wall on her flip turn in prelims. She would still prove quite valuable in her other events, finishing runner-up in the 100 back and fifth in the 100 free while swimming on four relays, including Mizzou’s runner-up 200 relays.

Thompson has qualified for NCAAs all four years of undergrad, but she’s developed into a national title threat and hammer relay leg over the last two seasons. In addition to the 50 free, she holds program records as part of the 200 free and medley relays.

Great! How do you get a fifth year if you competed for all four years?