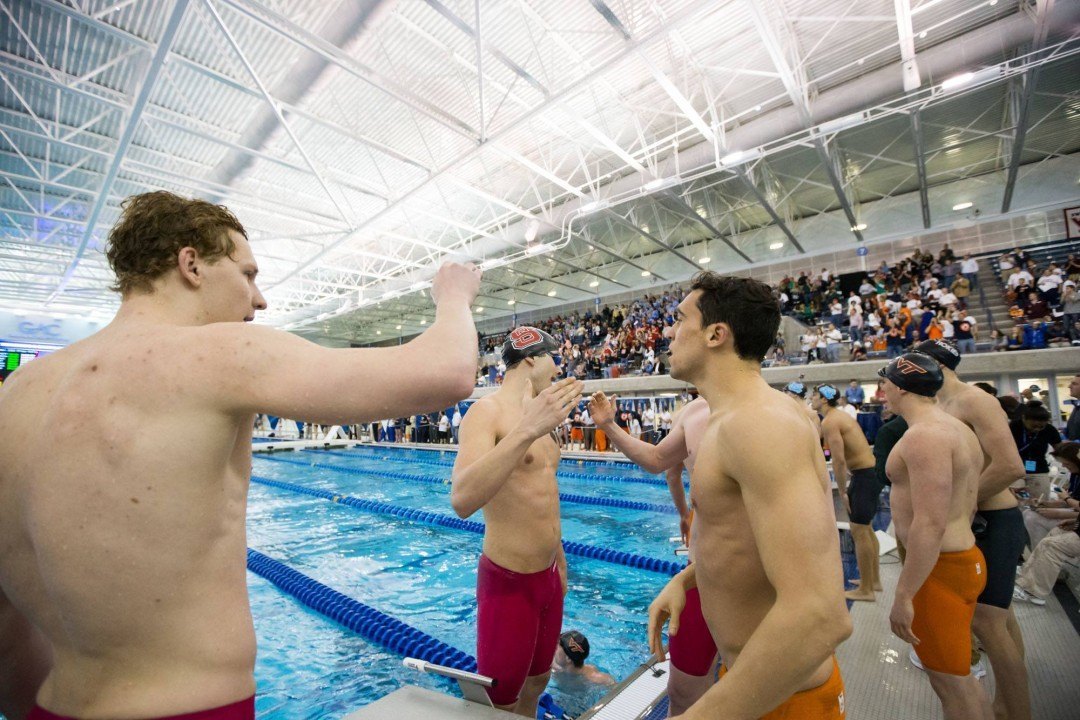 After announcing that NC State was disqualified for an early take-off, NCAA officials announced that the call was appealed and... Archive photo via Tim Binning/TheSwimPictures.com

After announcing that NC State was disqualified for an early take-off, NCAA officials announced that the call was appealed and overturned. That moves the NC State back into the A final with the fastest time of the morning. Their official time this morning was 1:15.79, which is just ahead of the second seed, USC at 1:15.85.

Prior to the new ruling, Stanford was sitting in eighth place with their time of 1:17.03. They will now be the fastest seeded team in the A final. The other team that will be hurt by NC State’s appeal is Indiana. The Hoosiers qualified in 16th with a time of 18.08. With NC State added back in, Indiana will be bumped out of scoring position into the first alternate spot.

This must have been overturned via video replay?

Somebody needs to explain what happened there and how it got overturned. The results show a -0.03. They would’ve won without a jump, but they did jump. Did they argue that -0.03 is inside the tolerated zone of “okay” false starts?

There was also a -.32 on the 3rd swimmer for Florida and they are still in as well. Wonder what’s going on. There was also a problem with, I’m assuming the touch pad, in the same lane 4 in heat 1.

Read the rule book. There is a process, assigned by the Meet Ref to a grizzled veteran Deck Ref. I’m sure the call is a good one based on facts. It has nothing to do with how loud the beef is from the coach.

Thank you Gator. There is a rule book. You can access the rule book on line in seconds. In the rule book, there is a specific page that presents the protocol for relay takeoffs with relay take off pads and the Proper video support. Last week, UNC and UVA had -.06 and did not get dq’d, LSU and SMU had -.01 and did get dq’d. Same protocol.