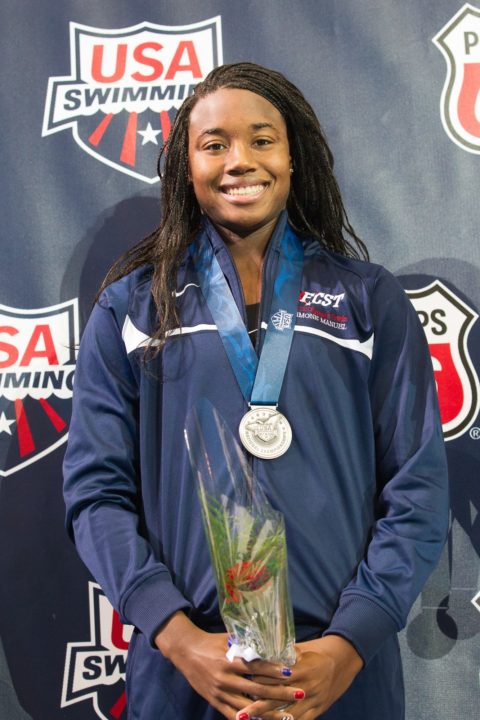 The first draft of the psych sheets for the 2014 NCSA Junior National Championships, which begin next Tuesday, March 18th, in Orlando, Florida, have been released. The list of swimmers participating are a veritable who’s-who among top junior swimmers in the United States, especially in the Central and Eastern time zones. There are also a few standout entrants from the west coast as well to make things really interesting.

Among the names will include World Championship team member Simone Manuel of the First Colony Swim Team in Houston, who will swim the 50, 100, and 200 freestyles, plus the 100 back and 100 fly.

Joining her in the women’s races include NCAP’s Janet Hu, a National Age Group Record holder, and Beata Nelson from Wisconsin, who’s having a breakout season.

The men’s meet will be highlighted by NCAP’s Andrew Seliskar, who will swim the 50 and 100 backstroke, the 200 breaststroke, the 100 fly, the 50 free, and the 200 IM. He won’t swim the 100 breaststroke in which he recently broke the National High School Record (though that record was since broken).

Carsten Vissering will swim the 100 breaststroke as one of seven entries. The second seed behind him in the 100 breast is 14-year old pro Michael Andrew, who has just 5 weeks left to continue running down National Age Group Records in the 13-14 age group before moving up (he already holds 9 of 14 yards records).

He is actually entered in 14 events, a huge schedule, but with an opportunity to swim 50’s of strokes (not eligible for NAG Records as a 13-14), it’s not an overly-strenuous one. The two entries he has in which he doesn’t already own the NAG Record are the 200 free and the 200 breaststroke.

Tennessee commit Sam McHugh, Nova of Virginia’s Townley Haas, and Crimson Aquatics’ Liam Egan are all also entered in the meet. Those three are all very good in very similar races, and could have a huge battle in the 500 free (all three are seeded under 4:20).

You’ve got a typo on Simone Manuel’s events…

Uh missing Junior World champion Gunnar Bentz, he’s going to be up for a few titles on the weekend

Is Raleigh Bentz his sister?

Agree that Bentz can win many titles….but you never know his level of preparation for these events. Seems like there have been a couple where he didn’t rest and only had mediocre (for him) results.

He’s also much better in long course. And that’s a good thing for his international future.

I said a few days ago it could be the fastest SCY junior meet ever in USA.
Wow!
Isabella Rongione
Matthew Hirschberger
Townley Haas
Kylie Stewart
Janet Hu
Beata Nelson
Michael Andrew (hopefully he will scratch a few events because his line-up looks crazy)
Simone Manuel
Katie Drabot
Alexis Wenger
Carsten Vissering
Cassidy Bayer
Gunnar Bentz
Zoe Avestruz
Rachel Wittmer
Sam McHugh
Andrew Seliskar
I’m a little disappointed to not see Caeleb Dressel. The meet is in Florida and we haven’t seen him in action since the US junior nationals last December. But he must be in a big long course… Read more »

BSS sent a lot of swimmers to the Southern Premier meet in Tennessee, so that explains maybe some of the reason they’re not there. It does seem that CD’s shifted towards long course training by the lack of competition in recent months. Should make for a great long-course season.

Dear lord, there are way too many swimmers entered in this meet.. They should prepare for red eye heats.

Considering Michael Andrew’s diversity and ability to excel in so many events, his coach should consider limiting the amount of times Michael swims each event in a given year. Rather than repetitively swimming the shorter races (50s and 100s) which seem to be his best events, switch it up and challenge him to make improvements on the longer events. Yes, I understand he has been improving his times almost every meet but this should be expected out of a 14 year old developing and hitting puberty. During the next few years, we unfortunately we will not be able to see… Read more »

Quite possibly the longest trolling/phishing expedition post I have ever read. OR yes, you are over thinking this…

One would venture a guess they have a plan and in it is heavy on competition. He has gone some longer periods without meets. He is currently weeks away from turning 15 and he is goals of breaking more 13-14 NAGs.

I would also venture a guess that since his training intensity is so high and volume is limited to race relevant activities, he does not need long tapers or several recovery days after meets. Maybe a day, of no or limited pace work. The body isn’t really breaking down in his case.

Not happy I’m going to have to race all these kids next week should be an exciting meet though.

Braden, it seems you have Seliskar swimming the 50 back twice. Looks like one of those should be the 50 free.

Bentz vs. Seliskar vs. Andrews = insane 100 fly final. I think Michael could have a chance to go under 47 if he is not too fatigued from a full weekend of racing this weekend and then straight into a full week of racing. We will see how much stamina he has.

Manuel vs. Hu in the 50/100 free will be my favorite to watch on the women’s side. Hopefully the future teammates can throw up some scary times that will have the whole NCAA turning heads and panicking for next year- Stanford’s relays are going to be insane.

According to the Wisconsin State Champ results, Katie Drabot was already 1:46.2 in the 200 free and assuming she… Read more »