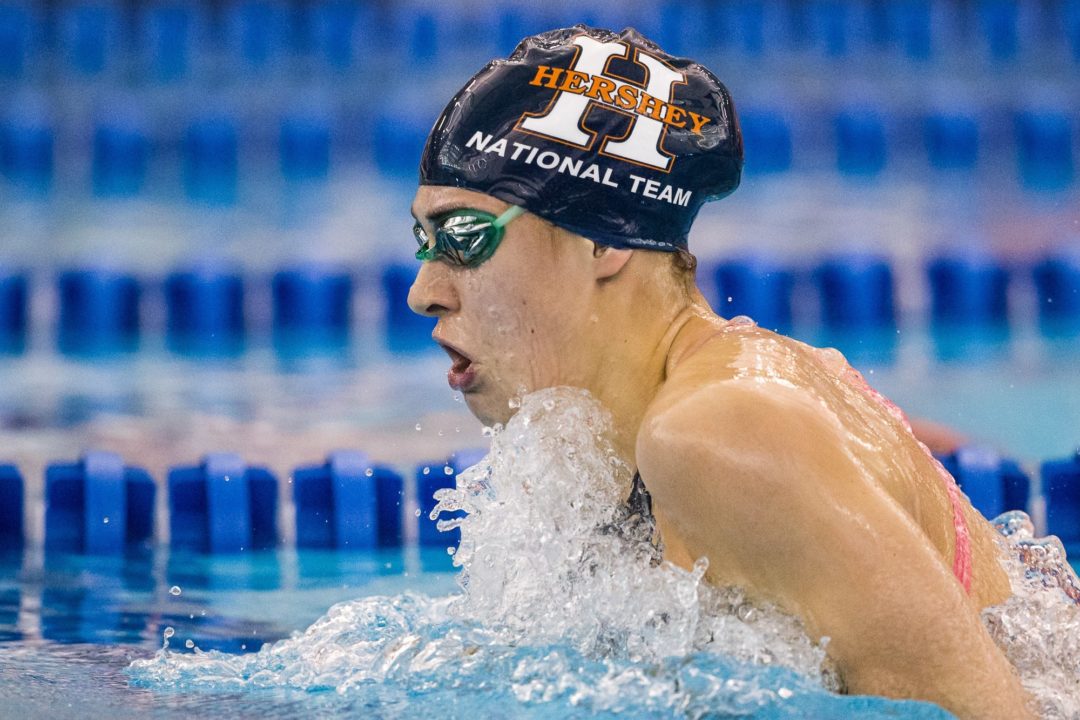 Day 1 of the 2014 PIAA Pennsylvania High School State Championship weekend is through its first day, and the first half of the boys’ and girls’ AAA championships. Pennsylvania splits their meet up by day with the 200 medley relay, 200 freestyle, 200 IM, 50 free, 100 fly and 200 free relay.

La Salle College (yes, it’s a high school) jumped out to an early lead that began with a PIAA Record of 1:30.26 in the 200 medley relay. The team of Kyle Shurmur, Michael McBryan, Greg Brocato, and Nick Stachel combined for a big win over the top seed out of prelims North Allegheny. North Allegheny (1:30.86) and Upper St. Clair (1:31.02).

Upper Dublin struck back with a win in the boys’ 200 free from senior Christopher Devlin, who swam a 1:39.22 to just beat out La Salle College’s Jake Sannem in 1:39.90. Sannem, though, has a very bright future: he’s only a freshman (and that’s not even his best time – he was faster at Districts).

In the 200 IM, North Allegheny senior Zach Buerger won in a breakout 1:45.64. That’s roughly two-and-a-half seconds faster than the time with which he won last year’s state title, marking his second straight state title. The last time he lost this race was in 2012 – when his older brother Matthew beat him by three-tenths of a second.

With the Buerger’s finally moving on, Horsham’s Michael Thomas should become the favorite next season after a 1:46.18 for 2nd in this race; he was the only non-senior in the top five of this race.

In the girls’ meet, Hershey is shooting for a second-straight team title, led by their Georgia-bound senior Meaghan Raab.

They got off to a great start, taking four out of six events on the first day. Raab led them off with Vivi Tafuto, Gabi Broschard, and Colette Robinson as the team swam a 1:42.09 for the win in the 200 medley relay. That broke their own State Record set last year by over two seconds, and more importantly gave them a tight and emotional victory over their nearest competitors from North Allegheny. North Allegheny was .01 seconds behind in 1:42.10.

Tommie Dillione from Council Rock – North took another very tight race in the girls’ 200 free. Placing within a tenth behind her was Parkland sophomore Siena Salvaggio (1:49.48) and CB West’s Quinn MacMillan (1:49.56).

That race was absent a familiar face who is both the state record holder and has swum the race her previous three seasons: the aforementioned Raab. This year, Raab hopped to the 200 IM as her first individual instead, and in the process ran away big with a 1:57.13. That broke the State Record of 1:57.74 set by her future Georgia teammate Emily Cameron from 2011. She now owns three individual State Records – the 100 free, the 200 free, and the 200 IM.

Hershey picked up another win in the next race, from yet another senior, as Madelyn Veith swam a 23.13 to win the 50 free. She beat out Mount Lebanon’s Katie Ford (23.16) and Wilson’s Alexandra Rockett (23.49).

That was Veith’s second-straight 50 free title, and Northeastern’s Niki Price followed that up by successfully defending her 100 fly title in 54.61. She beat out a group of underclassmen that included Haverford’s Maddie Hart (55.37) and Hershey freshman Kaley Buchanan (55.66).

And finally, wrapping up the day in the 200 free relay was another Hershey relay win, touching in a much more comfortable 1:33.81. That was a bit slower than they were last season, but they didn’t use Raab to get the points which is huge. North Allegheny was 2nd in 1:35.38 to keep the meet much closer than just the wins might indicate.