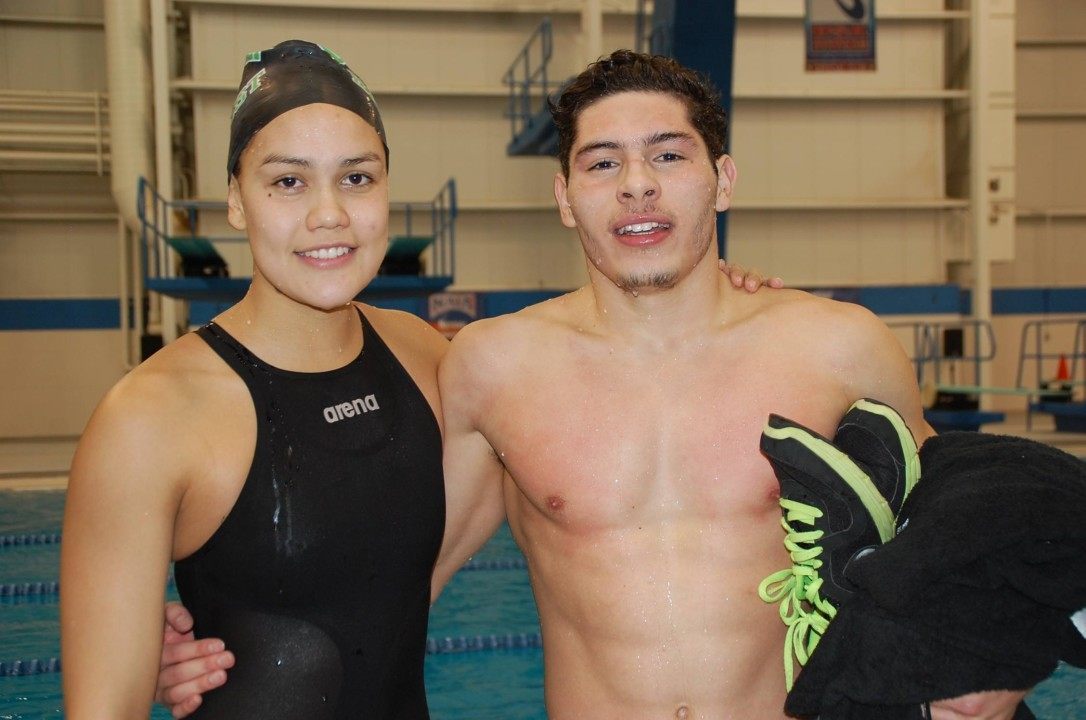 The 2015 NAIA Men’s Swimming and Diving National Championship kicks off on Thursday, March 5 at Oklahoma City Community College. There will be 199 athletes from 19 schools competing in the men’s meet. Oklahoma Baptist University will be trying for its fourth consecutive team title. Led by 2014 Swimmer of the Year, Daniel Ramirez, OBU will be the heavy favorite again this year. In 2014 the Bison won 13 of 20 events and accounted for 52 finals swims and dives.

Ramirez will be joined by OBU national champion, Logan Lassley (50 free) and a deep bench of point-scorers from 2014. In addition, triple champion Joel Ax of SCAD will be back to defend his titles (200/500/1650 free), as will Jacob Anderson of Olivet Nazarene University (200 IM) and Ryan Searles of SCAD (200 back).

Only Oklahoma Baptist and Biola have divers entered in the meet.

Returning champion Logan Lassley (OBU) will attempt to defend his title in the 50 free against David Lambert of St. Andrews, who has the second qualifying time behind Ramirez, Nathan Lethbridge (Union), Josiah Morales (Wayland Baptist), Marc Sambolin (OBU), and Simon Pheasant (ONU), amongst others. (N.B.: Ramirez is entered in six events so he will have to scratch three.)

SCAD freshman Tyler Prescott has the top qualifying time in the 400 IM, but will be challenged by 2014 finalists Connor Wilson (who transferred to SCAD from OBU) and Jacob Lear (Concordia), as well as Alex Mundt (OBU), Joe Brinkman (Cumberlands), Ryan Frayne (St. Andrews), Fernando Morillas (OBU), and Christian Daniels (ONU).

Although he had swum the 200 IM in 2013, this was the first event of the 2014 meet for OBU’s Daniel Ramirez. This year he is seeded at the top by nearly three seconds, with Nathan Lethbridge (Union), Igor Dozortsev (Cumberlands), Marc Sambolin (OBU), Sebastian Wegner (Lindenwood-Belleville), Gabriel Phillips (WBU), Frank Tapia (ONU) Thalys Caixeta (Cumberlands), and Josiah Morales (WBU) waiting in the wings to dethrone the reigning champion.

With many of the top finalists from 2014 graduated, the field is wide open in the breaststroke events this year. Fernando Morillas of OBU has the top qualifying time, but only by a smidgeon over Connor Wilson (SCAD) and Bjoern Globke (WBU). Also in the mix will be Calvin Price (ONU), Ryan Frayne (St. Andrews), Christian Temporiti (SCAD), Marc Tahull (Cumberlands), and Manuel Serrano Laguna (WVU Tech).

A few of last year’s championship finalists are back to contend for the title, such as Jack Cavanagh of WVU Tech, Styrbjorn Torell of SCAD, and Bjoern Globke of WBU, but most of the names are new. Fernando Morillas of OBU leads the field, followed by Manuel Serrano Laguna (WVU Tech), Christian Daniels (ONU), Marc Tahull (Cumberlands), Ryan Frayne and Elliot Boon (St. Andrews), and Christian Temporiti (SCAD).

Oklahoma Baptist is the heavy favorite to repeat their team title, but exciting battles should shape up for second/third, for fourth-through-sixth. Here are our picks for the top ten: