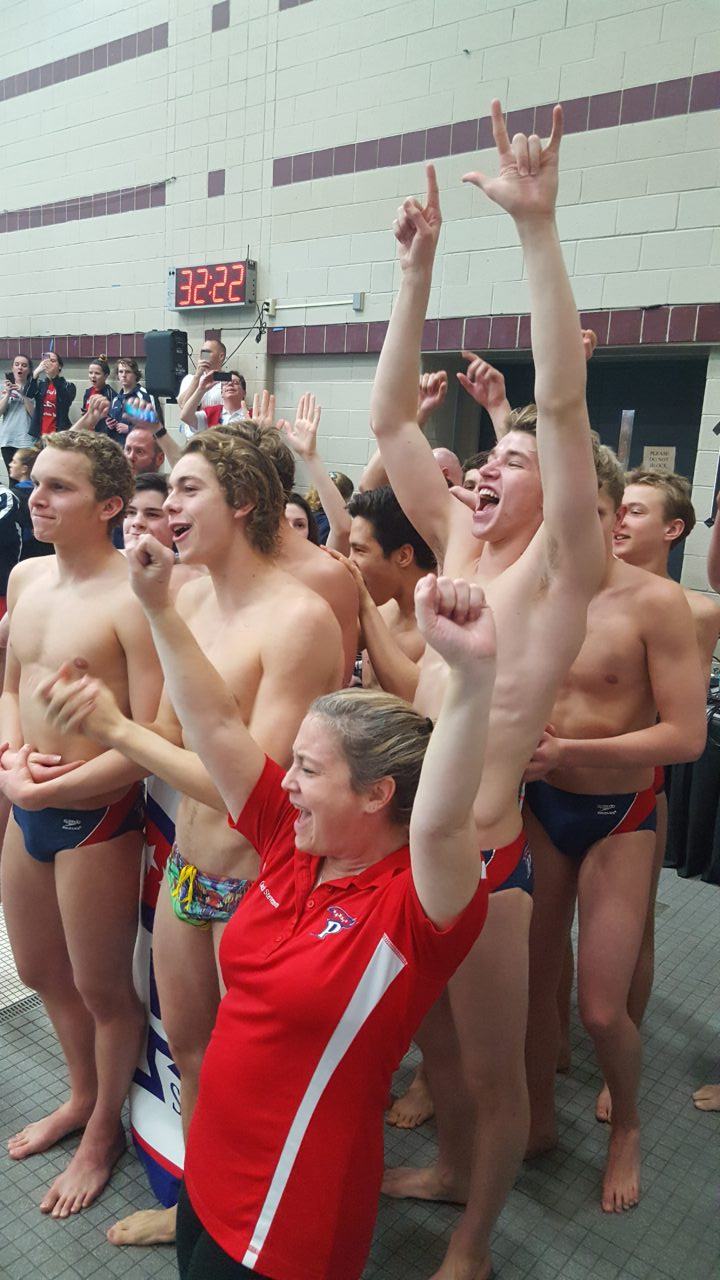 Virginia’s 6A state championship meet on Friday night had a potent mix of ingredients: three tablespoons of high-energy fans, two teaspoons each of awards ceremonies and efficient operations, a pinch of high-quality audio (for swimmer “walk-out” songs), complemented by an easy-to-read board displaying times – with all of this underpinned by six cups of blazing-fast swimming. With these ingredients stirred together and baked for three hours inside the George Mason University aquatic center, the final product was a first-class swim meet befitting Virginia’s status as a hotbed of high-performance high school swimming.

Throughout the meet, swimmers could glance at the mammoth record board hanging in the natatorium and draw inspiration from the multiple pool standards that have been set by a bevy of local legends, swimmers like Jack Conger, Janet Hu, Andrew Seliskar, and Kate Ziegler, as well as some guy, from a few miles up the road in Baltimore, named “Phelps.” And while all of their pool records remain intact, ten state records did fall during the meet (some being the fastest ever across all of the state’s high schools and others the fastest in 6A history):

In addition to his record-setting 100 fly swim, Pomajevich sped through the 200 free in 1:37.47, missing the record held by current Stanford swimmer James Murphy by just .05.

There were a number of standout performances by Langley swimmers. In the 500 free, Isabella Rongione prevailed in 4:46.19, winning back a title she first grabbed as a freshman, and her teammate, Michelle Owens, finished second. In the 100 fly, Joanne Fu had a very strong back half to score a minor upset over Centreville’s Lexington Cuomo, winning in 54.93. And among the boys, Casey Storch defended his 200 IM title, winning in 1:48.80, holding off Patriot’s Will Cumberland, who surged forward in the freestyle leg but just missed catching Storch, finishing .07 behind.

Chantilly’s Lea Gwennap had a very strong meet. In addition to leading off the record-breaking 400 relay, she swam fly on the winning 200 medley relay, while also winning the 200 IM in 2:00.49.

Oakton’s Hallock was equally impressive. Prior to his record-setting 100 free, he also won the 50 free in 20.28. He later anchored the 200 free relay, delivering a come-from-behind win with an eye-popping 19.84 split. He then did the same in the 400 relay, splitting 43.94. Look up “clutch” in the dictionary and you just might find a picture of Hallock.

While it was seniors who scored many of the big wins, there is still a very strong group who will return next year, led by Eksteen, Storch, and Cuomo, as well as a speedy sophomore from First Colonial, Cason Wilburn, who finished just behind Hallock in the 50 and 100 free.

The team titles went to James Madison on the girls’ side and the Patriot boys.

It should be noted that the Patrick Henry girls broke that 4fr record by 3 seconds the next night at the 5A championships.