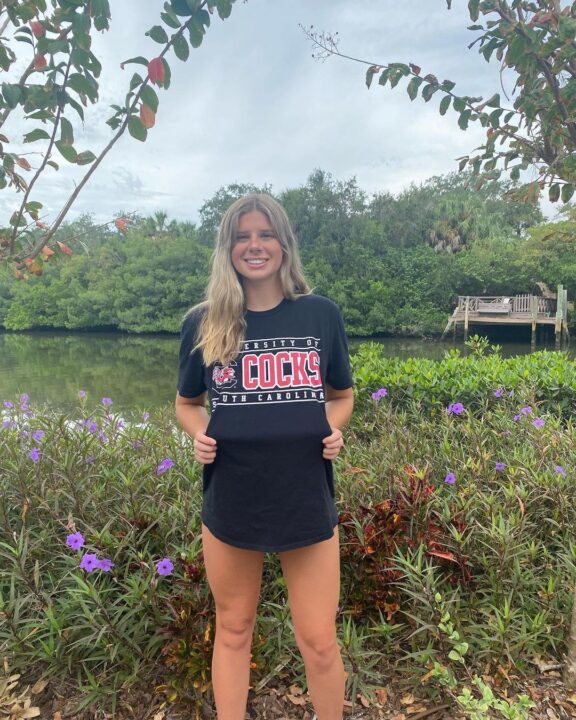 Freestyle specialist Brooke Beede has announced her verbal commitment to the University of South Carolina Gamecocks for 2024. Current photo via Brooke Beede

Brooke Beede has announced her verbal commitment to the University of South Carolina Gamecocks for 2024.

“I am beyond excited to announce my verbal commitment to continue my academic and athletic career at the University of South Carolina. I would like to say a huge thank you to my family, friends and Coach Bill for supporting me and making me who I am today. I would also like to thank the coaching staff at South Carolina for giving me this amazing opportunity. SPURS UP AND GO COCKS!!!🤙🏼❤️🖤”

Beede is a multi-time Florida High School 2A State Champion representing Holy Names in Tampa, Florida. At the 2022 FHSAA 2A State Championships, Beede finished 1st in both the 200 freestyle (1:50.87) and the 100 backstroke (56.73), improving upon the runner-up finish she had in the 200 in 2021. She also contributed to the State Championship winning 400 freestyle relay (51.57 anchor) and the 2nd place 200 medley relay (26.56 backstroke lead-off). Her performances at the 2022 meet helped Holy Names to win the FHSAA 2A State Championship title. At the club level, Beede represents Academy Aquatic Club, where she holds Junior National Cuts in the 100 and 200 freestyle. In addition, Beede also holds Futures cuts in every stroke, except breaststroke, making her a valuable addition to any program.

Even with more than a year and a half left until she arrives on campus, Beede has the potential to be a valuable addition to South Carolina’s roster, both individually and in the relay events. Her best times in both the 100 and 200 freestyle would have ranked her 4th on the Gamecocks’ roster this season, setting her up to contribute to the 400 and 800 freestyle relays. In addition, she would have ranked 6th on the roster in the 500 freestyle, 7th in the 100 backstroke, and 6th in the 50 freestyle, giving her plenty of options for her third event, while also setting her up to also be a possible contributor on the 200 freestyle relay.

Beede’s arrival will coincide with the team’s loss of top freestyler Janie Smith, who is currently a senior and could potentially stay one additional year using her year of eligibility granted due to COVID-19. Smith currently holds the top time on the roster in the 100 freestyle (48.95)  and the 50 freestyle (22.73). She also ranks 2nd on the roster in the 200 freestyle (1:46.53). The roster also boasts several strong freshmen, who will juniors when Beede arrives, including Dylan Scholes and Amy Riordan, setting the school up for several strong relays in the future.

The South Carolina women finished 10th out of 12 teams at the 2022 SEC Championships, scoring 460 points. The team’s highest scorer was diver Brooke Schultz, who won both the 1M and 3M events. At the 2022 NCAA Championships, the team finished 31st with 9 points, all of which were scored by Schultz.

With her commitment, Beede is set to join Reagan Phillips and Emma Reiser in South Carolina’s class of 2028. Reiser, notably, also specializes in the freestyle events with times similar to Beede, setting the team up for depth in those events.