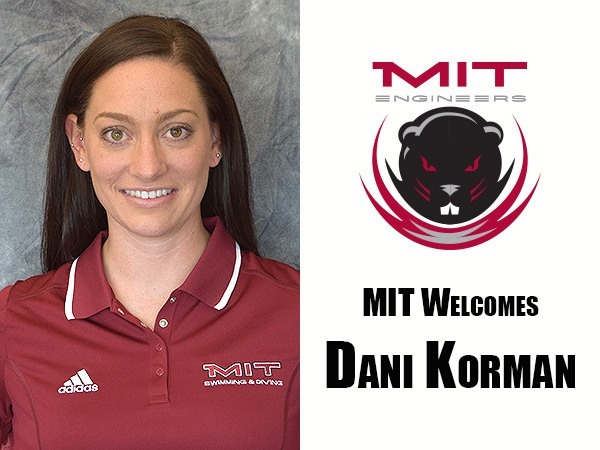 After a national search, Dani Korman has been selected as Head Coach of the MIT men's and women's swimming and diving teams MIT Director of Athletics, Julie Soriero, announced today. Current photo via MIT Swimming & Diving

CAMBRIDGE, Mass. – After a national search, Dani Korman has been selected as the Mary Frances Wagley, ’47 Head Coach of the MIT men’s and women’s swimming and diving teams MIT Director of Athletics, Julie Soriero, announced today. Korman will be joining the Engineers after spending the last three years as an assistant coach with the Yale University women’s swimming and diving program.

“I am thrilled to be joining the MIT community,” said Korman. “I want to thank Julie Soriero, Barb Bolich, and all those involved for providing me with this amazing opportunity. I am honored to lead the swimming and diving program and serve as an instructor within the physical education department. I look forward to building on the team’s past success while coaching MIT to becoming a perennial Division III powerhouse. I am privileged to be able to work with such passionate and dedicated student-athletes. It is my goal to empower them as students, as athletes, and as individuals to achieve their full potential during their time at MIT and beyond.”

During her three years at Yale she assisted with a team that saw improvement each year at the Ivy League Championships, with the 2015 squad finishing third and scoring 200 more points than the season before. The Elis also had three swimmers qualify for the NCAA Division I Championships under her watch, with numerous school records broken during her time in New Haven.

While Korman was at Yale, multiple student-athletes earned All-Ivy League honors, with the team gaining CSCAA Scholar All-America honors in all three seasons. She also served as the recruiting coordinator for the Elis, with her recruiting class of 2018 being named the 17th best in the nation bycollegeswimming.com.

Her prior collegiate coaching experience includes working as an assistant coach at Johns Hopkins University, where she helped both the men’s and women’s teams to a pair of top-10 NCAA finishes. Prior to Johns Hopkins, Korman served as the interim head coach of the Carthage College women’s team where she was named the 2008 Co-Coach of the Year and led the team to its first ever appearance in the NCAA Championship.  In addition, she has served as an assistant swim coach and counselor for the University of Texas/Total Performance Swim Camp.

“I am very pleased to welcome Dani to the MIT community,” remarked Barb Bolich, Assistant AD at MIT. “The applicant pool for this position was strong and Dani quickly rose to the top of the group as the best fit for our nationally ranked swimming and diving teams. Her experience as a student-athlete, coach and educator have prepared her to hit the ground running and I have no doubt her leadership will yield positive and successful results moving forward.”

Korman is a 2006 graduate of Kenyon College where she was part of four national championship teams. She was a seven-time All-American at Kenyon and served as team captain as a senior.  She earned a Masters of Education with a concentration in guidance and counseling from Carthage in 2008.

Congrats to you Dani, you are a superstar!! Hoping to see you on the pool deck sometime soon….next time I’m in Mass I will let you know!