Missy Franklin: What Doesn’t Break You, Makes You Stronger 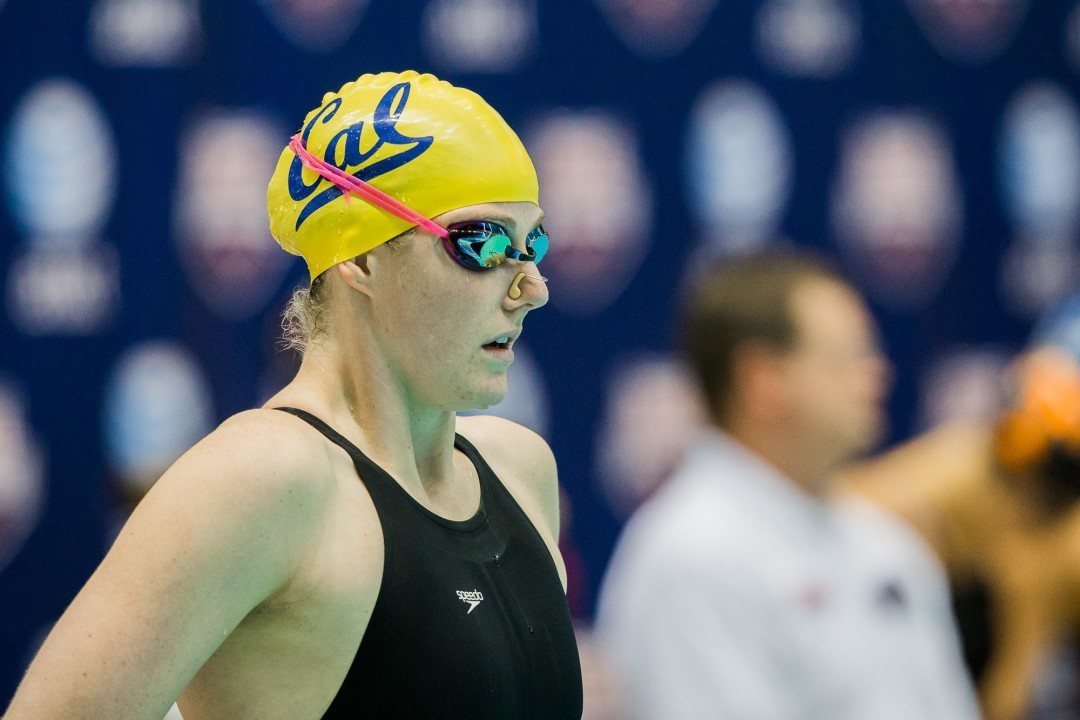 At the 2014 Pan Pac Championships, Missy Franklin suffered back spasms. Six months later, she became the fastest woman to swim the 200-yard freestyle.

Missy Franklin wraps her fingers around the hand grips on the starting block.

She settles her toes into the backstroke wedge under the water.

The Olympic champion backstroker pulls herself up into her usual starting position, water rolling off her back and USA swim cap.

Just like she has done a million times before.

At the top of her backstroke start she pauses, and right then, it happens—a blinding shot of pain sears through her back like a metal rod dipped in fire.

The pain locks her up.

She can barely move without pouring gasoline on the pain.

Team USA coaches and trainers rush over and gingerly pull her from the pool.

With trainers under both arms, she is hoisted to her feet, and they slowly help the 6’1” Olympic champion backstroker, step by step, to an area away from the media where she can be examined by team doctors.

It’s August 12, 2014, and Missy Franklin has just experienced a world-class back spasm during a training session two days before the start of the Pan Pacific Championships.

“I couldn’t walk… I was deadweight,” wrote Franklin in her auto-biography, Relentless Spirit: The Unconventional Raising of an Olympic Champion (Amazon). “The trainers rushed a massage table over to me, but I couldn’t even lie down on it… Your whole body is thrown into a painful clench.”

On top of the frenzy of pain is the doubt and uncertainty of competing.

Would she be able to race in two days time?

“I was terrified,” she said. “I was so scared. I’ve never had anything like this happen to me before, and two days before the meet starts, that’s definitely not something you want to experience.”

She carefully got back in the water the next day.

And by the time the preliminaries of the 200m freestyle rolled around, Franklin felt okay enough to race.

Franklin gutted out the week of competition, but the problems with her back were far from over.

The long road back to normal

After the long flight from Australia back to Northern California, a stream of doctor’s appointments, scans, and MRIs. Franklin had mild scoliosis—a curvature of the spine—and bone buildup had accumulated and pressed on nerves (irritable facet syndrome).

With no guarantee that another back spasm wouldn’t happen, Missy set to work on a physio program to reduce inflammation in her back and lessen the likelihood of her back locking up again.

It would be a long road back to recovery.

And the possibility of her back was seizing up again was very real.

“She wasn’t completely right for the longest time, after Pan Pacs,” said her mom, D.A, a doctor herself. “She was back to her full schedule, getting her strength back, but every week or so she’d have to cut her workouts short because her back was flaring up.”

Eventually, Franklin was doing physio every other day.

But the struggle was real.

And it was taking longer than she had expected to feel like her regular old self.

“Coming back from Australia, trying to fight my way to full strength, I set a lot of incremental goals,” said Franklin. “Trouble was, it was taking a long time to get back to where I felt I needed to be. My back was okay, not great, so the usual goals didn’t really apply.”

By the following February of 2015, six months after the injury at Pan Pacs, and just a month before NCAA’s, Franklin was finally on the mend.

Her form and confidence were coming back as the inflammation and pain faded.

“That’s when I at last felt like I had some control over what was happening,” she said. “The inflammation was gone. The bad days fell away. And I was able to get back in the pool and do my thing.”

That which doesn’t kill me/Can only make me stronger

Franklin feeling like herself hadn’t come a moment too soon.

She would get her chance soon enough.

And the thought of going 1:39 had been on her mind ever since.

“Every day when I woke up for my early morning workouts, when I went to physical therapy, when I did my strength training… I closed my eyes and saw those three numbers.”

1:39 kept her focused on executing the prehab as well as possible.

Of treating the rehab and time away from the pool healing and recovering as part of her training.

“If I felt sluggish, didn’t want to get out of bed, didn’t think I had it in me to power through another workout, I could just close my eyes and looks at that sign. 1:39.”

The final of the 200-yard freestyle would be a heavyweight tilt between Franklin and Stanford’s Simone Manuel.

Before the race, Franklin felt good.

The anxiety of her injury was gone.

“I was really nervous. And, somehow, really calm. I took this as a good sign, because when I was teetering between nervous and calm, that’s when I was at my best. It told me I was excited to swim but also confident,” Franklin said.

When she stepped on the blocks, she knew that despite the strength of the competition, that this was her race.

The work had been done.

“You ever work so hard to get to a certain place, you’re pointed so long in that one direction, you’re dialed in in such a way, that you know you can’t be denied?” said Franklin. “It wasn’t something I could have put into words, wasn’t even something I was thinking on any conscious level. It was just there,” she said.

Franklin took an early lead and never looked back.

She touched the wall in a best time, American record, and along with all of that, the distinction of being the first woman to swim under 1:40 in the 200-yard freestyle.

And by a long shot.

But this victory was particularly sweet because of the trials and tribulations, the doubts and uncertainties, the hard work and grit.

As the relief and pure joy exploded, Franklin was hit by a thought: That which does not kill us makes us stronger.

“That’s a line from the German philosopher Friedrich Nietzsche, and you’ll see it on posters in locker rooms all across the country. It even showed up in a Kelly Clarkson song, kinda sorta,” said Franklin. “And here the same thought found me in that pool.”

every Journey is unique … we know u would have done better in such pressurized conditions .

Is there a video of the race anywhere?

That 139.10 was one of the greatest swims I’ve ever seen. I remember watching it and thinking Simone had a real shot to beat Missy. Instead, Missy just hammered it from the gun — had a body at the 100 (out in :47) and never looked back. Stunning swim. And she’s a better LC swimmer! That was late March 2015 — such a bummer that her injuries did not allow her to have a big Rio Olympics just a year later.

I totally agree. That was stunning to watch.

Missy was all hat, no cattle and perhaps the most overrated female freestyle swimmer ever, winning just one major individual international freestyle swim in her career (200 free, 2013 Worlds) and bombing her individual Free races at both London and Rio. Fortunately, everyone caught on to this at or before Rio, with Team USA coaches smart enough to sub in DiRado for Missy in the 4×200 Rio final.

I doubt 2 world records, 4 NCAA individual golds and double digits international relay golds would make her overrated…perhaps her freestyle performances in long course dont live up to your standards, but a 1:39.10 SCY is, and always will be, an incredible women’s standard.

You could say the same thing about that statement at anytime considering Covid-19 isn’t the leading cause of death in any country.