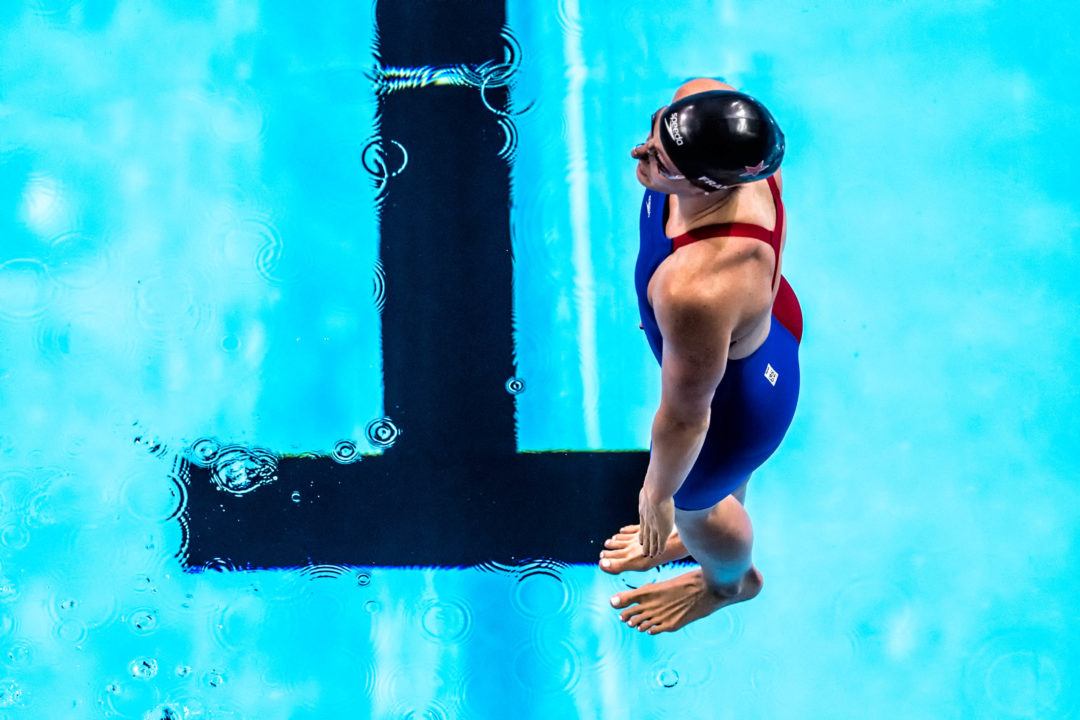 Fittingly, her first race back was the event that stands out among a long list of events where she’s had success: the 200 backstroke, where she’s the current World Record holder.

In that event, Frankin swam a 2:13.61, which qualified her 5th in the event through to finals, behind top-seeded Katinka Hosszu, who herself is making her way back from an extended competition break that didn’t see her race for almost 6 months.

In her follow-up, Franklin qualified 9th in the 200 free in 2:00.51, behind top-qualifying Charlotte Bonnet of France (and also a new revelation 17-year old Ajna Kesely of Hungary in 1:58.53). That swim puts Franklin into the B-Final, albeit a capable B-Final with international-caliber swimmers like Daria Ustinova and American junior Brooke Forde.

Contextualizing these swims are a tricky game, because prior to 2016, Franklin was arguably the best female swimmer in the world and with little argument the best in the world at these events. In spite of two shoulder surgeries, Franklin is still physically-built to be a world-class swimmer at 6’2″ tall, and even moving across the country to train at Georgia, she’s still working with a world-class coach Jack Bauerle who has trained more World and Olympic Champions than most. So, it would have been unlikely for Franklin to show up at her first meet back and lay a total egg.

But the circumstances this year are very different, given what Franklin has been through over the last 2 years. Primarily, it’s good to see her back in the water and battling elite international fields. Importantly, they’re qualifying times for this summer’s National Championships (yes, even 5-time Olympic gold medalists and 11-time World Champions have to hit qualifying times) that Franklin didn’t previously have.

That Picture is special – thanks to Mike’s eye of the tiger placement .

Welcome back Missy! That’s a cool pic…. She looks like she’s standing on the water.

I kind of doubt Peaty will break 58 this year.

Maybe a deserved and smart “off” year for him. No worlds or olympics this year.

He swims one Olympic event, never even tries the 200. Not exactly a grind.

its a response nonetheless with the fighting spirit

Interesting to hear what she has to say about the double. 200 free is very encouraging. 200 back less encouraging. I don’t know. Maybe she was tired for her 4th 200-meter race of the day. Or simply her backstroke is not at a good level yet.

The Olympic channel announcer was terrible. He didn’t seem to know that Hosszu and Tusup have split, and he said that Taylor Ruck was placed “between the two favorites” in the 200 backstroke.

I was hoping he was in charge of the betting lines.

Why do people downvote this?

Mix of my usual fans on swimswam plus Andrew fans who don’t like to see him lose that race.

Not a very even mix right now.

I’m honestly starting to think that somebody has written some sort of script to game swimswam’s voting system to downvote every Bobo post a bunch. Even his most non controversial comments get downvoted to hell.

Fancy Bears. Bobo was #3 on their list behind the DNC and WADA.

Looks like there’s no TV live broadcast this year. I used to watch those Mare Nostrum meets on Bein Sports. Football everywhere. Sorry. I should say soccer.

I already have a football/soccer indigestion….

Soccer will do that to you

Olympic channel has day 2 on it

No olympic channel here in France. 🙂