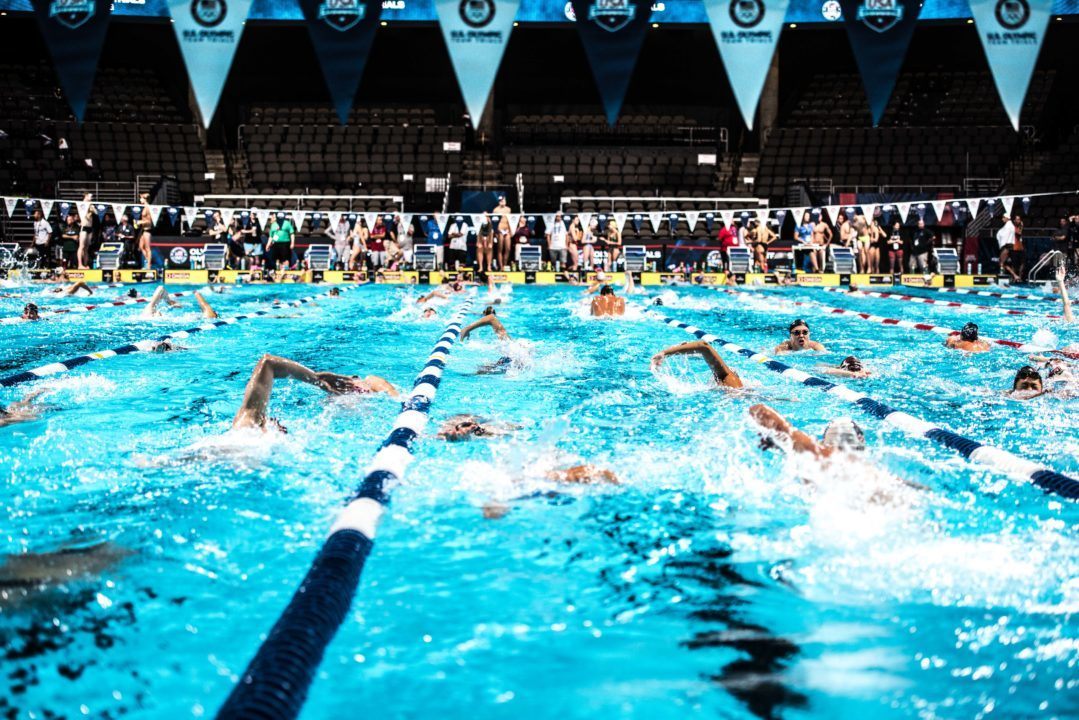 Minneapolis, Minnesota has announced that it is one of three finalists to host the 2024 Trials. If successful, it would take place at U.S. Bank Stadium. Stock photo via Mike Lewis/Ola Vista Photography

Minneapolis, Minnesota is one of four finalists to host the 2024 U.S. Olympic Swimming Trials, Minnesota Swimming Inc. announced on its Facebook page Monday.

If Minneapolis were to win the bid, the event would be hosted at U.S. Bank Stadium, home of the NFL’s Minnesota Vikings, which has a maximum seating capacity of 73,000. Details about how the stadium would be configured for the meet have not yet been revealed, though it’s likely that the capacity would be reduced for the event.

The finalist announcement is the first public news of Minneapolis having put forth a bid to host. Back in August, SwimSwam announced that seven cities were officially in the running, with Indianapolis, San Antonio, and St. Louis the only three to do so publicly.

The Minneapolis bid was submitted by the MNSE (Minnesota Sports and Events), which previously successfully bid to host world-class events such as Super Bowl LII, the 2019 NCAA Men’s Basketball Final Four, and the X Games.

The last three Olympic Trials meets have taken place in Omaha, Nebraska, beginning in 2008, and will return to the CHI Health Center Omaha for the 2021 Trials next summer. Omaha is expected to be among the three remaining cities who have made a bid but have not gone public.

In a letter from Bob Crunstedt, the executive director of Minnesota Swimming Inc., he shares USA Swimming’s vision to greatly expand the Trials in 2024 compared to what we’ve seen in years past.

“USA Swimming is seeking to take the 2024 Trials to the next level, above an arena setting, and every aspect of the MNSE bid presents amazing new opportunities for the swimmers, coaches, and fans,” the letter says. “Feedback says U.S. Bank Stadium, the surrounding venues, lodging, and amenities
make for a very strong bid.”

Indianapolis has hosted the Trials six times, most recently in 2000. Rather than host at the IUPUI Natatorium, where they’ve traditionally held it, they’re proposing to do it at Lucas Oil Stadium, home of the Indianapolis Colts, which falls in line with USA Swimming’s vision. San Antonio (64,000) and St. Louis (82,000) also are proposing high-capacity arenas to host the event, significantly higher than the capacity in Omaha (17,560).

The three other finalists have not been announced as of yet.

An official decision on the host of the 2024 U.S. Olympic Swimming Trials is expected to come by February 2021.

James, where did you see “three finalists”? I didn’t see that in MN’s post. Other inside info?

Yes, wedged between a performing arts center, a concert venue, a hospital, a college, several churches, a Raddison RED hotel, a hipster coffee shop, a park overrun with food trucks, and luxury apartments, US Bank Stadium is really in a seedy part of town.

I mean, look at the photos from The Commons park across the street on Instagram. All of those well-dressed children and small fluffy dogs are almost definitely peddling illicit substances. They’ll probably try to get your kids hooked on drugs on the way into the venue. https://www.instagram.com/explore/locations/1931842393751089/the-commons/

You do have to look out for locals offering tips on hotdish recipes and telling you about last weekend’s fishing trip up north. Pro tip: they’re lying about where the fish are biting, don’t be fooled.

IG can make anything look good. I live in the MPLS metro. I avoid Minneapolis at every turn.

I lived in downtown Minneapolis for 4 years, and miss it almost every day.

That’s a personal opinion that you’re entitled to; however, if downtown Minneapolis is too dangerous for your liking, then I propose that there might not be any urban area with an available 20,000+ seat arena that could host this meet. Perhaps maybe as a suburban Minneapolis resident you just feel the closest connection to this one?

Crime in Minneapolis is similar to or lower than Indianapolis, St. Louis, and San Antonio: three other cities that we know bid to host the meet.

To be fair, any visitors bureau can make an area look nice and appealing. Look at colleges in major metro areas that aren’t in great neighborhoods. Everything you see is nice and appealing but it’s not 100% accurate.

Ok I also spent 6 weeks in downtown Minneapolis in the summer of 2019 and was in that area several times and never saw anything that was concerning.

Like I said: if downtown Minneapolis is a place that you view as being dangerous, then you won’t feel safe in the downtown of any major metropolitan area. And that’s fine if that’s the way you feel, but event hosting selections can’t be made on those basis.

Summer of 2019 is a far cry from recent events. You know this. Your comments are disingenuous and it’s obvious you’re pushing a liberal narrative. Crime has skyrocketed in the area since this summer. People are correct to have concerns. You know this. You got defensive extremely quick. You remind me of people who go to downtown Portland for brunch and act like it’s all good. It isn’t “all good”. You’ve seen the statistics.

I spent 6 months living and training in Edina (a Minneapolis suburb) during the summer. I made several trips into the metro area, including the areas where the looting and rioting were the worst, and I never once felt unsafe. These were isolated events that do not reflect the overall security of the metro. Moreover, the area surrounding US Bank Stadium is beautiful and incredibly safe. I have spent a significant amount of time in that specific area for various swim meets, football, hockey, and baseball games. There is certainly nothing to be concerned about from a safety standpoint.

This would be a dream come true. With the light rail providing service to the stadium, attendees would have a greater selection of hotels than Omaha and easy transportation to and from the venue, restaurants, etc. Call me biased (I am wildly, unabashedly biased) but Minnesota is the best choice possible.