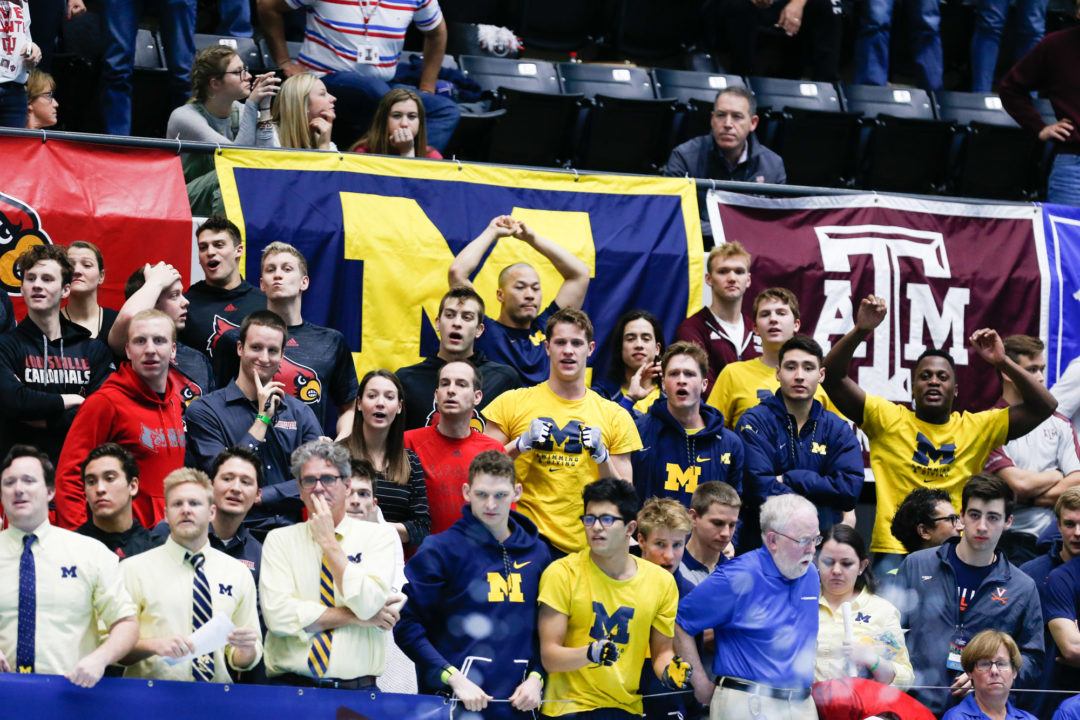 One of the top performers for Michigan was Alex King, who posted lifetime bests in the 50 free, 100 fly, 100 back, and 200 back. Archive photo via Tim Binning/TheSwimPictures.com

Now that championship season is in swing, Michigan held a first chance meet over the weekend. Though many of their stars weren’t in attendance as they prepare for the upcoming B1G Championships, there were a few swimmers on their roster competing this weekend. Ace sprinter Paul Powers made an appearance on the 200 free relay, putting up a 19.49 leadoff split, but their squad was ultimately disqualified. In addition to some of the Michigan men, the Bowling Green women had a couple of swimmers racing this weekend as well.

With the Big Ten Championships beginning next week, the four swimmers put on their racing suits and tried to go faster than their previous in-season and career bests. Goethe, one of the team’s captains, initially went 20.21 in the 50-yard freestyle, but came back for a time trial later in the day, breaking 20 seconds for the first time in his career (19.90). Kyriakidis (20.33) and King (20.48) also went faster in that event.

ANN ARBOR, Mich. — University of Michigan men’s swimmers Jackson Goethe, Alex King, Seth Kyriakidis and Tim Hanson were back in the water on the second and final day of the Michigan First Chance Meet, held Sunday (Feb. 18) at Canham Natatorium.

Kyriakidis had two cracks at the 200-yard butterfly and got his time drop in the second swim, going 1:47.23. Goethe also swam the 100-yard freestyle twice, with his best time being 44.52.

The Wolverines head to Minneapolis, Minnesota, later this week for the Big Ten Championships. The meet runs from Wednesday to Saturday (Feb. 21-24) at the Jean K. Freeman Aquatic Center. Preliminaries begin at 11 a.m. CST, with finals following at 6:30 p.m. CST.

ANN ARBOR, Mich. — Two members of the Bowling Green State University swimming and diving team traveled north this weekend for an opportunity to boost their times in advance of upcoming postseason competition. Sophomore Anna Griesbach and senior Caroline Neely competed in multiple events at the Michigan First Chance Meet, which was held at Canham Natatorium on Saturday and Sunday (Feb. 17-18). Neely swam in the 200 and 500 yard freestyle races, while Griesbach entered the 100 yard butterfly, 100 yard backstroke, and 200 yard backstroke competitions. Sophomore Meghan Burnard was also scheduled to compete but was a late scratch.

Neely shaved time from her seed mark during both of her swims. In the 200-yard freestyle, she entered with a season-best 1:54.77, which she achieved in the C Final at the 2017 Zippy Invitational. This time, she finished in 1:54.10. Neely knocked nearly five seconds off her 500 freestyle time. Two weeks ago on Senior Day against Toledo, she posted a season-best 5:06.57. In Ann Arbor, she improved that to 5:01.70, which currently ranks 28th in the Mid-American Conference.

Griesbach bested season-best times in two of her three events. She began with the 100-yard butterfly on Saturday, where she finished in 59.94 and eclipsed her previous best by 1.2 seconds. On Sunday, she matched that in the 100-yard backstroke, touching in 59.95 to out-pace her previous best of 1:01.01. Griesbach also swam the 200 backstroke and completed the race in 2:15.13, just short of her seed time (2:13.99).

Neely, Griesbach, and the rest of the BGSU swimming and diving team will now head to Athens, Ohio for this week’s MAC Championships. The four-day event will be held from Wednesday, Feb. 21 through Saturday, Feb. 24 at the Ohio University Aquatic Center. The first events of the meet begin at 6:30 p.m. on Wednesday with two relays; individual events will commence at 10:30 a.m. on Thursday. The Falcons finished sixth at the 2017 MAC Championships, breaking a streak of four consecutive third-place finishes.