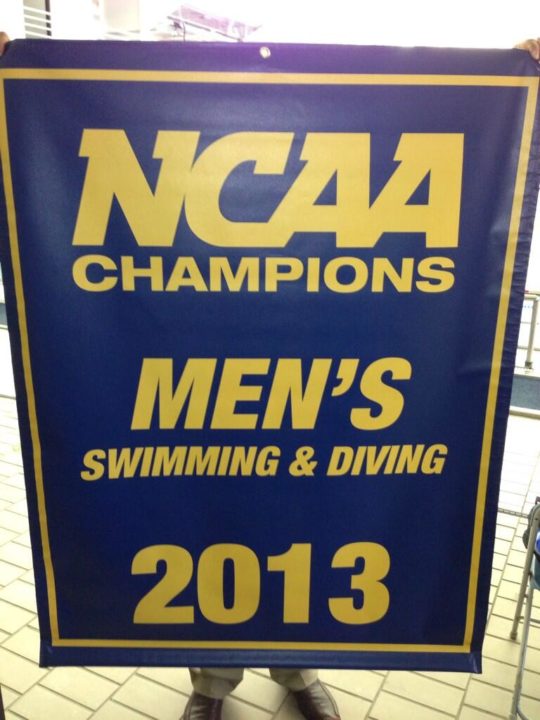 The NCAA banner marking the 12th national team championship for the Michigan Wolverine men's swimming and diving team has arrived at Canham Natatorium.

The NCAA Championship banner marking the 12th national team championship for the Michigan Wolverine men’s swimming and diving team has arrived at Canham Natatorium, as shown above in this photo Tweeted by associate head coach Dr. Josh White.  The win was the first for the Wolverines since 1995, and just the second title from a Big Ten squad since the legendary Doc Counsilman won his final title at Indiana in 1973.

It’s been a big year for the Michigan.  After finishing the dual meet season with a number one team ranking, the Wolverine men stormed into Bloomington, Indiana and won their third consecutive Big Ten championship in dominating fashion, topping runner-up Indiana University by 235 points.  They returned to the Hoosier State a month later for the NCAA Championships, where they kept the two-time defending champion Cal Bears at bay en route to their 12th NCAA title (first since 1995).

Wolverine athletes and coaches have received plenty of awards and recognition as a result of this storybook season.  Connor Jaeger was named the 2013 Big Ten Male Swimmer of the Year and 2013 Michigan Male Athlete of the Year (beating out Naismith Award winner and likely top five NBA draft pick Trey Burke) following his two individual titles at Big Ten’s and NCAA’s in the 500 and 1650.   Sean Ryan recently qualified for the U.S. World Championships Team after finishing second in the 10k open water event.  At last month’s College Swimming Coaches Association of America (CSCAA) Convention in Orlando, Fla., head coach Mike Bottom was presented with the Baton of Victory, which “symbolizes the superior strength and endurance coaches display in inspiring their student-athletes to become champions.”

While the men have to replace eleven huge relay spots from seniors Miguel Ortiz, Sean Fletcher, and Zach Turk, they are still in great position to contend again next year: on paper, the Wolverines are returning at least 50 individual points more than any other team.