Michigan Men, Texas Women In the Lead After Fast Day 1 at Quad Meet 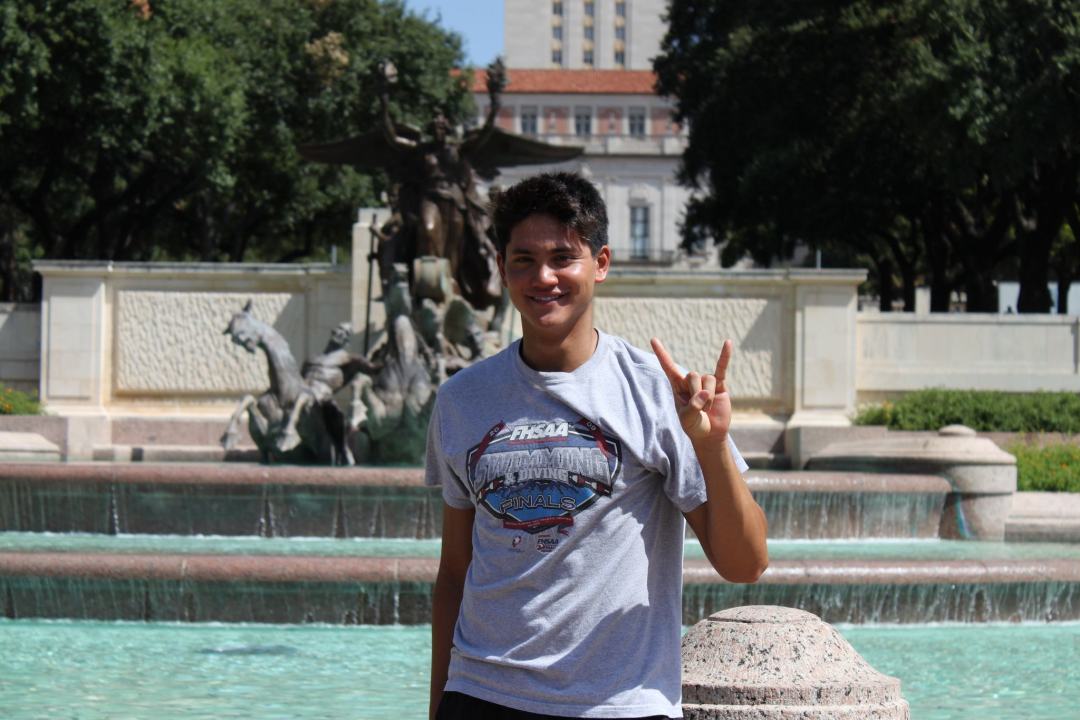 Texas freshman Joseph Schooling is already splitting under 46 seconds in the 100 fly on day 1 of the big Michigan-hosted quad meet. Archive photo via Andy Ringgold

The Longhorns and Wolverines take leads going into Saturday after Friday night’s action at the high profile collegiate quad at the Canham Natatorium in Ann Arbor, while the majority of exhibition races featuring post-graduate professionals were won by Hoosier alumni.

Texas leads the Wolverines 112-74 in the women’s competition, and Michigan is topping Texas 107-79 in the men’s battle. Indiana University’s Hoosiers and the University of Louisville’s Cardinals trail Michigan and Texas, but they are in striking distance to keep the team competition a four-team contest.

Seven exhibition events for a number of post-graduates turned professional also took place on Friday night. Indiana alumni took four of the seven events, Michigan two, the Cardinals one and the Longhorns were shutout.

Competition resumes Saturday morning at 10 a.m. EST. The format is the same as Friday night with the pros racing during the scheduled 10-minute, collegiate breaks. Admission is free, and there’s plenty of fun events for spectators, including a meet-and-greet/autograph session with the Michigan athletes.

The lady Longhorns lit up the scoreboard right away with a 400-yard medley relay win (3:38.87) to defeat Louisville (3:41.02), who edged out the host Wolverines (3:41.02). Indiana’s sophomore Brooklynn Snodgrass took it out hard for the Hoosiers, but the depth of Texas women’s ‘team prevailed over the Canadian’s fast lead-off leg, which contributed to her team’s 4th place finish (3:42.04).

On both the men’s and women’s side of this meet, the medley relays provided some of the best swims of the event. That included a 51.99 butterfly split from Louisville’s Kelsi Worrell on the Cardinals’ runner-up relay.

Snodgrass flew in the women’s 100-yard back (52.48) defeating Michigan’s Clara Smiddy (53.89) by more than a second. Less than a tenth of a second behind Smiddy was Longhorn sophomore Tasija Karosas(53.97), who was followed by teammate Sarah Denninghoff.

Michigan was shut out of the top seven spots in the 200-yard fly, as Louisville’s Tanja Kylliainen (1:56.78), Indiana’s Gia Dalesandro (1:59.59) and Longhorn Kelsey Leneave (1:59.72) took the top three spots and were the only ones in the 16-women strong field to break two minutes.

Michigan freshman Hannah Moore and Texas junior Kaitlin Pawlowicz broke away in the 1000-yard free to take first (9:43.98) and second (9:44.68) in front of the 200-yard free winner Haley Lips, who finished nearly five seconds behind Pawlowicz.

Hoosier Jessica Parratto won the women’s 3-meter event over Michigan’s Carey Chen. Texas took the next two spots to add to their leading point title for the night.

That winning Texas medley included two freshmen a sophomore, and a junior, and is a relay that has a chance to do some real damage this year at NCAA’s, but will be looking at a potential national title run in 2016. Freshman Joseph Schooling split 45.85 on the fly leg, which is unofficially the fastest 100 fly split we’ve seen this year.

Michigan’s A relay actually touched the wall first, but were DQ’ed when anchor Bruno Ortiz left early. Richard Funk split 52.76 on that relay.

Dylan Bosch made it look like a Sunday morning swim in the 200-yard fly (1:43.93), defeating Steve Schmuhl by nearly 2 and a half seconds and shutting the door on the Longhorns’ duo of Joseph Schooling andClark Smith.

Louisville’s Carlyle Blondell is fast, but tonight he wasn’t the fastest in the 50-yard free as was bookended by two Wolverines, 18-year-old freshman Paul Powers (19.79) and Bruno Ortiz (20.20). Powers proved to be the fastest sprinter on the night putting up a time that bested Zach Hayden’s winning time (19.86) in the pro race.

The Michigan men know how to end the night in their home pool. They win the 200-yard free relay by more than a second in 1:18.98, which is an eternity at this level, considering the sprint capabilities these college powerhouses possess.  The Cardinals took second (1:20.14), and the Longhorns third (1:20.31).

Thanks to Loretta Race, coach of the Northern Kentucky Swordfish Masters and SwimSwam contributor, who exercised her Twitter thumbs (@RettaRace) this evening with constant and insightful updates. It helped us put together this story.

looks like michigan men will be right up there with texas and cal come march!

Karosas is a sophomore not a freshman

Texas Medley had 2 freshman, A junior and a sophmore, not 2 juniors. It will be even a faster relay when Kip darmody swims the backstroke leg who won the 100 back last night and Brett moves to freestyle or Murray or Ellis. What is crazy is that Conger might go from being the most valuable asset to not even having a spot on this relay. Caleb Dressel had already given Texas a verbal then switched. Can you imagine this team with him on it and if Hixon would have stayed instead of transferring and winning all the diving for Indiana now!