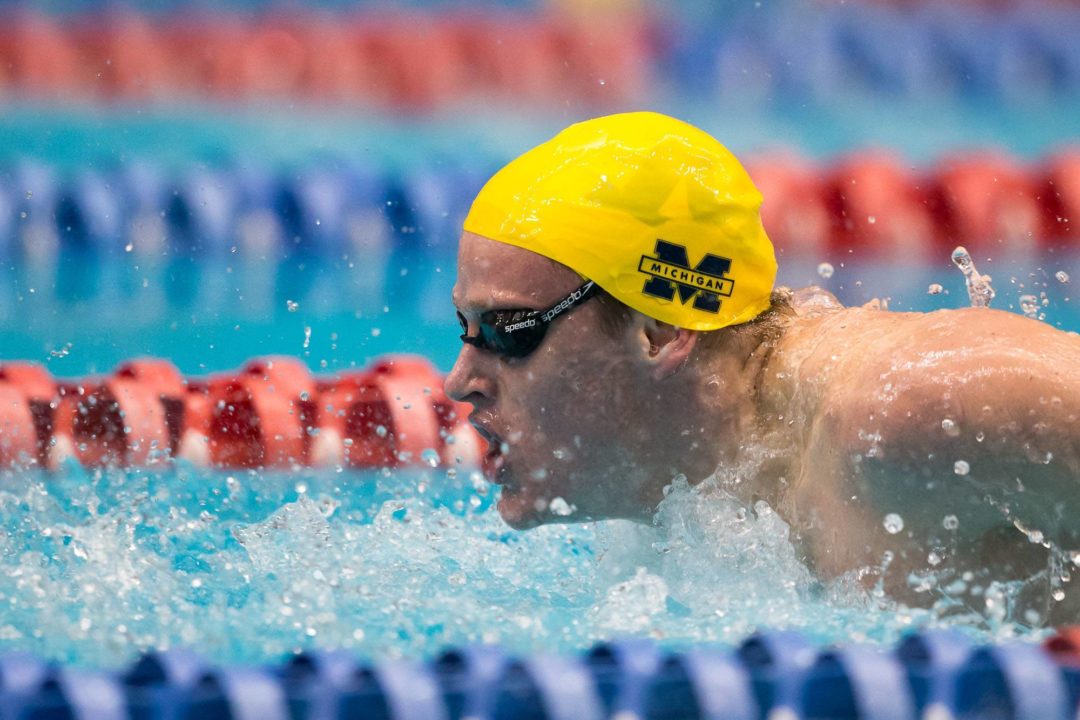 A clash of Big Ten rivals led to comeback wins for the Ohio State women and Michigan men, and the Wolverine coaching staff live-tweeted the meet to offer their candid, mid-meet thoughts. Archive photo via Tim Binning/TheSwimPictures.com

The storied Michigan-Ohio State rivalry landed full-force in the McCorkle Aquatics Pavilion in Columbus today, as the Wolverines and Buckeyes traded blows in a pair of back-and-forth dual meets. When the dust settled, the rivals salvaged a split, with the Michigan men and Ohio State women each coming out on top.

The meet had no shortage of drama, and giving us an insider’s view of the competition was the Michigan Swimming and Diving Twitter account, which the Michigan coaches used to live-tweet the event. We’ve embedded a few of the more notable tweets in the recaps.

Probably the most interesting tidbit from the live-tweeting was what appeared to be a spur-the-moment decision by coach Mike Bottom to suit up several of his butterflyers in response to Ohio State suiting up for a few events in the middle of the meet.

Ohio State put together a huge 200 medley relay to whip the crowd into a frenzy in the first race. Gavin Trebilcock split 22.2 leading off, taking advantage of Michigan’s biggest weakness to stake OSU to a nearly-full-second lead. Keanu Stevenson outsplit Michigan star Richard Funk on breaststroke and Tim Phillips went 20.85 on fly to extend the lead. Bruno Ortiz fought hard with a 19.4 anchor leg for Michigan, but it wasn’t enough as the Buckeye’s triumphed 1:27.50 to 1:28.03.

That led to this Mike Bottom quote to his team, which was recorded for all of posterity on Twitter:

UM takes second “we’re in a battle guys, WE ARE IN A BATTLE” MB

Michigan Olympian Connor Jaeger battled back in the 1000 free, going 9:04.27 to smash the pool record by 19 seconds and eat into the OSU lead. Alex Miller was second for the Buckeyes in 9:11.51, also under the old pool record.

Richard Funk stayed red-hot in the 100 breaststroke for Michigan, though, going 54.61 to beat Ohio State’s DJ MacDonald by .3. OSU did however take the 2-3-4 slots to keep the score close.

Stephen Ettienne won his first of two diving events with a score of 330.83 before his teammate Josh Fleagle went 44.30 to beat out a host of Wolverines for the 100 free win. Fleagle nipped Justin Glanda, Michael Wynalda and Bruno Ortiz, each of whom was 44 in the race.

Ohio State continued its hot streak with stud backstroker Connor McDonald’s 1:45.25 win in the 200 back over Michigan’s Ryutaro Kamiya. Kamiya was 1:45.65 and OSU’s Michael Gallagher was just a tenth behind in third. Feeling the momentum, Buckeye Andrew Braun went 1:58.77 to touch out Funk for the 200 breast win to keep Ohio State rolling.

This was where the live-tweeting got interesting. Michigan’s tweets suggested Ohio State had suited up a few swimmers over the past several events, and Mike Bottom appeared to make a mid-meet decision to suit up a few athletes of his own, based on these Wolverine tweets:

“I’m not gonna lose when someone suits up against us. Going to make things even.” MB #GoBlue#UMDeckPass

It then appears that several of Michigan’s 100 butterflyers suited up and went 1-2 over the top of OSU star Tim Phillips. Dylan Bosch went 46.63 and John Wojciechowski was 46.89 to Phillips’ 47.72.

(Reporter’s note: Suiting up is one of the most overly-discussed issues in regular-season swimming, and we’ve seen plenty of strong opinions on it this past weekend. For what it’s worth: the final score is the final score, no matter what each team elected to wear. These tweets are only included because they appear to give an interesting inside look at one coach’s rationale for regular-season suiting.)

Stephen Ettienne won his second diving event with a 377.25 on 1-meter to tie the meet up going into the final two events of the night. Michigan came out of the diving break firing on all cylinders, though, as Kyle Whitaker and Dylan Bosch 1-2’d the 200 IM in 1:46.71 and 1:46.96 respectively.

But then Ohio State took the 400 free relay by four tenths – the team of Josh Fleagle, Michael Disalle, Steffen Hillmer and Tim Phillips went 2:55.78 to Michigan’s 2:56.18. Both Disalle and Phillips were 43.6 for the Buckeyes. Wynalda was 43.5 anchoring for Michigan, but wasn’t able to run Phillips down.

The meet didn’t end entirely without controversy: results showed a false start on Wynalda for the Michigan relay, and a fairly significant one at -0.11. But the false start was uncalled, and it appears the results merely reflect a touchpad malfunction, which seems the most plausible scenario – it’s pretty unlikely a false start of more than a tenth would go unnoticed by officials.

That left things in a 151-147 Michigan victory, heating things up in a rivalry that will all but certainly continue at the Big Ten Championships in Michigan in just about a month.

DeLoof was entered in the very next event, the 100 free. She got some help from the unique meet format – since the women had completed half their events last night, the lineup tonight slated two men’s events between each women’s race. Even so, DeLoof only had the men’s medley relay and the men’s 1000 before jumping up again for the 100 free, where she finished second to Ohio State’s Michelle Williams, 49.89 to 50.30.

But Michigan wasn’t finished quite yet. Courtney Beidler went 4:14.55 to win the 400 IM, followed by teammate Marni Oldershaw, Carey Chen won 1-meter diving (292.43) and suddenly the score was tied heading into the final relay.

what a bunch of clowns

Could you please explain?

MB tweeting during a meet? What a diva.

IMHO, and I have no connection to either school this is no diva act.” We should applaud him for trying to use social media to broaden interest in the sport.