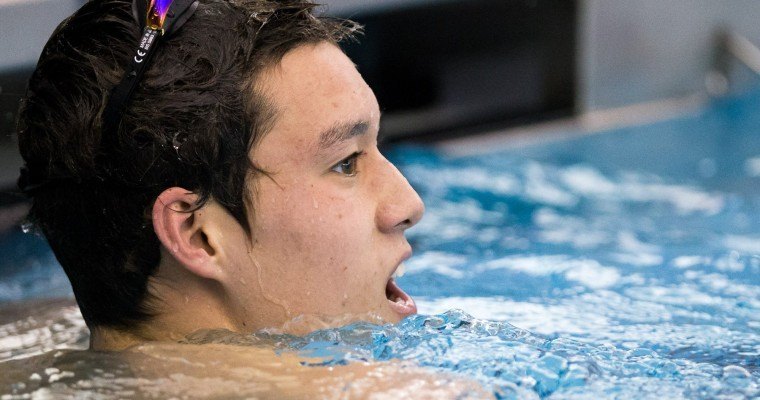 Michael Thomas dropped a total of 12 seconds on Friday to win the men's 400 IM at Bucknell University. Archive photo via Tim Binning/TheSwimPictures.com

Hannah Bellard Breaks Michigan LSC Record With 4:41 in the 500 Free

16 year old Hannah Bellard from Club Wolverine swam to a best time in the 500 freestyle placing her 28th all time in USA Swimming 15-16 age group rankings.

During the yards season, Michael Thomas of the Dublin Aquatic Club made career-turning improvements in the backstroke events that have left him as the #3 recruit in the class of 2015.

This summer, he’s showing off his underrated versatility, which should skyrocket his recruiting stock even further.

That’s an impressive ranking given that Thomas still has a lot of development to go in the long course pool as compared to his speed in short course (for example, he’s a 46.6 100 yard backstroker, but only a 58.0 in meters). Combined with a 2:03 in the 200 fly to win that event on Thursday, this is a successful meet for Thomas, and he’s starting to pile up qualifications for Junior Nationals, if he wants to expand his schedule for that meet in two weeks in Irvine.

He, along with Reece Whitley’s National Age Group Record, were the two highlights on the third night of the meet. Hosted at Bucknell University, these long course championships are a mix of a full-taper meet for some, and an early-taper test for others who are going on to Junior Nationals and Nationals in Irvine.

Other winners on Friday night:

Allie Sekely still not back at her best on breaststroke.
While her backstroke is better.

Meaghan Raab seems to be a much better short course swimmer than long course. At least so far in her career.
You made the remark about Michael Thomas but it’s clear that most of these young swimmers struggle a little bit in long course. But when you train 3/4 of the year in yards, it’s not surprising. The transition to long course is hard.

I saw an interview of Allie on YouTube. She said she hasn’t been practicing breast as much as before because she was so frustrated by her results last summer and instead has been working on her fly/back to improve her IM for high school competition and on her distance free. I hope she is just adjusting to a growth phase and will get back to serious breast training to prep for Olympic Trials, because her stroke is so beautiful when she swims well! I also hope she gets a modern suit, because that could sure help! LOL! In the meantime, I hope she gets some really encouraging IM times this summer.