When ESPN the Magazine releases its Body Issue on Friday, a special annual edition that shows the different figures of... Current photo via ESPN The Magazine

When ESPN the Magazine releases its Body Issue on Friday, a special annual edition that shows the different figures of elite athletes totally nude (with all of the most inappropriate parts covered up), Michael Phelps will be one of 6 cover models.

The different proportions of the different athletes include (based on various official sources):

Even those numbers, though, don’t tell the full story. Phelps has long been viewed as a specimen of the swimmer build because of his wide shoulders, long torso, and relatively short legs.

Phelps has made many appearances on the cover of ESPN the Magazine, mostly surrounding his 2008 Olympic performance. See a selection of those covers below. 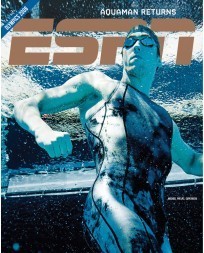 This is the Seniors Edition . 40 year olds & even a married couple have a spread . .Yikes.

There was a happy time when everyone hoped they would be dead by 30 & now they are trying to tell us 30 is the new 18 . I think it is just to sell us more stuff .

Actually, when I first saw the spread on-line yesterday, I wasn’t impressed with any of the photos. Age has nothing to do with it. The Gary Player issue from last year was extraordinary. These photos leave you cold.

I agree. I’m a big Phelps fan but I was NOT impressed with the photography at all. They somehow managed to make his arms look short & his neck is scrunched up wierd. Was there only 1 single underwater shot to choose from? (said sarcastically)