Michael Andrew Will Swim 5 Races at the 2016 Olympic Trials 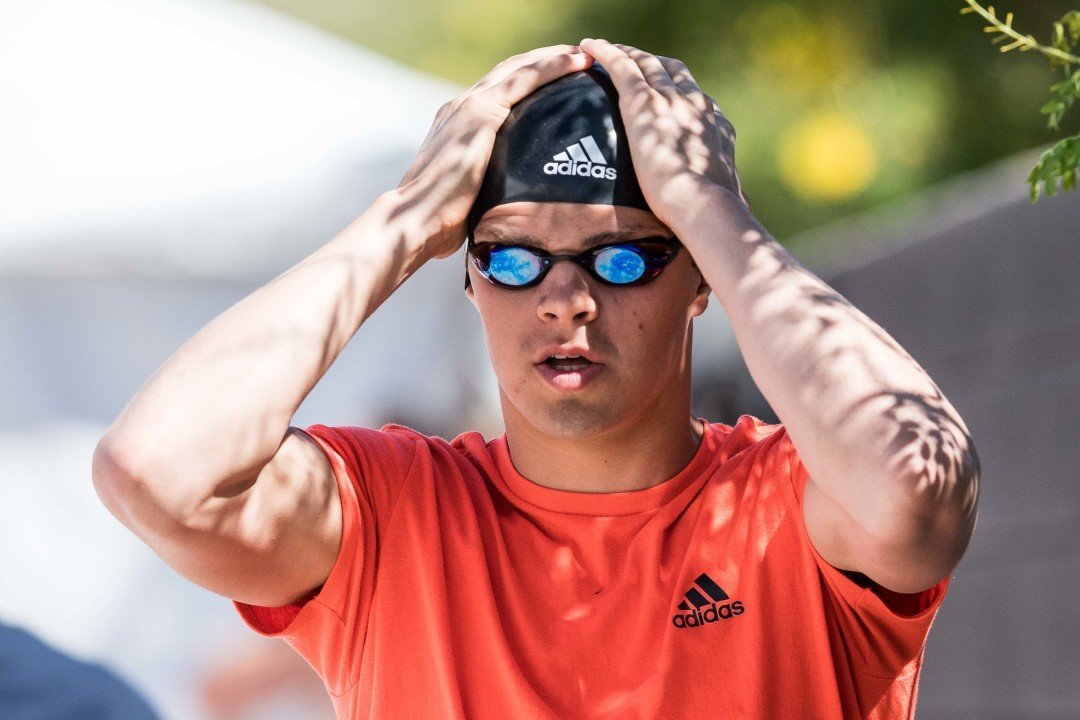 The United States’ youngest professional swimmer, Michael Andrew, will enter 5 races at his first Olympic Trials in 2016. This will... Archive photo via Mike Lewis/Ola Vista Photography

The United States’ youngest professional swimmer, Michael Andrew, will enter 5 races at his first Olympic Trials in 2016. This will be his first Trials as a competitor, though he was present for the 2012 meet as a spectator.

While most of the country’s potential Olympic Trials finalists are keeping their schedules a secret (the psych sheets are due out next week, based on the historical timing), adidas Swimming (the new rename of Team Andrew Indie Swimming) was willing to share the schedule for the 17-year old Andrew who has set over 100 National Age Group Records in his career.

That means that of the 6 “disciplines” in swimming, he’s competing in 4 – excluding only distance freestyles and an individual backstroke race. While the distance freestyles have never been Andrew’s forte, he does hold National Age Group Records in both the 100 and 200 backstroke, and in both long course and short course. The 100 back semi-finals would conflict with the 100 breast final, so-scheduled by the USOC because it’s rare to have an overlap between the two, and the 100 breaststroke is his better chance at making an Olympic Team.

The schedule will give Andrew a maximum of 15 swims across the week. He was seeded in the top 10 in four of the five events among Americans in 2015, indicating he should have a few semi-finals swims at least. His 2015 ranks:

Among those 5 events, the 50 free is the only event in which Andrew has gone a best time in the 2015-2016 season, which was a 22.33. 2016 so far hasn’t seen the same consistent rise that Andrew has been used to out throughout most of his youth career, which his coach and father Peter said could be an impact of some new things they’re trying in training, including lifting weights for the first time.

Here’s the potential schedule for Andrew at the trials:

100 Breast is his best shot at making the team. Hands down.

I mean based on rankings he’s pretty even everywhere. I think 100 br competition is easier though with no for sure slots in the 1 and 2 spots

The talent’s there, but can he go 3 rounds of sub-1:01 or even sub-minute to make the team? Unlikely, but anything can happen!

He has no chance in any event.

Who knows? He’s been postin some good times when he’s been in different/tougher training, so I wouldn’t be surprised if we saw some time drops at Trials

Maybe he’s lining up a pretty decent Junior Pan Pac lineup? Nothing wrong with that.

How does that crow taste?

I’m pretty sure MA is not going to make the team now, but Tokyo 2020 should be a good time for him.

I agree. His 100 Breast is by far and away his best chance, because the competition is so evenly spread across the top 8. Unfortunately I think that he will just miss out, but I’m looking forward to how he does in his other events. Getting below 49.5 in the 100 free would be a good milestone. Beating David Nolan in the 200IM would be pretty amusing for those of us who can’t understand the hype surrounding the greatest yards IM’er ever. If he manages a 51.+ in the 100m fly, his future will look really bright in that event with continued improvement. Can he dip below 22.1 in the 50 free? I wish him well, he is going to… Read more »

Too bad he doesn’t have a shot at making the Olympics.

What???? Lifting Weights???? What’s going on here? That’s totally against the Rushall “scientific” philosophy. Wouldn’t be surprised to see Rushall make an addendum to his theories now – suggesting “some weight training once a swimmer reaches full body growth may be beneficial in generating more power in the stroke but light weights and high repetitions should only be used in order to keep the drag coefficient low”.

I think the Andrews have said all along they don’t prescribe to everything Rushall thinks in everything. I think weights was one of the things, but I might be wrong.

Interesting paragraph in Rushall’s Sprint USRPT paper on page 6.5 (94 of the pdf) regarding land training… http://coachsci.sdsu.edu/swim/bullets/56USRPT50m.pdf

Does Rushall understand the concept of macrocycles? I am not certain that he does.

Pure Usrpt for a period of time leading up to a big meet. Impure Usrpt is best prior to this in order to develop athleticism and prevent injuries.

There is too much hype on this kid

He’s the best age group swimmer the US has ever had! I think he deserves a lot of the hype he gets, but maybe not so early. He’s still young and probably is not going to be heading to Rio as part of team USA.

Ever?
How many world records does he have?

To be fair he IS the best age group swimmer the US has ever had (whether you like it or not) as he has the most currently held American age group records (as of today). He’s not the most successful swimmer in the context of ‘open age group’ world swimming at a specific given time though (obviously that title belongs to Phelps).

But his times aren’t as crazy. Translate it to today, what Michael did then, that would be like a 15 year old going 1:53 in 2 fly today. And then months later, a 1:51.8, it’s that crazy. Of course, there is a limit. And that’s Michael Andrew’s defense. I don’t think Andrew will be a factor in the Olympics till 2020, but he’s looking really great now.

He can have all the national records he wants. We have has many age groupers make olympic squad. His spot in line for the best age grouper is behind all of them.

You are forgetting Mark Spitz who had a world record at 17 and prior to that countless age group records. Hard to say Andrews is the best age grouper ever as Spitz and Phelps were better at earlier ages ….People tend to forget how good Spitz was. He could swim any event he wanted and held world records from Fly to 400 Free. Like Phelps … Spitz was incredibly versatile!

Over 30 wrs by Spitz and Phelps.

Seems like a reasonable schedule. Glad he and his dad learned a little from Junior Worlds last year and aren’t trying to bite off more than they can chew. He might be able to make top 16 in the 100 back but he’s obviously way far off the top 3 in that event.

These trials are to Michael Andrews what the 2008 olympic trials were to Missy Franklin. This is prepping him for the 2020-2028 olympics

about what was expected. he has become a sprinter who can also manage a quality 200 IM