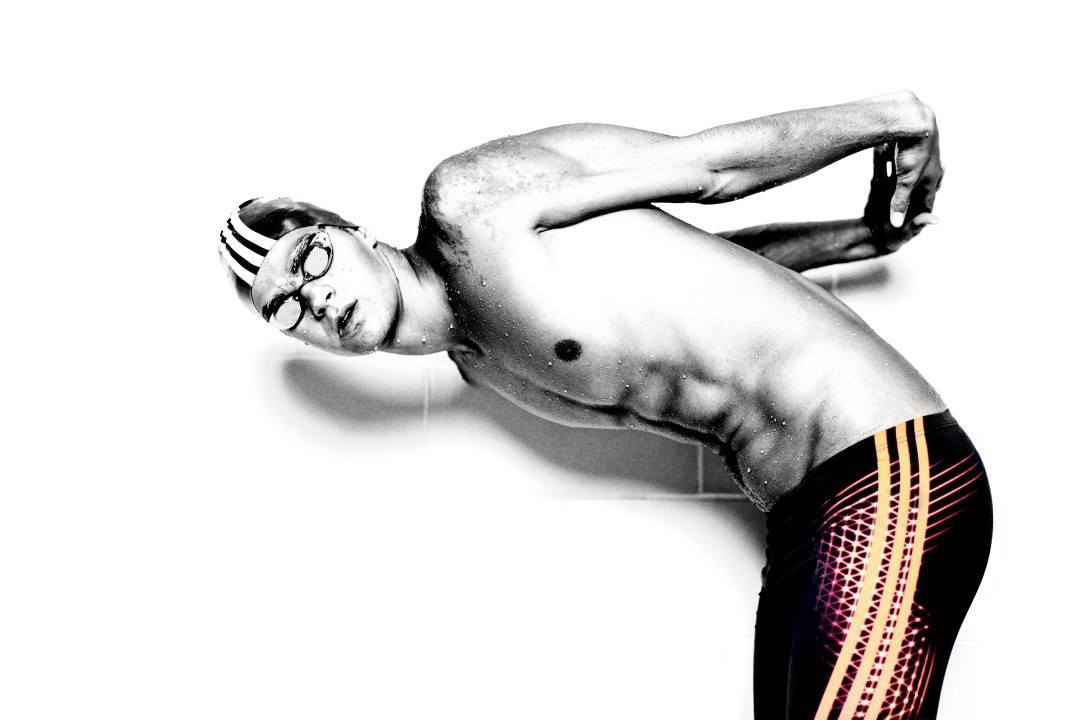 Andrew has broken 76 National Age Group Records and still holds a total of 19, 11 of those short-course yards and 8 in long-course meters. Andrew's most recent record came just this past January at the Pro Swim Series Austin, 1:01.67 in 100m breaststroke.

After already establishing himself as a formidable athlete in the pool, 16-year old phenom Michael Andrew is also continuing to make breakthroughs on land as well.

Andrew was the youngest swimmer in history to turn professional, doing so back in June 2013 at the age of just 14. Andrew had signed with P2 Life, a high-performance nutrition supplement manufacturer, therefore, giving up his high school and NCAA eligibility.

Throughout his young swimming career, Andrew has already broken an astounding 76 National Age Group Records and still holds a total of 19, 11 of those short-course yards and 8 in long-course meters.  Andrew’s most recent record came this past January at the Pro Swim Series in Austin, where Andrew clocked an incredible 1:01.67 in the 100 meters breaststroke to kick-off 2015.

That performance certainly set the stage for perhaps Andrew’s most notable 2015 event yet, the announcement that the young star has signed a multi-year partnership with Adidas Swim.  Andrew will join such mega-stars as USA’s Allison Schmitt and Brazil’s Cesar Cielo in representing the competitive swim brand.  Of the partnership, Andrew states that he looks forward to “swimming in [the brand’s] legendary three stripes.”  If the past is any indication, Andrew seems primed to wear those stripes en route to becoming a legend himself.

Michael is currently the most successful national age group swimmer in the United States and the youngest male swimmer ever in the history of US swimming to turn pro. Andrew already set 76 age group records, among them the 50m long course freestyle making him the fastest 13-14 year old in American history. In 2015 Michael will compete in several national and international competitions, among them the US nationals.

Michael Andrew: “I’m super excited to sign with adidas. The brand has a strong history in swim and sports technology and I look forward to joining the group of adidas athletes and swimming in the legendary three stripes.”

Christine Barth-Darkow, Category Director Swim for adidas Global commented:”Michael’s drive, talent and personality fit perfectly with adidas’ ambition to empower young swimmers around the world. We look forward to supporting Michael on his journey to leave his mark on the global stage – for many years to come.”

What are the child labor laws in the US?

I wonder what would happen with the endorsements if he doesn’t make the olympics next year. As of now, the odds are against him, no?

I don’t think that will matter. He will go for another 4 year cycle anyway, I would assume. http://www.swimbrief.net/2015/06/the-michael-andrew-adidas-deal.html

The odds of him making the 2016 Olympics are pretty low unless we can see some huge time drops in the next year. The US pool of swimmers is too deep. Having to beat Phelps or Lochte in some events + every other US swimmer is a daunting task.

It’s going to be tough for sure. Historically, it much more likely that a teen specializing in 200’s and up to make it than a 100 specialist/sprinter. That’s true on the men’s side at least, with guys like Guyrta, Phelps, and Park Tae Hwan. I was browsing through the old Olympic trails results to try to find the youngest male to make the team in a 100 in modern times. And I could be wrong but I think its Ian Crocker as a 17 year old in the 100 fly. He swam a 52.78 to take first at the 2000 trails. Times have changed, a 52.78 might not even make the final in 2016. MA will probably be faster than… Read more »

Agreed. I think if you look back at the MA posts the last couple years, even during the end of his 13-14 career when he was dropping time like crazy every week, most people acknowledged that 2016 is a long shot. I think he’ll make a couple of A-finals, definitely, but the combination of his youth plus the large number of old elites sticking around makes getting on the team a very tall order.

Still, there’s no shame in missing it as a 17 year old, and I think Adidas is looking at it as an investment. Even if he gets 8th at trials, it will be noteworthy because of his age and training methods. The thing that I… Read more »

Nothing bad. There’s no risk, only the potential of an enormous up side for them both if he makes the ’16 team. 2016 is a long shot for all but a very few and Adidas is smart enough to know that. I think they’re in it for the long term relationship with an athlete who they believe can be a market force for a decade or more based on who he is, Olympian or not.

This is a great thing not only for Michael and his family, but also for the whole USA swimming. Comparing with other sports, those elite swimmers deserve more sponsorship like this.

Maybe USA swimming needs to consider to develop game season like NFL, NBA etc? It will benefit all swimmers and greatly promote swimming itself.

He’s also not in the top 20 in the 100m Breast internationally. Don’t get me wrong those times are fast, but when you start talking elite levels one would assume he’s swimming top 10 times IMO. I think that’s why some are saying they aren’t elite times.

Michael’s situation reminds me of the Williams’ sisters and their father. I have no doubt his parents are well intentioned, but I hope one day he is able to steer his own career. When parents make managing their children a livelihood, it makes me nervous.

Just a baseless assumption. Michael is very involved in the decision making process of his career. It’s not about money for them. They spend FAR more on his swimming than they’re making from it. They’re great parents and they’ve built a strong family that’s defined by nothing as much as love.

Congratulations Michael (and Peter). The Team Andrew has a plan and it is executing it. Whatever works for them and whatever makes them happy. This all makes swimming more interesting and exciting, one way or another.

Congratulations Michael. I hope Adidas makes silver caps. MA is the unofficial record holder of breaking records in a silver cap. Michael, if you are reading this, bring back the silver cap.

another swimmer I am interested in watching this summer, Michael has been pro for two years now and is old enough now that we should start seeing elite level times.

These things don’t happen if you aren’t elite.

But he’s a 16 year old boy 1-2 seconds from being a World Class swimmer. He still has plenty of time to close the gap.

Also, Michael Alexandrov has made a career out of going 101s. I guess he’s no longer elite.

i don’t consider Alexandrov to be elite

I guess it would help if Sam defines his idea of elite. Alexandrov is an Olympian, former American Record holder, and a professional athlete. That’s more than enough by any definition.

I’m interested too. He didn’t drop much time last year with the exception of the 100m/200m Breast and I have no idea how much he actually trained while spending the past several months in South Africa. Maybe we’ll see him go after some NAGS now that he’s at the top of the age group again.

I also think this year and next will give us some good insight into how well USRPT works for a top tier swimmer on the tail end of puberty. Andrew is probably full grown by now so he’s not going to get the customary drops from a teenager going through growth and developmental spurts. He’s getting to the point where his drops will come from… Read more »

Really? I guess majority of the Olympic gold medalists such as Nathan Adrian are not great in your eye?

Just the opposite. The last comment in my post was just making light of an earlier thread where I thought Hulk made a good observation about the 400IM and how we use it as a measuring stick for greatness due to Phelps and Lochte.

If you even make an Olympics let alone medal or better yet win a gold you’ve accomplished something special in my mind.