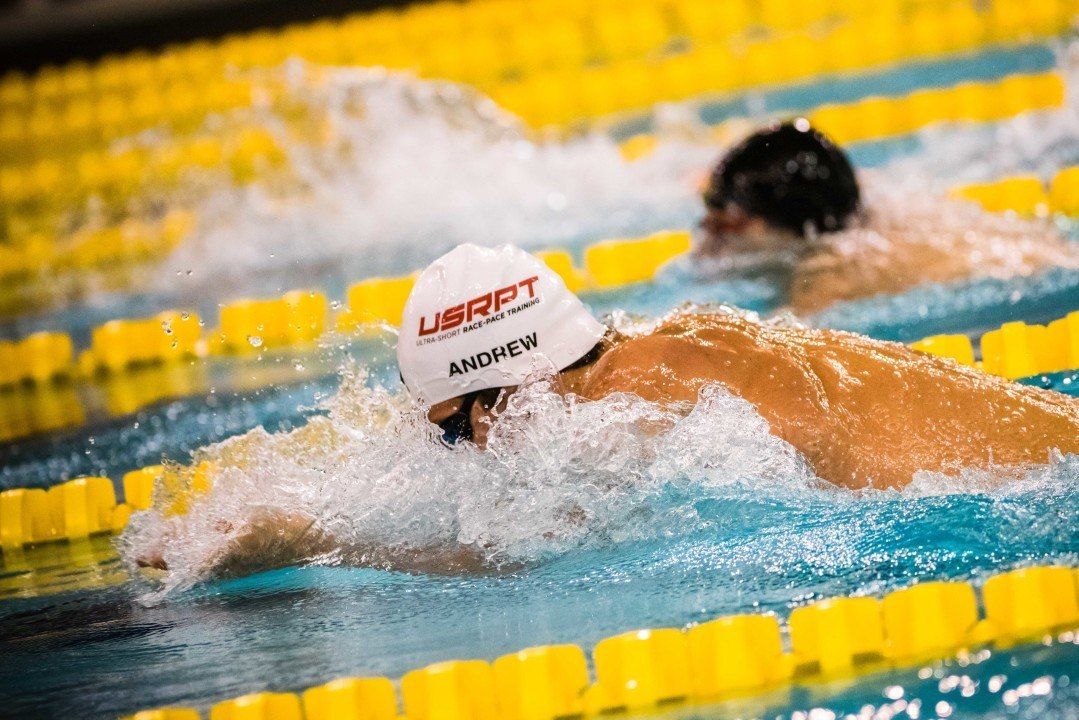 17-year-old Michael Andrew broke the 100 breast National Age Group (NAG) record for the second time in a day, going 1:00.37 in finals at the Omaha Cup.

His finals swim came after a 1:00.46 in prelims snuck under the old NAG by just .01 seconds. The record was previously held by short course American record-holder Kevin Cordes at 1:00.47.

Andrew is starting to heat up after a relatively quiet season, at least in terms of NAG records. Previously in 2016, the only NAG record Andrew had broken was the 15-16 50 freestyle.

Today’s record is his first in the 17-18 age group, and sets him up to challenge for an Olympic bid in the event at Olympic Trials in a few weeks. Currently, only 4 active American men have broken a minute in the 100 breast in their careers.

The World Junior Record still stands a ways off after China’s Wang Lizhuo lowered it to 59.64 earlier this year.

Here’s a look at Andrew’s splits compared to his morning race and Cordes’ old record:

Olympic fever causing everyone to get all hyped up. We aren’t MA, Phelps, Hozzu, Chinese dopers etc. let’s just have fun and enjoy the show guys.

And voting down BoBo more and more as trials and the games approach…. We all loved him before. Give him a break. He’s probably right on all counts anyway!!

I watched the video. The bad news: it looks like US Swimming has chosen identically-colored lane lines for Trials (these are the spectator-unfriendly ones), not the multi-color lane lines that are used in major championship events such as the Olympics.

The outside lane lines are Red and the inside are blue. Look like different colors to me. https://youtu.be/uvAO8C4BNDM

u got stuck in a plain suck wave my friend . Lanes are of a different color .

Just watched the race video and it looks like USA Swimming will have different colored lane lines for the center two lanes at Trials!!!

Looks like he has a very good shot at breaking a minute at OT’s. That is faster than most of us thought possible. Well done MA, next year is going to be a big one.

Don’t forget also that Michael Andrew has until the end of next year to break Junior World Records.He certainly creates more excitement among swimming community than any other junior male swimmer since Phelps!

Congrats once again. 2nd record in one day.
Looks like he puts all his focus on the 100 breast in that olympic year and that’s smart. By far his best event.
Nice to hear some good news about MA after a quiet season so far.
We were so used to fast swims from him week after week. A little bit like Hosszu.
I’m not a specialist but does it mean he changed his URSFSDXCBYABKMP training regimen to become much more “traditional” by swimming tired in season with no great times and then resting for the championship season with time drops?
I’ve read he has started to lift weights too. That’s a revolution! 🙂

I shudder when I read some comments…. 😆
Honestly I’m more interested in seeing him compete, try to make the final and how he does against the veterans rather than being obsessed with the times.
At trials only the places count.
I prefer seeing him improve round after round, finish 5th in 1.00 low in final and not break the minute at trials rather than going 59.80 in prelims and then swimming a bad semifinal and missing the final.

And don’t expect me to bash the swimmers! You got the wrong guy for that job. There are specialists for that on swimswam.

You may not bash swimmers directly. But I’ve seen you doing it in passive aggressive way many times, including making insinuations without any basis about some great swimmers.

You got personally insulted when we called Michael Andrew’s two NAG record swims in one day as PHENOMENAL. You even tried to rewrite the meaning of “phenomenal” to justify how you feel about MA’s swims (just like how you tried to justify the meaning of “poll” in another thread when arguing with others).
You stated that this is the minimum MA should do, including getting under the minute at trials. Naturally, I can only assume you will keep undermining MA if that doesn’t happen.

this nonsense is ruining this site.

As much nonsense as all the people predicting times to a hundredth of a second to concoct imaginary relay scenarios! (Think of a number as long as USA comes first.)

I have different (read: lower) expectations than Messrs Gigi when it comes to MA at the trials.
I don’t care if he doesn’t final and/or doesn’t beat any veteran or even if he doesn’t go under a minute. But I’ll be very disappointed if MA doesn’t break his new 100 breast NAG record.

There I said it.

He is getting closer to the minute mark. Maybe next weekend !