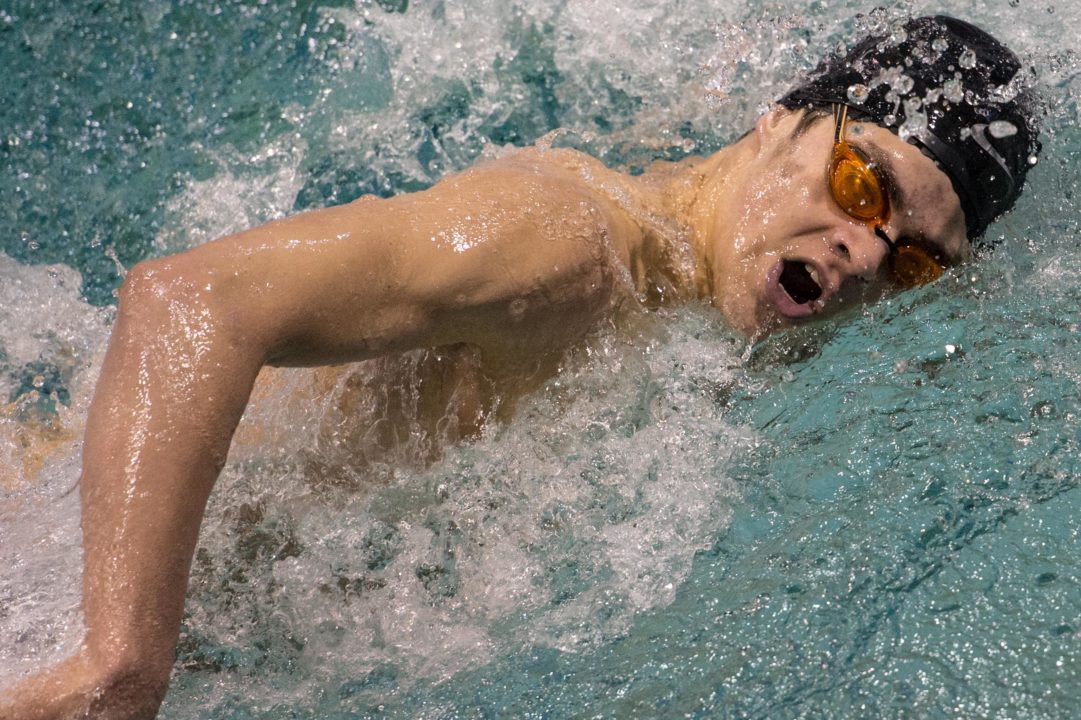 14-year old pro swimmer Michael Andrew has re-broken his own National Age Group Record in the 100 yard breaststroke, swimming a...

The TAC Titans are hosting the Polar Plunge, though the hefty majority of top swimmers racing here are their own, including NAG record-holder Claire Curzan.

Andrew now holds the 6 fastest times in this event in the history of the age group, and is 1.8 seconds clear of Reece Whitley’s second-ranked 55.61.

He wasn’t the fastest swimmer overall at this meet in the event, Texas-bound high school senior Austin Temple was a 52.87 in the 16 & up division. That time is within a tenth of what Texas’ breaststroker split on their 400 medley relay at NCAA’s on Thursday.

Andrew followed that swim with a 43.90 in the 100 free, which also broke his own National Age Group Record of 44.16 set in February. Andrew split 20.66/23.24 en route to his second record-breaking swim of the session.

Andrew is near a level where he will go from a promise to a: How good he will be?With these new times, i will not be surprised with a new time reduction in his 200IM.

Those times are unreal. One has to wonder just what the future holds for this young marvel. Olympic greatness or Chas Morton infamy? Time will tell.

MARCH 2000…
Y2K hasn’t destroyed society… N*SYNC are doing their best to destroy society… and a young Michael Phelps is approaching his 15th birthday. He’s training long course to take on Tom Malchow and Tom Dolan. Won’t beat them that year, but he does become the youngest male national teamer in the modern era.
He wasn’t desperately trying to run up the NAG scoreboard before he aged up.

At this point, we get it: Michael Andrew, you are ridiculously fast… for your age. Now is the time to start looking ahead, and trying to become the fastest MAN in swimming, not just the fastest boy. Good luck – we’re all looking forward to seeing what you can do.

Agreed. Breaking NAG records is one thing, racing amongst men is another. Can’t wait!

Floppy: Remember, this is supposed to be fun. So many kids are home just playing video games. And he is having fun, and having a good time seeing the country and spending quality time with his dad (whose birthday was today, by the way) The years kids spend time with their parents go by quickly. And, with this style of training, he is teaching his body to perform at the highest level, while making technique improvements at maximum speed. Did you see how little time he had between those 2 swims? It would be a big advantage in international meets where you swim each event up to 3 times. I see real improvements in his technique in the last few… Read more »

I’m a bit confused here. He is dropping time, breaking barriers we never thought would even be approached, and gaining a ton of race experience. What exactly is he doing wrong? Yes, he’s breaking NAGs, but I don’t understand how getting faster is undesirable when trying to become the best. If you want to be faster than Phelps was at 15, it’s helpful to be faster than Phelps at 14 (which, again, is an expectation only imposed on him by people who don’t know him, and not by Michael’s parents. Their endgame isn’t Rio as a 17 year old, that’s just one stepping stone in their path). Yes, he is ridiculously fast for his age, and as he becomes a… Read more »