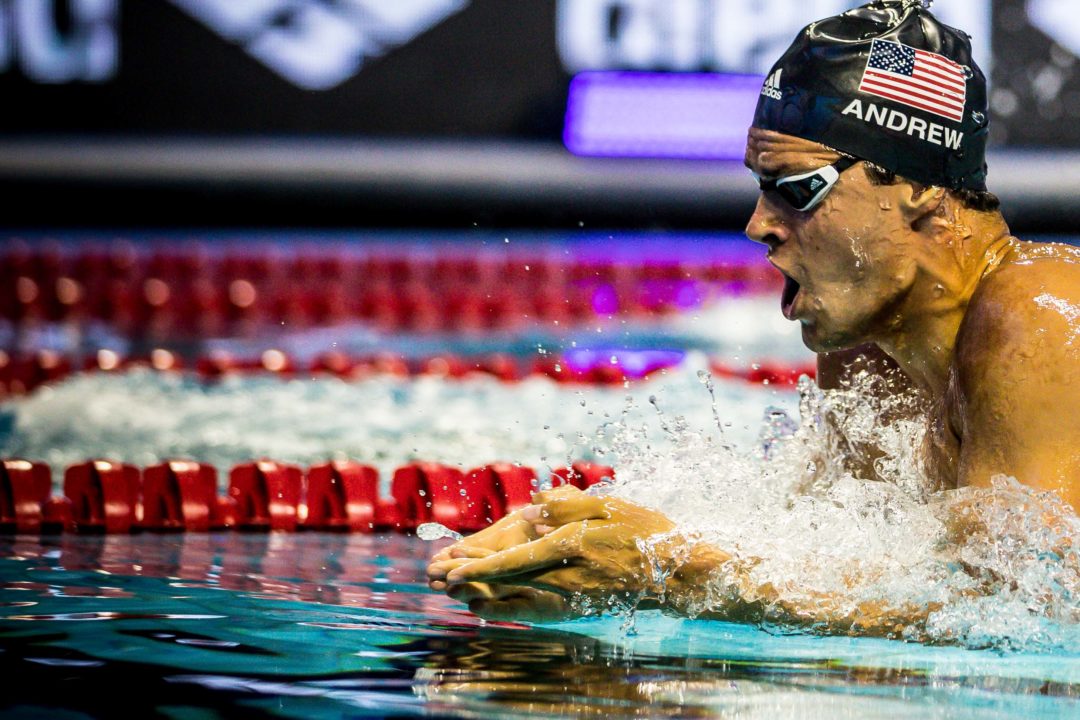 Michale Andrew is still weighing his options for looking ahead to the 2020 Olympic Trials, but he does reveal one piece of interesting information Current photo via Jack Spitser/Spitser Photography

With such an absolutely stacked field, fans could expect a close race,  and sure enough, it was as tight as it could be at the finish. So tight, in fact, that the Breakers’ Michael Andrew and the Current’s Matt Grevers touched at the same time, 23.38, tying for 1st place. The Trident’s Jeremy Stravius (23.49) and Andreas Vazaois (23.51) were close behind, taking 3rd and 4th.

The Current got hit by the DQ bug again, as Shane Ryan drew a disqualification after initially finishing 4th.

Andrew has really come on in the 50 back. While his breaststroke and freestyle are still probably his best Olympic hopes, the 50 back was his standout swim of last season in long course, and he comes up with a clutch win here, tying LA’s Matt Grevers. LA had a nice finish in line, but Shane Ryan took a DQ – he was involved in the relay DQ earlier based on his exchange with Will Licon, and those points are hurting LA badly. It’s got to be a little disappointing for DC – Stravius won this event in Naples, but finishes just third here, though he was a tenth out of first.

Swim everyday and miss the team.

@skoorbnagol. Surely you don’t believe this. Are you willing to wager 100 bucks that Michael Andrew will not make the Olympics team?

I’d take that bet- at this point he’s an outside chance in the 50 free, 200 IM, and 100 breast, abd I doubt he’s able to show up more than some of the other rising folks in those events

How is he an outside chance in the 50 free? I would say after Dressel that he is right there with Adrian

Because there’s probably 4-5 guys who realistically have a shot at one spot. I’d say any of those are outside chances simply because it’s a 50.

If he takes a breath at all, it’s over

@Blackflag82. Not really sure how to do it. If Michael Andrew fails to make the Olympic team, I’ll donate 100 bucks to your charity of choice. If he makes it, then you can donate 100 dollars to my daughter’s swim club’s Swimathon.

@Mustangswimdad – That sounds like a good deal to me…regardless of the outcome everyone wins! mine would be Bike Athens in Athens, GA…what’s your daughter’s club?

perfect! we can check back in on June 29th

I cant understand why he has had little improvement. Probably has nothing to with swimming 1,000 meters a day and surfing.

Agreed. Especially with the prelims-semis-finals format. You could have a great swim in the semis and not recover for the final. This is especially true for the 200 IM. You need some ability to recover quickly.

Does he ever attend the team USA training camps at the OTC?

He bought a squat rack and a bunch of weights after Worlds. Thought he was going to be serious about getting stronger. It’s apparently just become the world’s largest paperweight.