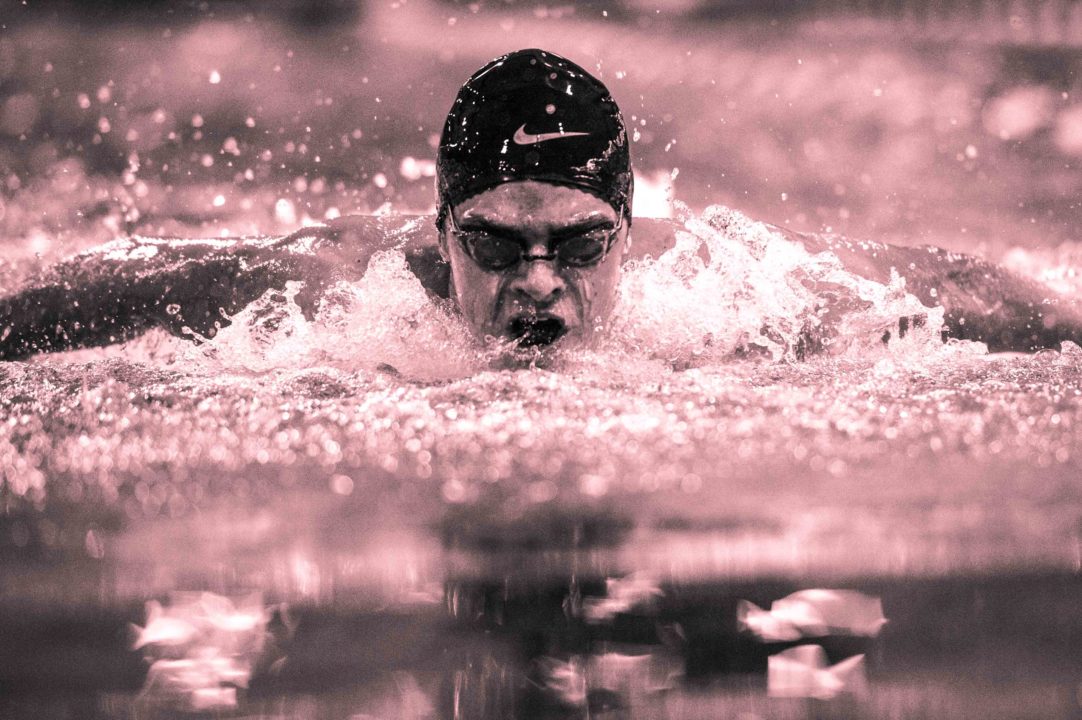 14-year old pro swimmer has broken most of the 13-14 yards National Age Group Records in the last year. Now he’s begun into the meters marks as well with just over a month to go before his 15th birthday.

On Friday evening, in his first final, Andrew swam a 54.59 in the 100 long course meters fly at the Plantation, Florida sectional championship meet. That knocks four-tenths off of his previous best time of 54.98 from the U.S. Open last summer, and also breaks the 2011 National Age Group Record held by Justin Lynch in 54.80 from 2011.

Lynch would go on to break Michael Phelps’ 15-16 mark last summer in the same event.

That swim placed him 2nd overall in the meet, behind only Croatian Olympian Mario Todorovic, who won in 54.43.

Once this record is ratified, Andrew will add it to 13-14 long course marks previously set in:

Love this… Indiana boy representing. He is amazing.

Given his splits, I’d say a 53 is possible any day with a good swim. It looks like he was a little timid taking it out, and coming back only 2.5 seconds slower.

I agree that the transitition to long course looks hard for most of the young US swimmers who train from September to March in yards. .
But Michael Andrew is used to that. He swims a meet in yards one week and then a meet in long course the next week.
Anyway, 54.59 is a new NAG record.
And for the 462nd time of the season, I say congrats.
He will swim a 53 next summer.

I disagree, I don’t think he’s used to that. He’s had a switch from short course to long course once, maybe twice (I could be forgetting a meet), in the past six months. He still managed to break records at that meet, and now this one, because he’s stronger and better conditioned than he was in August. Still, I think even if his progress (physical/technical) stopped completely for the next month, the LC times he sets at this meet would still drop just from getting used to racing in the longer pool.

That’s just my opinion, though, and you’re more than welcome to your own. There’s really no way to know who’s right, but I think we’re both happy to… Read more »

I agree his IM is the most impressive, and I wouldn’t be surprised to see a 2:01high in the 200 by August. Can’t go wrong training for the 400 IM, and that’s the event that will further validate him to whatever skeptics remain by 2016. Not that I think he’ll make it in 2016, but I think by then we’ll be willing to acknowledge that expecting a 17 year old to make the Olympics in a post-Phelps world is unrealistic.

wow… still impressive. I witnessed justin lynch go 54.8, and thought that record would not be touched for a while. MA going 54.5 is IMPRESSIVE

They come in threes. Friday, one down 2 to go.

There is a lot of comparison to Phelps Yards times.. but Did Phelps ever REALLY took yards seriously?? The guy who at 15 was WR holder of 200 fly LCM.. his SCY does not correlate at all.

I agree that Phelps didn’t swim many yards meets, and that if he had, his SCY times would have been faster, but I’m not sure where this came from. The article itself was comparing Andrew’s time to Phelps’ and Lynch’s times at the same age, but in long course. And we all know that Phelps swam the crap out of long course, so it’s a fair comparison. I don’t see any mention of Phelps’ yards times in either the article or the comments (except for ours, of course).

Sven.. what I am trying to say.

When andrew breaks a SCY record… there are hundreds replies.. when he get on what REALLY Matters (Sorry for SCY lover folks) there are much less responses and credits.. Should not be the opposite?

Ah, I see now. You’re right, it’s funny how that works. I think this particular reaction (or lack thereof) is due to the fact that his drop from last summer to now was relatively small compared to how his yards times have improved, and they all think he could be going faster. Yes, a 54.5 is a fantastic time, but when the commenters think he could be 53.9, they’ll tend to not get as excited. I don’t think anyone’s intending to withhold credit from Michael, we’ve all just started to feel entitled to absurd time drops every time he gets in the water :-).

I chalk it up to re-adjusting to long course. Once the season gets moving, he will… Read more »

I know I am gonna get a lot of hate for this but……..I am not impressed. I really needed to see a 53 low in the fly. This is not much improvement from last summer.

He means by Michael Andrew’s standards. Duh this time is mindblowingly impressive, but for Andrew it is less of an improvement than I expected. I would expect 53 high from him soon.

In that case, I apologize Kevin T.

It always takes my swimmers a few meets to really get into the long course groove. It may seem silly to compare what goes on in my kids’ heads to what Michael’s mindset is like, but I really think this is a factor, no matter who you are. Racing most of the past 6 months in short course (one, maybe two long course meets during the winter) and then changing gears to LCM is tough.

Yes, theoretically he should be faster and stronger than he was last summer, and I’m sure he is, but I think he’ll have to warm up. We’ll see a 53 out of him before the summer, no doubt in my mind. Hopefully he gets it… Read more »

Not impressed. I expect a 47 soon. (Sarcasm intended)

Thank you Kevin T 🙂 It took me a while to think of it!

Why are you posting anonymously? Why not go on the record?