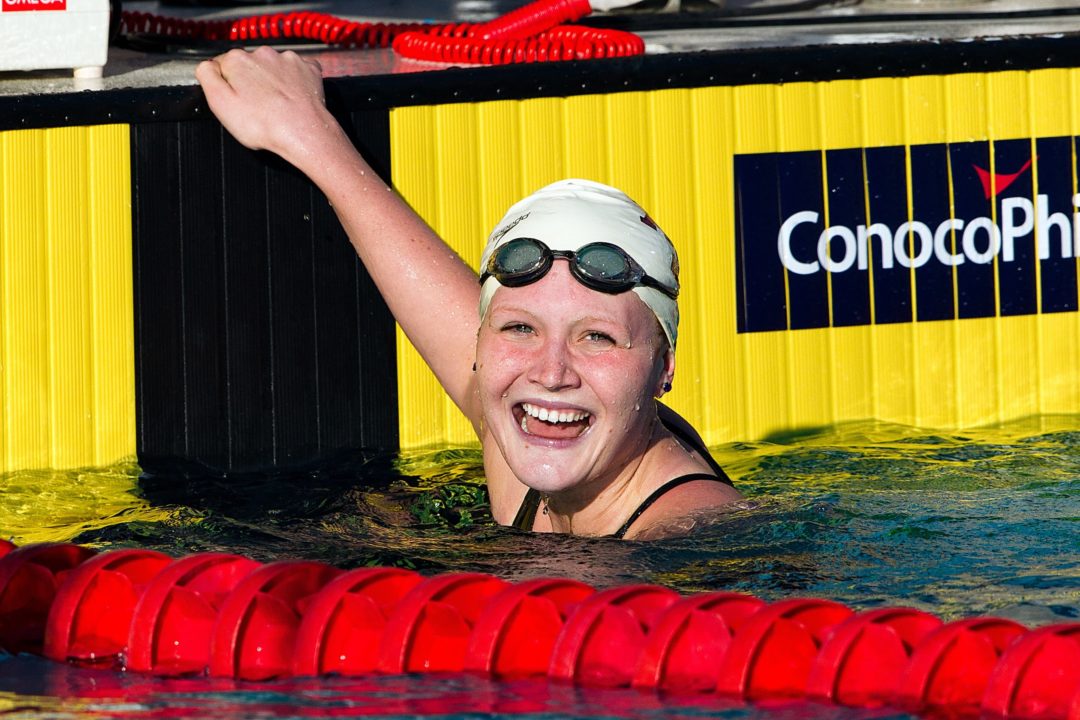 The Mexican Swimming Federation is absolutely on-fire through the first two days of their 2012 Olympic Trials in Monterrey: the first under the tutelage of new head coach Dirk Lange. Even before Lange’s hiring, the federation seemed to be on an upward cycle, and they rolled that wave to two National Records, and an additional 24 National Age Group Records in the meet’s first three days. That’s a staggering total, and speaks to the improvement of swimming infrastructure at the youth level. We also saw several FINA “B” times, which put swimmers in good positions for the Olympic Team.

Coach Lange was notoriously tough on qualifiers during his time in Germany, but that program was in an entirely different evolution than is Mexico, where encouraging achievement and experience for the young swimmers is a key.

Texas A&M swimmers have thus far have provided most of the highlights of the meet. Sophomore Erica Dittmer won the women’s 200 IM at this meet in 2:16.39, which is a new Mexican National Record. That crushed the old record of 2:17.62 held by Fernanda Gonzalez from 2010.

This is not Dittmer’s best time (she’s been a 2:15), but it’s still a National Record as she only formally changed her sporting nationality at the beginning of the college season after winning the C-Final at last summer’s USA Swimming Nationals in this race.

Dittmer was born and raised in Houston, but her mother is a Mexican and Dittmer holds a Mexican passport. That swim is a FINA B qualifying time – making her the third Aggie swimmer this year to earn an Olympic spot in the event (though Canadian Julia Wilkinson decided against the race for London). At last year’s NCAA Championship in Alabama, she finished 11th in this race in yards.

She was hoping for a best time, but was still satisfied with the 2:16 under the flag of Mexico perhaps being enough to put her in London.

Her teammate Rita Medrano, the only swimmer graduating from A&M’s 6th-place NCAA roster, won the women’s 200 fly at this meet in 2:11.10 (just off of her 2:10.84 from the World Championships last year). It seems as though she’s swimming through this meet with the expectation that the swim from Worlds would be sufficient to put her on the team. She would go on to win the 100 fly with a 1:00.19, which is her best time since 2010 (and just .03 off of the National Record).

We haven’t seen the third Aggie, Lili Ibanez, in a final at this meet (though she swam prelims of the 400 free); she redshirted her sophomore year at A&M with a bad back injury, but is back in action for this meet. She will be the favorite in the 50, 100, and 200 freestyles and should easily make the Olympic Team.

In the men’s 200 IM on Wednesday, Ezekiel Trujillo broke a National Record with a 2:03.14. That broke the mark set from a 2003 swim by Diego Urreta in a 2:04, which was one of the oldest records on the books in that country. Trujillo just turned 22 and is really hitting his stride. This time is a second-and-a-half drop from the Pan Am Games in October where he placed 4th. He’s an outstanding backstroker (he split a 30.7 in this race), but needs badly to open and close his swim faster. This was his best chance at Olympic qualification, though on Thursday he would tack on a win in the 200 back in 2:02.93. Though that was a best time by over a second, it just barely missed the FINA “B” time.

On Tuesday, in the women’s 200 breaststroke, Melissa Rodriguez broke the 17-18 National Age Group Record in the 200 breaststroke with a 2:30.41 – that easily clears the Olympic “B” time and puts her under consideration for the Olympic Team. Dittmer was 2nd in that race in 2:31.86.

The aforementioned Fernanda Gonzalez, who lost her National Record in the 200 IM, won the 200 back on Thursday in 2:14.01. She ripped through the National Record books at the Columbus Grand Prix in March, and has quickly gone back into full training. She cleared the FINA Automatic Qualifying Time previously, and as such is secure in her Olympic qualification.

Great that you are covering swimming from all different countries, with a positive attitude: that’s the way to go!

Those of us who love swimming say a big Thank You! And congratulations.

Here’s a slogan: If you swim, you’ll make waves at SwimSwam!

Did Dirk write this article? I think they are counting the age group records in this total. I checked out the senior results and VERY FEW senior records were broken during the first 3 days!! VERY FEW!!!

If DIttmer swam US Nationals last summer as an American, wouldn’t that make her ineligible for the Olympics via FINA’s one year international competition quarantine?