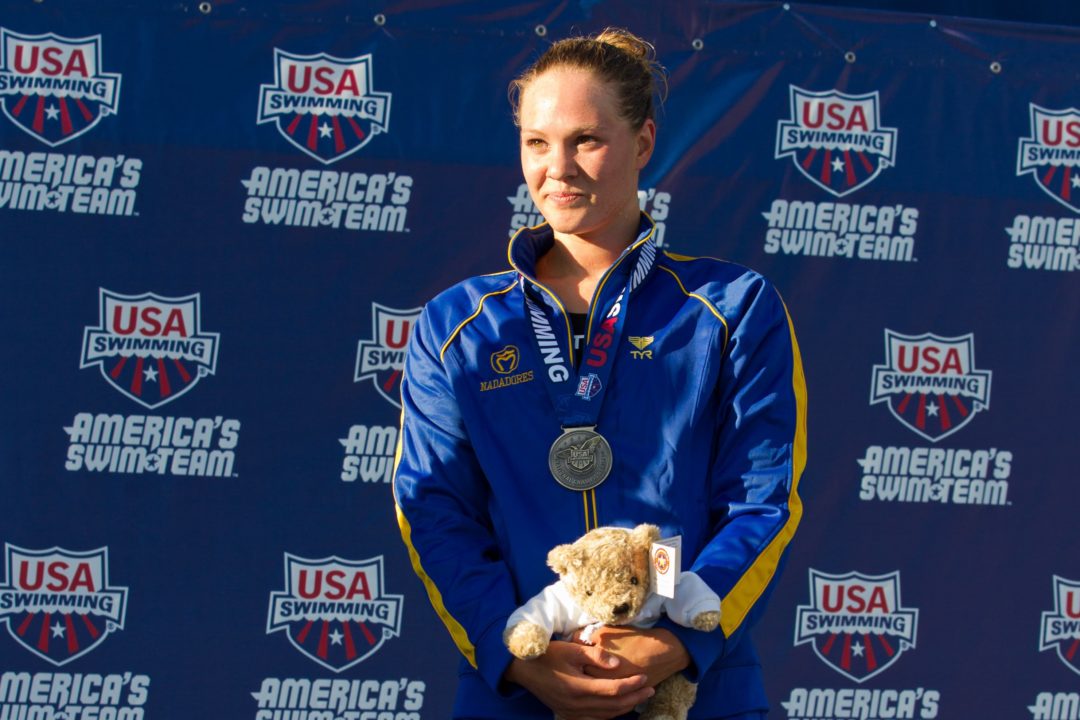 Chloe isn't the only elite athlete in the family. (Photo Courtesy: ©Tim Binning/TheSwimPictures.com)

…North Carolina State is looking for a new assistant, as Stephen Thompson is departing the program after only one season. His former college coaching stop was 6 seasons at Lewis University, which was a perennial top-25 team. He was a distance guru, and was part of a renaissance in Raleigh that saw 14 school records go down under Braden Holloway. That included 9 out of the 10 school records (the men’s 200 medley was the only one unbroken). According to a department spokesperson, Thompson left on good terms with the program, but is going to pursue a career outside of swimming…

…American distance star Chloe Sutton chose not to compete at the NCAA level, instead turning pro. Her little brother, Colin, is going a different route, and according to his mom’s facebook will be headed to the University of Coloardo. The younger Sutton, a junior offensive lineman at Orange Lutheran High School, stands 6’5 and 285 pounds. He won’t be able to officially sign until the fall, but making his decision early will help alleviate the strain of going to different camps to raise his recruiting stock. That should free him up to watch his sister swim in Omaha and (maybe) London. ESPN.com rates Sutton as the 2nd-rated offensive guard in the state of California, and among the top 50 recruits in the state at any position. Their father, David played college football at Air Force…

…Brazil has announced their initial, 16-swimmer roster for the 2012 London Olympic headed into next week’s last-chance meet. Pereira has confirmed the expected, and will be entered in only the 200 and 400 IM’s individually (and maybe the medley relay assuming nobody beats his time at the trial). At the trial, swimmers will have a chance to claim individual spots in races that are not already claimed by FINA A times. There are also relay spots up for grabs in the men’s 400 free relay; Cielo and Oliveira are set as the individual qualifiers, but either of the other two spots can be claimed at this meet by bettering the 48.79 of Marcelo Chierighini. The squad, thus far, is below…