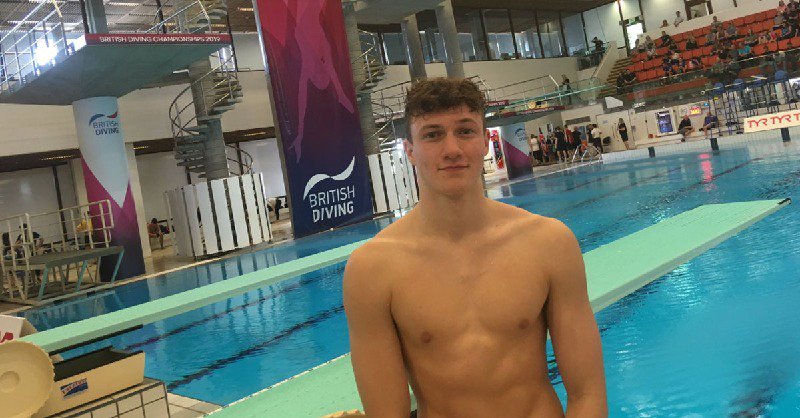 The final of day of the British Diving Championships 2019 served up a duo of debut senior domestic titles for Noah Williams and Scarlett Mew Jensen at Edinburgh’s Royal Commonwealth Pool. Current photo via British Swimming

The final of day of the British Diving Championships 2019 served up a duo of debut senior domestic titles for Noah Williams and Scarlett Mew Jensen at Edinburgh’s Royal Commonwealth Pool.

Dive London’s Noah Williams scored a resounding victory as he took gold in the Men’s 10m Platform, the platform specialist looking cool, calm and collected in the prelims to head into the six rounds of title deciding action as the top ranked diver.

At the 2018 British Championships Williams took bronze but managed to upgrade that medal today with a huge personal best of 509.65 points. His final point’s total was substantially boosted by his fifth round dive, a Forward 4 ½ Somersaults 2 ½ Twists Tuck (109C) that almost reached the magic marker of 100, 98.05 points to be exact on this occasion.

Fresh off the platform, Williams said:

“My last PB was set when I was sixteen, just over two and a half years ago; since then I’ve learnt a lot of new dives so my scoring hasn’t always been that great. But I’ve finally started to consolidate those dives and it’s finally paid off today with a massive PB and the first time over 500 points.

“It’s really good to dive against all the other boys, they’re really supportive so yeah it’s makes competition fun. Before we came out we were in the dry dive playing table tennis with some of them and I won that too, so yeah it’s been a good day for me! This result today really gives me confidence and now I just have to wait and see what happens for the summer.”

Williams was flanked on the British Champs podium by Dive London teammate Matty Lee who scored 453.25 points and defending champion Matthew Dixon of Plymouth Diving with a score of 426.10; they leave the Scottish capital with silver and bronze respectively.

Earlier in the afternoon session, Scarlett Mew Jensen of Dive London stepped up to claim the penultimate title of the championships, the Women’s 3m Springboard, a first for her also.

A routine morning outing saw Mew Jensen comfortably book her spot in final, ranking third at the end of the prelims, but she came back even stronger to power on for the gold medal and a new personal best score of 302.00 in the final.

“It couldn’t have gone any better out there today,” said Mew Jensen. “It’s a PB by one point so I’m really pleased with that.

“I’ve not had a pike list for long so to put that in and get over 300 [points], I’m really chuffed with that, I’m so happy. It’s such an honor to dive alongside Grace [Reid] – I train with her on a daily basis but to be a able to compete against her is just great, especially with Inge Jansen [Dutch international] as well – it’s just an amazing result for me.

“I honestly didn’t go into that thinking I would win it, so yeah it’s a slightly crazy feeling and a really good way to finish up the weekend in Edinburgh.”

The London-based diver shared the podium with Jansen of the Netherlands, who claimed guest silver with a score of 301.95. Mew Jensen’s teammate and hometown hero Grace Reid took the British silver, her point’s total 288.10. Kat Torrance, City of Leeds Diving, had to settle for bronze, her score after five rounds of diving 282.15 points.