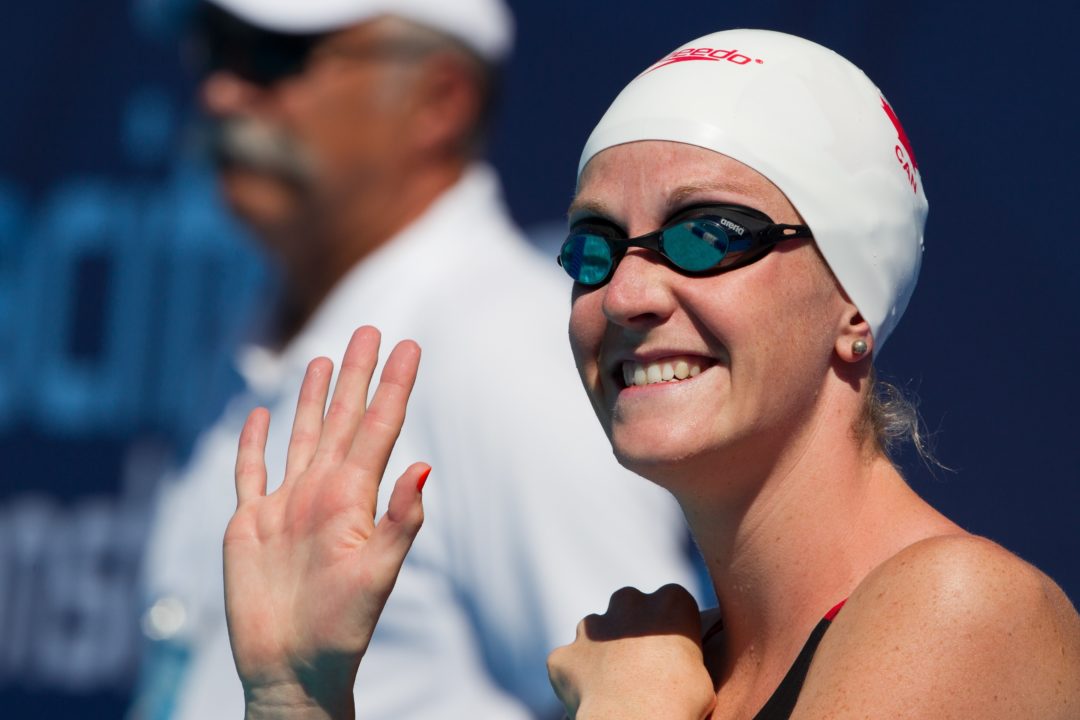 The highlight of the evening at the UBC Aquatic Centre was the ceremony celebrating the career of Annamay Pierse who...

The highlight of the evening at the UBC Aquatic Centre was the ceremony celebrating the career of Annamay Pierse who recently retired from competition. Pierse, who swam as an age grouper for the Edmonton Keyano Swim Club, reached the height of career swimming for the UBC Dolphins. Under the guidance of breaststroke guru Jozsef Nagy, she finished sixth in the 200 breaststroke in Beijing and went on to set the world record in the same event at the 2009 World Championships.

Pierse gives Nagy credit for helping develop the belief in herself needed to become an elite swimmer on the international stage, “I went from being this athlete, this swimmer that nobody thought was ever going to do anything,” she said. “Joe just had so much belief in me.”

The final few years of Pierse’s career went anything but smoothly.

While attending the 2010 Commonwealth Games in Delphi, Pierse contracted a severe case of Dengue fever. She was unable to train properly for months, then missed qualifying for the London Olympics at the 2012 Canadian Olympic Trails in Montreal.

That bitter defeat was a test of Pierse’s courage.

“That was just devastating and heartbreaking, everything all rolled into one,” she said. “I made it out the other side of that.

“I think that’s the biggest thing swimming has given me. I know life at times, it’s not easy, but there’s not going to be anything that’s going to fully throw me down and I won’t be able to get back up.”

Once Pierse’s retirement ceremony concluded it was time for the first night of the 2013 Mel Zajac Jr. International to begin.

In a city where every sport plays second fiddle to hockey and swimming is not exactly at the forefront of most people’s minds, it was interesting to see how everyone around town seemed to know that Ryan Lochte had arrived in Vancouver.

Lochte won his first event of the evening, the 200 backstroke with ease, which might be an understatement. At the 100 meter mark Lochte was three seconds ahead of the field turning in a time of 58.24 and finished nearly seven seconds ahead of his next competitor posting a time of 1:59.56, just missing the meet record of 1:59.34 set by Mitch Larkin last year.

In the 200 freestyle Lochte did get a challenge from Jeremy Bagshaw of Island Swimming who turned first at the 100 meter mark in a time of 54.09 28 one-hundredths of a second ahead of Lochte, but that was short lived as Lochte had a strong second half winning the event in a time of 1:50.15.

Bagshaw finished second posting a time of 1:51.34 with Hassaan Abdel-Khalik placing third in a time of 1:52.56.

There were two meet records set during the evening; the first being in the men’s 50 butterfly where UBCD’s Kelly Aspinall won the event in a time of 24.47, which broke Joe Bartoch‘s meet record of 24.49 set in 2009.

Club Wolverine’s Emily Brunemann broke the second meet record of the evening in the 1500 freestyle, winning the event in a time of 16:27.99, breaking the meet record of 16:31.69 set by Savannah King last year.

King finished second posting a time of 16:56.14 while 14 year old Sophia Saroukian, who is representing Team Alberta, finished third, just missing the Alberta provincial record in the event recording a time of 17:05.89.

The women’s 50 butterfly was an extremely tight race between UBCD’s Noemie Thomas and Florida’s Ellese Zalewski and Natalie Hinds. Zalewski got her hands on the wall first winning the event in a time of 27.00 with Thomas finishing second in a time of 27.06 followed by Hinds who posted a 27.08.

The women’s 400 IM was an exciting race between 15 year old Emily Overholt of the West Vancouver Otters and Tianna Rissling of the University of Calgary. Overholt had a four second lead over the field after the butterfly and a seven second lead over Rissling after the backstroke. In the breaststroke Rissling split 1:18.71 to take an eight one-hundredths of second lead over Overholt, who than regained the lead in the freestyle winning the event in a time of 4:49.03.

Rissling finished second in a time of 4:49.34 followed by Hannah Burns of the Gators Swim Club who recorded a time of 4:50.85.

The women’s 100 breaststroke was a battle between the top three finishers at the Canadian Interuniversity Championships, Fiona Doyle, Tianna Rissling and Tera Van Beilen. UBCD’s Van Beilen held a slight lead over Doyle for the entire race, turning seven one-hundredths of a second ahead at the 50 and ultimately winning the event in

Rissling, Doyle’s University of Calgary teammate finished third in a time of 1:10.51.

Sinead Russell took the women’s 200 backstroke easily in a time of 2:10.13. Genevieve Cantin finished second posting a time of 2:12.95 followed by UBCD’s Lauren Lavigna who recorded a time of 2:13.88.

UBCD’s Heather MacLean won the 200 freestyle finishing in a time of 2:01.52 followed by teammate Savannah King who posted a 2:02.41. Breanna Hendriks of the University of Calgary finished third in a time of 2:02.91.