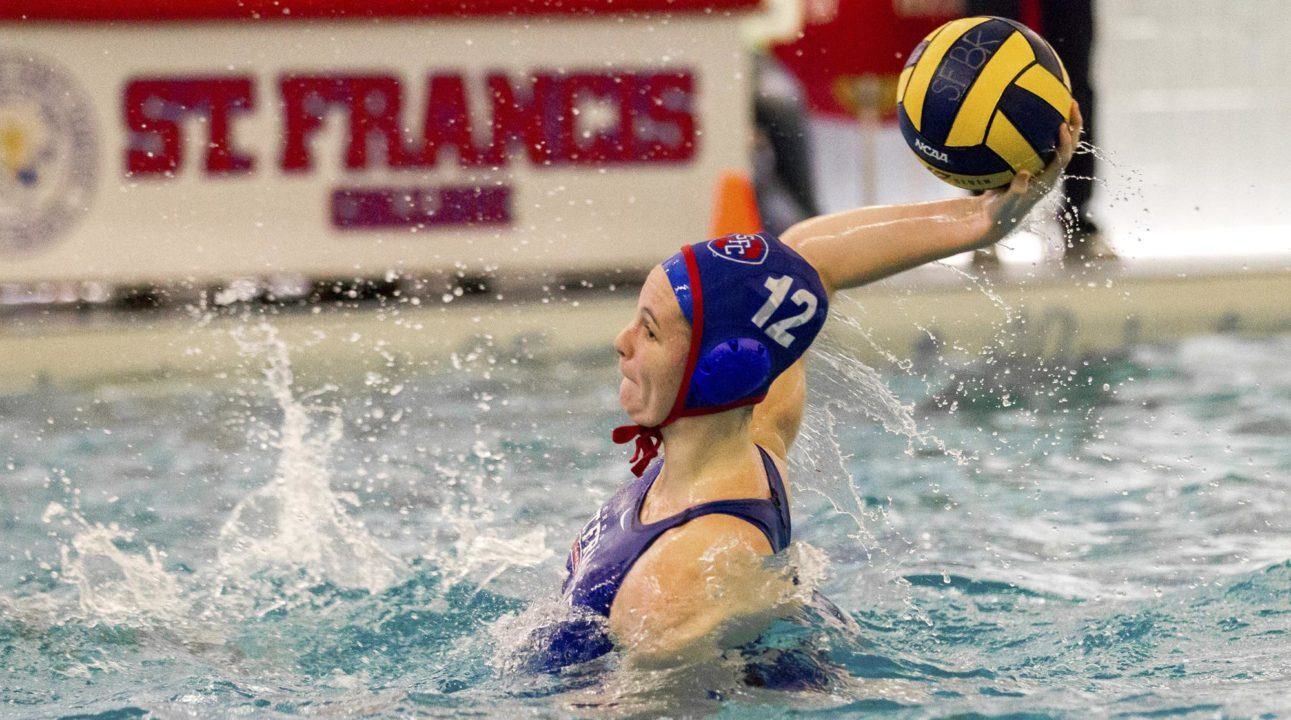 Week 3 of the NCAA women’s water polo season brought a scoring onslaught, including an eight goal effort by Stanford’s Makenzie Fischer in the Cardinal’s win over #8 Michigan, six more scores in an MPSF conference win over #19 Indiana and a four bagger in a 17-10 victory over #4 Cal.

Other players that lit up the scoreboard included Fischer’s teammates Aria Fischer, who chipped in four scores against the Wolverines, and Madison Berggren and Lauren Indart, who each added a hat trick against the Hoosiers. Stanford’s win over Cal saw Makenzie Fischer, Kat Klass and Sarah Klass put in four goals and Aria Fischer drop in three scores.

#10 UC Santa Barbara benefited from four-goal efforts by Katie Pipkin and Kelly Murphy in the team’s 12-6 win over #24 Cal Baptist. Freshman Amanda Legaspi put in the game winner to lift the Gauchos to an 11-10 win over #7 Arizona State to finish off the first of her two hat tricks on the day. She also notched a trio of scores in the opening 16 minutes against Iona to finish out the weekend.

#13 UC Davis pulled off a 12-11 upset win over #8 Michigan as Kathleen Schafle scored four times, including two fourth-period goals to seal the victory. Chloe Robinson and Noelle Wijnbelt each had hat tricks for the Aggies. Wijnbelt added two more hat tricks on Sunday as UC Davis fell to #8 Pacific (10-8) and topped #19 Indiana (13-10).

Player of the Week: Noelle Wijnbelt, UC Davis
Recorded eight goals, an assist and two steals in the three games as the Aggies went 2-1. She has started her collegiate career with a team-leading 19 goals in eight contests; helped fuel a 12-11 upset of No. 8 Michigan in the tourney opener with a hat trick and followed up with another three goal performance in a 10-8 loss to No. 8t Pacific; added two goals and two steals in a 13-10 victory over No. 19 Indiana

notched 25 saves through her first four games; posted nine saves in a win over No. 20 Marist, and also posted a career-best 13 saves in a close loss to No. 16 Wagner.

named CWPA Rookie of the Week for the second time this season after recording five goals, six assists, two drawn exclusions, one steal and five sprints won at the Stanford Invitational. Andrews led Michigan to an 11-9 victory over No. 8 Pacific in the final game of the weekend with four goals and two assists. She had one goal and three assists in a loss to No. 13 UC Davis

Pacific’s Viktoria Szmodics led the Tigers with a team-high seven goals and five assists during their three-match slate at the Stanford Invite this past weekend to earn GCC Player of the Week honors for Feb. 6. She had three goals against No. 4 Cal, two against No. 8 Michigan and then scored two goals with four assists in the win over No. 13 UC Davis.

The reigning MAAC Rookie of the Year began her season with a bang as she totaled 16 goals and eight steals of the course of a three-game week for the Terriers. She began the week by scoring four goals against California Lutheran, later that day she rattled the cage five times and swiped three steals against Brown. On Sunday, in a 12-6 win over SFPA, the sophomore scored seven goals and recorded five steals.

Campbell tallied 23 saves over four games. Posted a .536 save percentage over those four games. The sophomore made 19 stops versus Harvard and seven stops against Saint Francis U in a win.

Stanford junior Makenzie Fischer (Laguna Beach, CA/Laguna Beach HS) poured in 18 goals (6.00 GPG) over three victories last weekend over No. 8 Michigan (21-9), No. 19 Indiana (25-4) and No. 4 California (17-10). She delivered a career-high eight goals in the rout of the Wolverines, just one off the MPSF single-game record and the most for a Cardinal since 2009. Fischer followed up with six scores in the conference opener against Indiana, her third-straight game with at least that many. She closed the weekend with a four-goal outing against Cal. This is the seventh career MPSF weekly award for Fischer, including a repeat from last week.

Stanford freshman Chloe Harbilas (Newport Beach, CA/Corona Del Mar HS) led the Cardinal defensive effort at two-meters in the wins over No. 8 Michigan (21-9), No. 19 Indiana (25-4) and No. 4 Cal (17-10), subbing in for defense in 5-on-6 situations. In her three quarters against Indiana, the Hoosiers were held to 2-of-6 on the power play (33 percent). Harbilas added two goals in the conference win. She was even better against Cal, as the Golden Bears were limited to just three goals on 12 power play opportunities (25 percent). In the first game of the weekend, Michigan was just 3-of-11 in man-up situations (27 percent). This is the first career MPSF honor for Harbilas.

Auriel Bill, Cal State East Bay
Reigning Division II Player of the Year Auriel Bill has been named WWPA Player of the Week after leading the Pioneers to their second straight win to start the year. Bill scored a goal in all four quarters, added four assists and drew a pair of exclusions in a 12-11 win. She was also named CSUEB’s Student-Athlete of the Week for Jan. 28 – Feb. 3