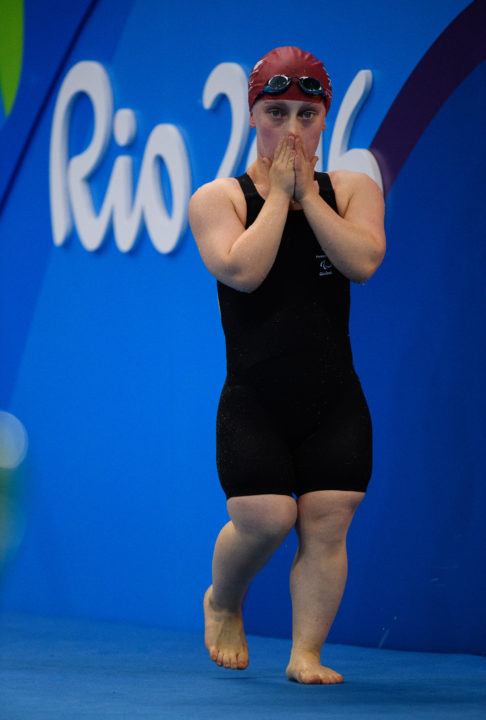 Ellie Robinson, of Northampton, England made her debut at the Rio 2016 Paralympics representing Great Britain. At 13, Robinson set... Current photo via Bob Martin of OIS/IOC

Ellie Robinson, of Northampton, England made her debut at the Rio 2016 Paralympics representing Great Britain.

In 2012, Robinson was diagnosed with Perthes hip disease which requires her to undergo daily physiotherapy. She stopped training, but returned to the pool in 2014.Robinson wasn’t expecting to qualify for Rio, but was training mainly for Tokyo 2020.

In Rio, Robinson took the gold in the 50-meter butterfly, setting a new Paralympics record time of 35.58.  Also taking the bronze in the 100-meter freestyle.

At the 2016 IPC Swimming European Championships, she won three bronze and one silver in her four out of five events. It was a quick year with Rio and European’s. Robinson returned home to Britain as one of the most successful swimmers.

In 2016, Robinson was announced that she had won the BBC Young Sports Personality of the Year. With 2016 behind her, Robinson is staying focused on her “mini goals” to get where she wants. Her plan is to do the best she can this year and not put too much pressure on herself.

“It’s not about best times or medals, it’s about doing the best you can” said Robinson.

So far in the new year, Robinson was recognized in the 2017 New Years Honours List receiving an MBE for services to swimming.