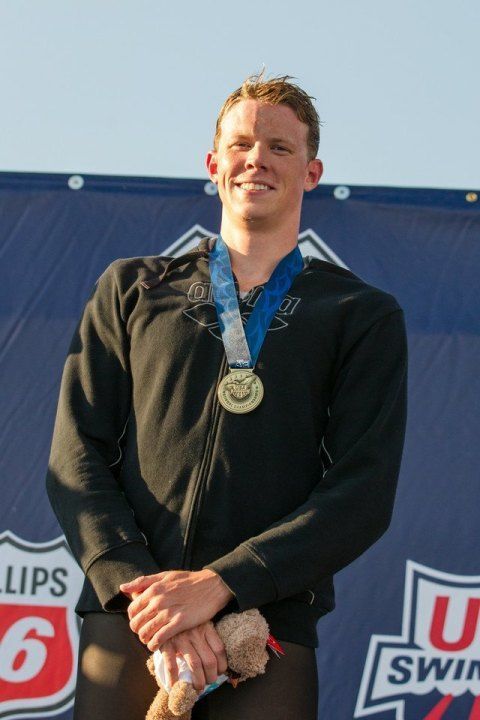 Having battled a shoulder injury for almost more than a year, 2012 Olympian Matt McLean has opted out of vying for a spot on the U.S roster for Rio. Archive photo via courtesy of Arena

While some swimmers are taking on potentially monster schedules at the 2016 U.S. Olympic Trials, one swimmer has decided to take on zero events and scratch the meet entirely.

Former U.S. National Team Member and University of Virginia swimmer Matt McLean is absent from the psych sheets and will not be vying for a spot on the Olympic roster for Rio.

The 2012 Olympic gold medalist in the men’s 800 freestyle relay suffered a shoulder injury just over a year ago, an injury which resulted in McLean removing himself from the 2015 FINA World Championships line-up. Doctors found McLean had torn the labrum of his left shoulder, a product of the swimmer admittedly having ignored the pain and continuing to push through heavy training for a number of years.

Although the last time McLean competed at an elite meet was at the Arena Pro Swim Series in Austin in January of 2015, he remains as the 10th-fastest U.S. performer of all time in the 200m freestyle event. Fans were hopeful he’d come back to form by the time Omaha rolled around and tap into that same McLean magic to score a potential spot on the men’s 800 freestyle relay this year.

In an interview with USA Swimming last March, McLean commented that “I’m not quite back to 100 percent, but my injury has made me find new and different ways to train, think and plan. The shoulder feels much better than it did 13 months ago, but I still have some limitations. Right now, I’m working toward these limitations not keeping me out of Trials.”

He also said that he was ‘taking it one day at a time’ approaching Trials, stating that “I should be in order to compete at the level I expect from myself and, if I’m not there, I’ll have to decide what I’m going to do next.”

McLean’s absence from the psych sheets points to the swimmer’s shoulder not having recovered to where he felt strong enough to compete against America’s best swimmers.

Congrats to Matt on a wonderful career. He overcame more than his share of adversity over the years to become an Olympian and much more. He’s a great swimmer, but an even better teammate and person. Best of luck to you Matt in the new phase of life and thanks for the memories!

“Having battled a shoulder injury for almost more than a year”. ??–>
Less than a year?

There isn’t anything Matt McLean didn’t do.

5 out of 6 right ain’t bad, but let’s be honest the only thing UVA won as a team while Matt was there was arguably the worst ‘Power 5’ conference at the time.

Matt is on to bigger and better things. I wish him nothing but the best in his pursuit of his dream and his service to our country!

Couldn’t be more excited for Matt… he’s one of the few that have taken their success in the pool and used it for good beyond their own sport. I think a few people at this Olympic Trials should take note.