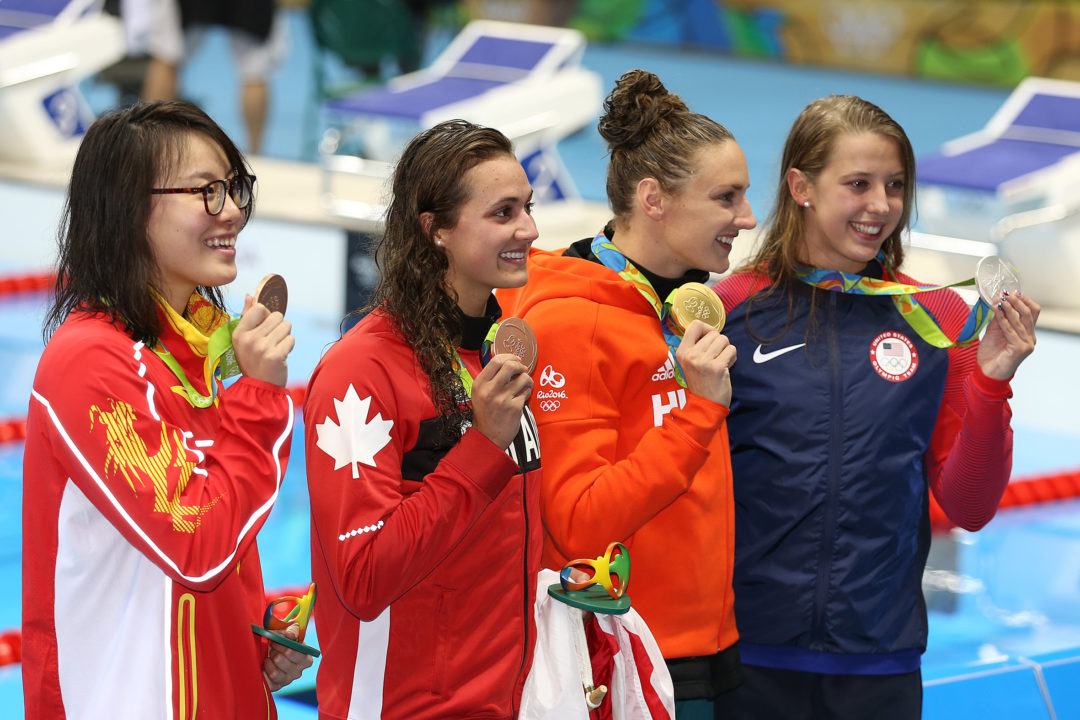 Kylie Masse broke her own 100 back national record in the 400 medley relay prelims this morning, leading off the Canadian women who also combined to break the national record. Current photo via Simone Castrovillari

Leading off, 100 back bronze medalist Kylie Masse broke her own Canadian record set in her bronze medal winning swim of 58.76 by a tenth in 58.66, giving the Canadians a sizeable lead in the first of two prelim heats.

Three more solid legs from Rachel Nicol, Noemie Thomas and Taylor Ruck gave the Canadians the win in heat 1, and also broke the Canadian record in the relay by over a second in 3:56.80.

They broke the previous record of 3:57.87 set back in 2009 at the World Championship during the infamous tech suit era.

That gives them Canadian records in eight different events here in Rio, including all three female relays.

Here’s a comparison of the splits between the two relays:

After the dust had settled in the second heat, the Canadians held the 2nd fastest time behind only the Americans who went 3:54.67. They are followed closely by Denmark, Australia, Russia and China, but will be making a few lineup changes for tomorrow’s final.

The Canadians are expected to move 100m silver medalist Penny Oleksiak onto the butterfly leg, while putting Chantal van Landeghem on the freestyle. Oleksiak will gain over a second off of what Thomas did here, while van Landeghem’s 52.90 relay split from the 400 free relay will give them at least another half a second off of Ruck’s split.

The Americans are the only team who will likely make more moves than Canada, as they’ll exchange all four of their legs. They are the huge favorites for gold, but behind them the Canadians are right in the thick of things for a medal.