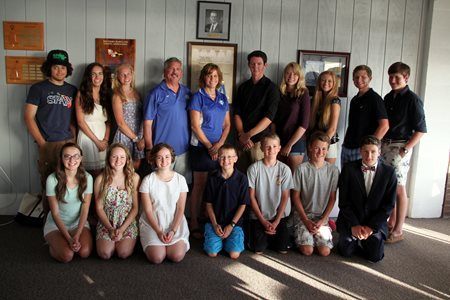 Mike Clark knew it would be cold when he jumped into the 40-degree water at Tall Timbers Marina in St.... Current photo via marymount university

Mike Clark knew it would be cold when he jumped into the 40-degree water at Tall Timbers Marina in St. Mary’s County, Maryland. But the longtime Marymount University varsity swim coach didn’t hesitate. A woman’s life was on the line, and the last the thing he cared about was his own discomfort.

“My adrenaline was going, so the cold didn’t shock me too much,” he said, “and fortunately the water was only about chest deep.”

Clark, who has more than 30 years of experience as a lifeguard, had never dealt with anything quite like this. Moments earlier he had heard a “plunk and splash in the water” as he was getting something from his truck on that chilly Friday evening in early April. He figured Valarie Dieudonne, whom Clark had seen walking toward a friend’s boat as he pulled into the parking lot, had dropped something in the water as she got on board.

When he checked on her, things were a lot more serious: He saw what looked like a garbage bag fluttering beneath the waves and realized it was her clothing. That’s when his training kicked in.

“Once in the water, I turned her face up but she wasn’t breathing, so I gave her some rescue breaths,” he recalled. “Then I yelled for help.”

Fearing Dieudonne had a neck injury from hitting her head in a fall, Clark didn’t want to pull her to the dock and so he continued to alternate between giving her rescue breaths and shouting for help.

Luckily, his wife, Theresa, who was inside the Clark’s boat, heard him and called 911. Then she ran over to the nearby Sailing Center of Chesapeake. Once the Center’s students and instructors realized what was going on, they sprang into action.

“A couple of the kids in dry suits ran over and jumped into the water with me and helped hold her as I continued giving her rescue breaths,” said Clark. “Soon her eyes started fluttering and moving in the right direction.”

The school had an emergency plan, and the students executed it. They brought over a backboard and first aid kit. A few got into the water to help Clark get Dieudonne on the board, then the deck of a boat. Other students went out to the road to meet the ambulance and fire department.

To show their gratitude for the school’s efforts, the Clarks, who live in Manassas, made a donation to the Sailing Center to provide CPR training to the students. Mike Clark was honored this past weekend at the Sailing Center’s annual banquet for his efforts.

Mike Danko, executive director of the Sailing Center, said the dozen or so students involved were all in high school, ranging in age from 14 to 18.

“They were fantastic and did exactly what we taught them to do,” he said, “but Mike Clark was the real hero. We just happened to be getting off the water early and were able to help.”

Dieudonne has no recollection of the event.

“The first thing I remember is waking up at MedStar Washington Hospital Center four days later,” she said. “I ended up staying there three more days.”

She had never met Clark before the accident.

“If it hadn’t been for him, I wouldn’t be here now,” she said. “Words can’t even begin to describe how grateful I am.”

Clark, who has been the head swimming coach for men and women at Marymount since 1991, said the whole thing reflects the butterfly effect, in which one small change can drastically affect a larger outcome. For example, if his regular parking spot at the marina hadn’t been taken, Clark wouldn’t have been close enough to hear Dieudonne fall in the water. Or if the wind hadn’t died down that day, the Sailing Center students wouldn’t have come off the water early.

“This experience was a real wake-up call,” Dieudonne said. “You realize how precious life is. One split second can change everything.”

Great story- Bravo to all involved!