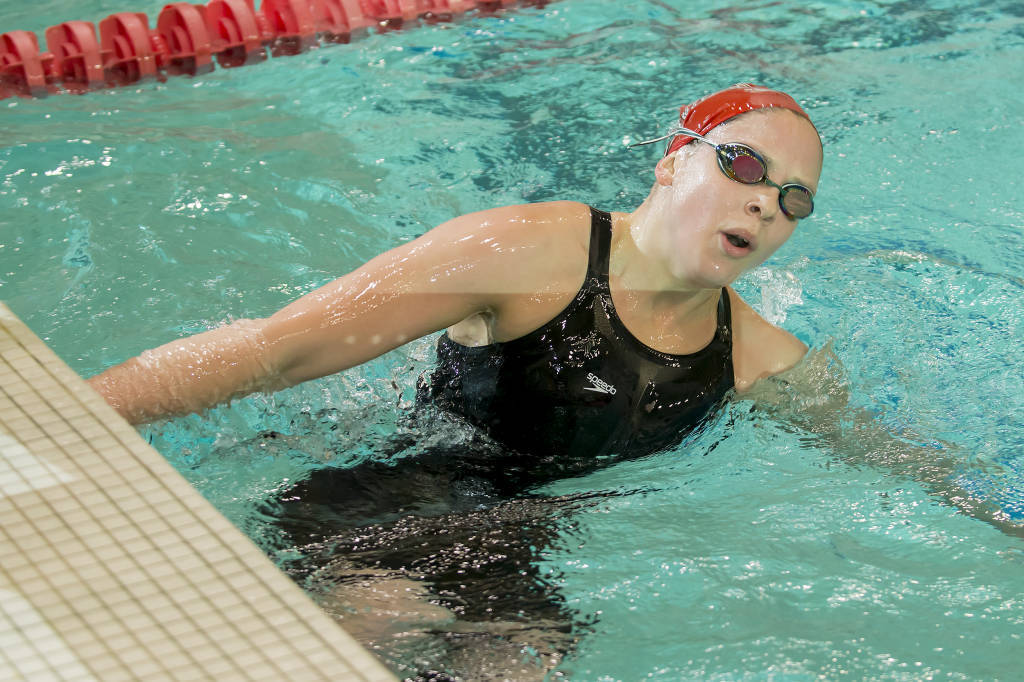 A senior team captain and MVP at St. Joseph’s Hill Academy, de Freitas has been awarded Staten Island Advance All-Star Athlete recognition all four years of high school. She won a Girls Catholic High School Athletic Association city championship in 2017 and holds her high school’s record in the 100-yard butterfly. De Freitas is also a record holder on the school’s 200-yard medley and freestyle relay squads. She received the Wagner Aquatic Club Coach’s Award in 2016 and was named Metro Top 10.

Dickinson was chosen as captain and MVP of her high school team. An All-Conference selection, she also performed well academically as an Honor Roll student. She was a sportsmanship representative at East Catholic and earned the school’s Probability and Statistics academic award.

Throughout her high school career Farrell has swam top times at the division, county and state levels. She was a division champion in the 200-yard individual medley and an All-County honoree in the 200-yard freestyle. She qualified for the New York State Championships in both of those events as well as the 100-yard butterfly. Farrell swam a leg on a relay team that won a state title and qualified for Speedo sectionals. Academically, she was a member of the National Honor Society and enrolled in AP and IB courses. She was also on the Honor Roll and served as a team captain.

Gervasio played four sports in high school and has spent the last two years diving for Flip N Rip. She also has competed in crew, track and field, and gymnastics. She will battle for a top spot at AAU diving nationals this summer. Academically, Gervasio was a member of the National Honor Society and received Niskayuna’s Math and Latin American achievement awards.

Hartmann won a District One Championship for North Penn High School for four straight years and was elected a team captain. With her help, North Penn was state champions in 2016 and a runner up at the PIAA state meet in 2017. Individually, Hartmann was named Suburban One All-League First Team in the 500-yard freestyle and honorary mention in the 200-yard event. At the end of her high school career she was the recipient of the Senior Achievement Award, which recognizes the male and female seniors who have shown the greatest improvement.

Breaking two of her own team records, Hartmann finished fifth in the 1,650-yard freestyle and eighth in the 1,000-yard event at the MA senior championships while representing U.S. Swimming.

A transfer from Binghamton University, Nowak also had a decorated high school career at Secaucus. She earned either All-Conference or All-County honors in 29 events in four years in New Jersey, including an All-County selection in the 100-yard backstroke. She holds four NJIC Championship meet records and won the conference’s sportsmanship award.

Nowak earned national recognition when she picked up the United States Army Reserve Scholar-Athlete Award in high school. She was president of the National Honor Society and a member of four other honor societies: Mu Alpha Theta, American Technology, Foreign Language, and English. She earned the President’s Award for Educational Excellence.

Reeves was an All-State selection in 2016-17 and named All-County her other three years of high school. A four-time team MVP, she also excelled in the classroom at Lindenhurst earning a spot on the Principal’s List all four years.

Spillane broke four school records in high school with her individual performance in the 500-yard freestyle and as a member of 200-yard medley and 200- and 400-yard freestyle relay squads. She was a Sectional/YMCA Nationals qualifier in the 200-yard butterfly. Spillane was a Boston Globe All-Star and Patriot Ledger All-Scholastic Team member. She was a member of the Spanish Honor Society.

Zimmerman was a four-time All-County swimmer and state finalist. She earned All-State recognition for two years and broke her school’s record in the 100-yard breaststroke. She competed in the same event at the 2017 New York State finals and clocked in at an AAC time. Zimmerman qualified for NCSA Junior Nationals in the 100-yard breaststroke this past year and swam legs for AAC relay teams in 2016 and 2017. In the classroom she was a six-time Honor Roll student.

The Marist women won their eighth straight and the Red Foxes’ swimming and diving program’s 30th combined MAAC title during the 2016-17 season. Marist will begin the 2017-18 campaign looking to extend a streak of 40 consecutive regular season conference dual meet victories.