Mann takes us for a ride – what was that 10k like? 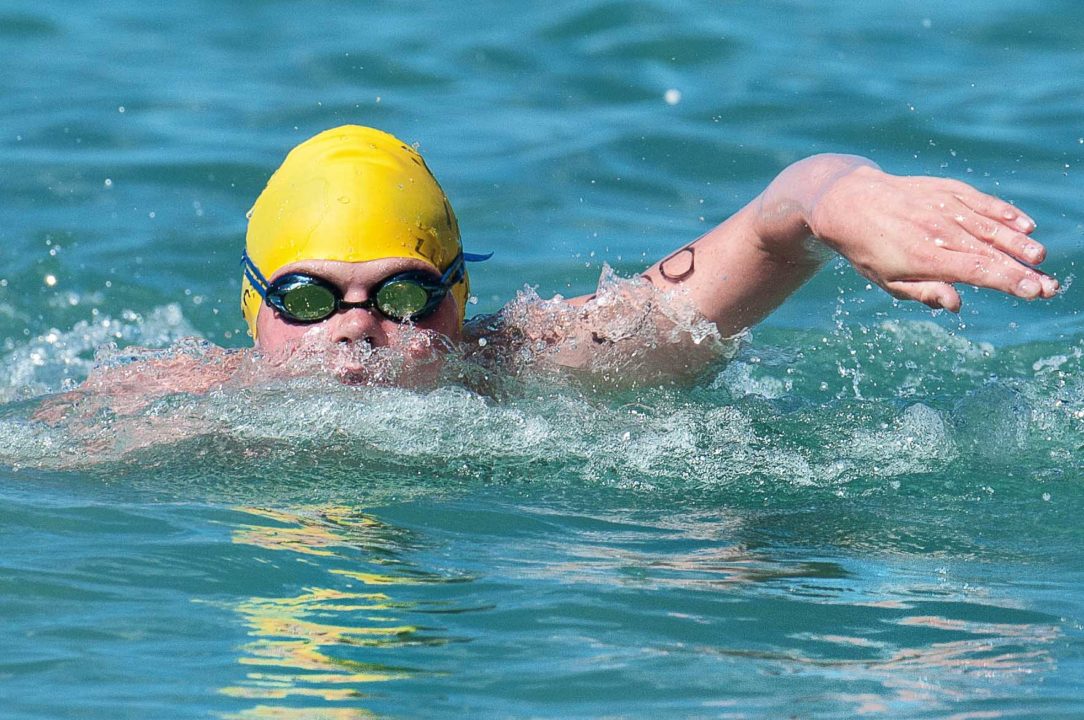 She's only 15 but she's becoming very wise in her open water swimming. Becca Mann shares some of the backstory from today's women's 10K swim at the word championships.

Here’s some inside scoop from Becca Mann – she gives a great description of what it was like for her during today’s race.  As you’ll read, there’s a lot more going on during an open water swim than most folks realize.

I was the first to enter the water.  Only problem was I entered the wrong way.  And the blow-horn still hadn’t gone off.

That’s right; I fell into the water.  Thankfully, the horn sounded right as I fell, so I didn’t get disqualified.  I entered the water feet-first rather than head first, so I was immediately at a disadvantage in the Women’s 10k today.

It was an exciting race.  A lot of things happened to Team USA that  had never happened before.  I hit someone back for the first time.  Coach Catherine Vogt fed two swimmers in the same race for the first time and had to “feed” me some goggles, which she had never had to do before. Christine (Jennings) went from fifth or sixth place to about thirty-fifth because she stopped to yell at someone who had attacked her at a feeding dock.  It’s always fun to try new things.

I spent the whole first loop bravely fighting my way up.  The pack consisted of about fifty people and after my wonderful cannonball, I was near the back.  I experimented by moving around in the pack.  I always tried to stay away from the middle (where the worst of the fighting usually is).  In the first loop, I stayed to the outside of the buoys to avoid contact, but I quickly learned that it’s impossible to avoid contact when you have fifty girls clumped together, all determined to reach the touchpad.  After that, I tried to always stay on the inside.

Once we reached the 5k, I was in a much better position.  I knew this because I could see Christine and I knew that if I was with her, I was in a good spot.  This speculation proved to be correct.  We were both in the hunt for gold.

I was feeling very confident going around the buoy that ended the third loop and started the fourth.  That was one of the more physical turns and shortly after I lost my goggles.  I’m not exactly sure what happened.  One second they were there, the next they were gone.  I only had a slight warning when my left eye came off.  I was thinking about fixing it when it came off altogether.  I was about three hundred meters from the feeding dock where I knew Catherine had an extra pair of goggles.  My goggles have never fallen off during a race, so I was kind of excited to see how I would deal with the predicament.  The only thing I was upset about was the fact that I had to go to the feeding dock.  I knew that no one would be stopping and it would take a lot of energy to recover from going off course.  I considered finishing the race without goggles, but I knew that wasn’t the best idea.  So I went to the dock.

Catherine had the goggles waiting for me and it took me one or two precious seconds to put them on.  Luckily, there was one other girl who stopped to feed and she pulled me back to the group.  I had to work to get back into a good position, but the goggles were worth it.

I was back with Christine at the final stretch.  We worked together, gliding towards the leaders, passing several people on our left.  We were still gaining speed when we crossed the finish line.  We were both happy with our performances (I was eighth and Christine was tenth) and I know Christine is going to rock the 25k.

I had so much fun representing my country this week!  I’ve learned so much about the mysterious sport of open water during my races and the training camp.  This has been such an awesome trip and I can’t wait to watch the 5k pursuit and the 25k!

Water roller derby! If the networks could figure out how to hook up helmet(swim cap) cams and could get some decent video, I think you could get a pretty solid audience and fan base for open water swimming. It is a lot more interesting to watch than pool races.

I wouldn’t compare pool swimming and open water swimming in that way. They are very different and both are interesting in their own way. However, I agree with you about the fact that open water race can be very thrilling as it includes a factor of tactics in swimming.

Men’s 10k was a good example. As Thomas Lurz highlighted Mellouli swims 100m free 5 seconds faster than he does. Pure open water swimmers must keep up the pace in order to kill Mellouli’s sprint at the end. On the other hand, it’s consuming to lead a group so who’s willing to take the task of maintaining speed? Someone must do it as otherwise Mellouli wins. 🙂

Why did Coach Vogt need to feed 2 people at once? What happened? Where was Christine’s coach or the USA Swim OW guy?

Awesome swim and fantastic attitude, Becca! Great to hear how much fun you’re having with the adventure of open water swimming. Keep the posts coming!

It’s not as bad as water polo, but has its fair share of bumping around.

0
0
Reply
B
Reply to  beachmouse

As a former water polo player and current open water swimmer, I can confirm. If the pack stays tight in the home stretch things can get a bit dicey between competitors jockeying for position. It’s remarkably similar to how runners maneuver during the 5 and 10K at the Olympics if you want a visual. People aren’t afraid to accelerate into the tiniest gap to cut you off if they see an advantage. I’ve taken more than a few feet to the goggles this way.

Becca, I absolutely LOVE your enthusiasm as well as your cool headed approach. You are only 15-years-old and ALREADY swimming in the world championships! Your future is so bright I am unbelievably happy for you. Way to go!

Seconded! And she’s a very good writer, as well.

“I hit someone back for the first time.”

Awesome… Would love to see video of the open water stuff… Bobo?