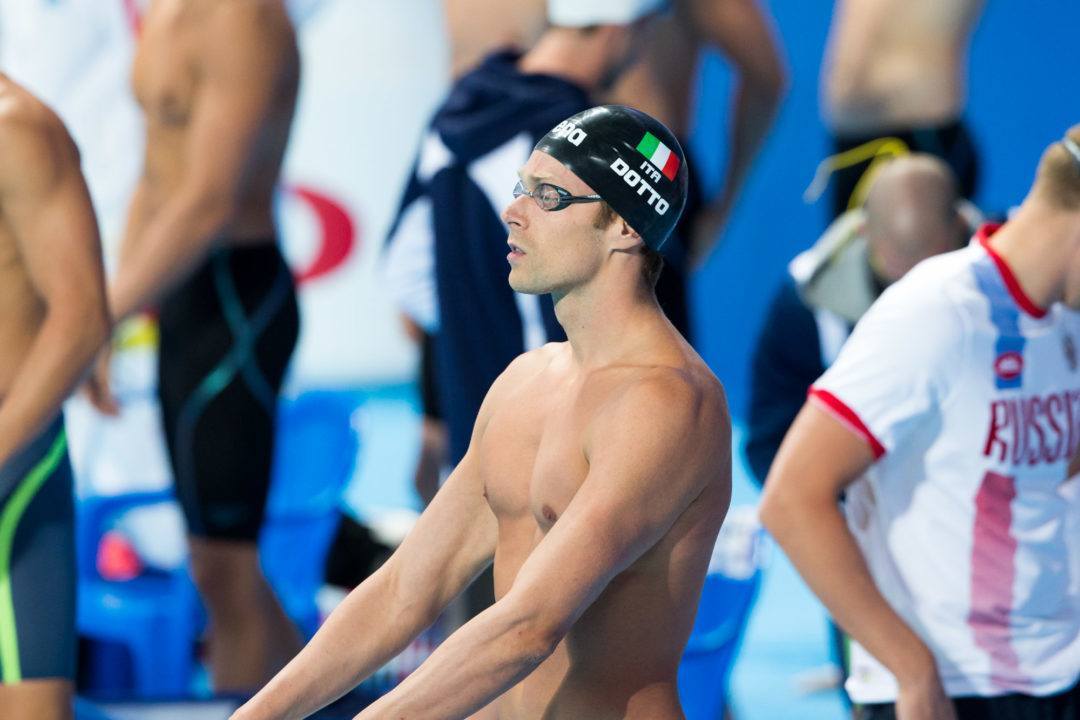 Italy's Luca Dotto clocked a 47.96 to lead off Forestry's 4x100 free relay on the third night of 2016 Italian Nationals and Olympic Trials, breaking the national record and leapfrogging to the Number 2 ranking in the World. Archive photo via Tim Binning/TheSwimPictures.com

Two days after winning the men’s 100 free on Day One of the 2016 Italian Assoluti National Championships and Olympic Trials with 48.40 (you can read our coverage here), Luca Dotto of Forestry became the first Italian man in history to break through the 48-second barrier leading off Forestry’s 400 free relay in 47.96.

There’s something about the leadoff of the men’s 400 free relay that brings out the best of Dotto. He did it last year as well when he led off Forestry’s 4×100 free relay in 48.40, which was .10 faster than Marco Orsi’s winning time in the individual event two days prior. This year Dotto’s repeat performance broke the Italian national record and vaulted him to Number 2 in the world for the season.

Dotto has improved both halves of his race over the last 12 months. His up-front speed is especially notable; since last year Dotto has taken .34 off the first leg of the 100.

Dotto was already qualified for this summer’s Olympic Games in this event, but at .44 faster than his original qualifying time, he now looks like he could be among the finalists in Rio. At a minimum, he’ll need to slice another half second off his time to make the podium. Still, Dotto’s time would have put him on the third step of the podium at World Championships in Kazan last summer, and would have been 7th in the 100 free final at the 2012 Olympics in London.

ThomasLurzFan, you are agressive. Not very nice. I was just kidding and just tried to lighten the mood. You can of course discuss about everything you want here. I didn’t know I had prevented you from doing it.
Then I predict the American roster for Rio maybe for one year but I update it very regularly. And I don’t see what is not reasonable. 🙂 I pick 2 names per event plus a few others for the relays. My predictions don’t have to be reasonable. I don’t predict times or medals. I try to predict the American roster. Just for fun.

Ervinforthewin, your name before that one was Jean-Michel on swimswam. Not a Chinese first name! And you know… Read more »

Brazil is not in this one.

Individual 100 free.
If McEvoy is McEvoy then he wins gold and breaks the 47 sec barrier
Silver ning zetao
Bronze no idea

I don’t know how the night finals will affect the swimmers though.

Funny to read the Germany vs Belgium contentious debate above about Adrian and the men’s 100 free final. 🙂

A Frenchman is gonna try to put an end to your discussion.

The crystal ball says nothing for the moment.

Stop. I see something. Yes.

We might have a race where all 8 could be from different countries and it would not surprise me.

I think the Aussies with Cam Mac and Chalmers….could supply 2 in the final

All I can say, as an Aussie, is I hope you’re correct! It’s been nearly 50 years since we won it. A few silver but no gold.

Sorry, but what exactly does our nationality have to do with it? None of us claimed that a belgian or a german will reach the final (although belgium actually might have a chance), so why are you bringing it up here? Please give your own opinion (if you have one), but dont tell us how or about what we are allowed to discuss here. Its funny that you say the “crystal ball thing”, considering that you predicted the american roster for Rio about one year ago … I think our predictions are much reasonable than your predictions back then.

Your sarcasm is not surprising , since u believe your barometer is correct . Wait end of june , u won’t put and of to this discussion any soon . I am not belgian by the way , sorry . Wrong assumption from your part . If there is a french in the final , u are lucky .

G3, so with your rule Natalie Coughlin has never swum her crazy 59.58 in 2002 in the 100 back. First woman under the minute. There’s no video anywhere! 😆
Same remark about Michael Phelps’ first world record in March 2001. No video! 😆