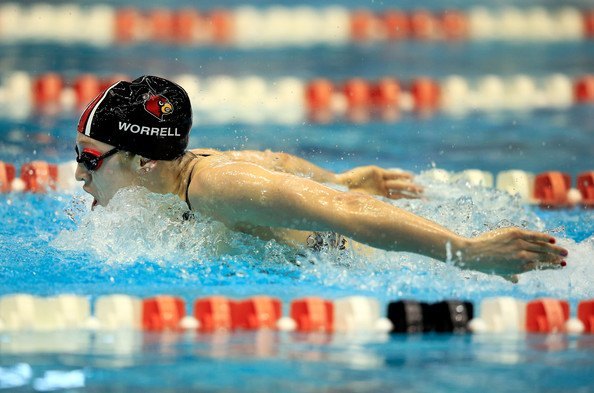 Kelsi Worrell scorched a 48.22 split in the final 400y freestyle relay event to help give the Louisville women a final push in their win over in-state rival Kentucky. Archive photo via Jamie Squire/Getty Images North America

Lexington, KY – An intense sports rivalry came to a head yesterday, as the University of Kentucky Wildcats hosted the University of Louisville Cardinals at Lancaster Aquatic Center.  The “Bluegrass Showdown” featured Louisville’s top guns Kelsi Worrell, Tanja Kylliainen and Grigory Tarasevich, while Kentucky was armed with US National Teamer Tina Bechtel and distance ace Kendall Casey, along with a strong diving contingent.

The men’s meet was fairly straightforward, with the Cardinal men winning all but two individual swimming events. The women’s meet, however, was a thrilling point battle back and forth, which ultimately ended with Louisville on top, but only by a slim margin of ten points.

Multiple wins by the usual suspects of Louisville’s 19th-ranked women’s squad was the name of the game today, as Kelsi Worrell started off strong with her contribution of a 23.20 fly split in the 200y medley relay to give the Cardinals the first win (1:40.08).

Worrell followed this up with two individual wins – first,  in her signature event, the 100 butterfly in a time of 52.04, as well as the splash and dash, where she out-touched the field by almost two seconds to win in 22.76.  Worrell already owns the fastest time in the country in the 100 butterfly event, but yesterday’s performance now gives her the 8th position in the rankings as well.

Pint-sized powerhouse, Tanja Kylliainen, contributed in a big way with her commanding 1:57.12 win the 200y butterfly, denying Kentucky’s Tina Bechtel who finished in second in a time of 1:58.00.  Bechtel was also the second place finisher in the 100y distance to Worrell, with Bechtel’s clocking a time of 54.19.

Kylliainen was one of only two swimmers under the 2-minute mark in the 200y backstroke, touching the wall for second place in 1:58.77 to Wildcat Danielle Galyer’s 1:57.20 swim.  Galyer also represented Kentucky well with her victory in the 100y backstroke with a time of 54.24.  But, Kylliainen finished strong with a second individual win in the 200y IM, simply owning the race from start to finish in a final time of 1:59.59, which was almost a full three seconds ahead of the competition.

The Kentucky women also earned major points in the diving events, where senior Christa Cabot won the women’s 3 meter event and was also part of a 1-3 sweep of the 1 meter event; these two events alone gave Kentucky 30 points in their attack on the Cardinals.

But, the Cardinals were not done in their final point push, as the foursome of Andrea Kneppers (50.59), Kelsei Worrell (48.22), Alex Sellers (51.28) and Rachel Grooms (50.65) combined to give their team the critical 11 points needed to put them over the edge and take home a well-fought win back to “the ville.”

The men’s side of competition was not nearly as close, as the Louisville squad was in full-on-point-assault mode, with several key Cardinal swimmers earning multiple event wins.  Caryle Blondell cleaned up in the sprint freestyle events, winning the 50y race in 20.22 and the 100y contest in 44.35.  Backstroke weapon, Grigory Tarasevich, doubled up and won both the 100y and 200y backstroke events in 48.83 and 1:46.13, respectively.

Trevor Carroll also pulled off two major wins for the Cards, as he took home the 200y freestyle in a time of 1:36.14, almost three seconds faster than the rest of the field.  Carroll’s time of 4:29.34 in the 500y freestyle was also fast enough to win the event, narrowly out-touching runner-up Kentucky freshman, Isaac Jones, by just .57 (4:29.91).

Kentucky’s Drew Aviotti scored some much-needed Wildcat points in the men’s 1000y freestyle, as he topped the field in 9:12.33.  Sophomore Kyle Higgins paired up with Jones to bring the UK team a powerful 1-2 finish in the men’s 200y butterfly, closing in 1:47.92 and 1:49.17 for their efforts.