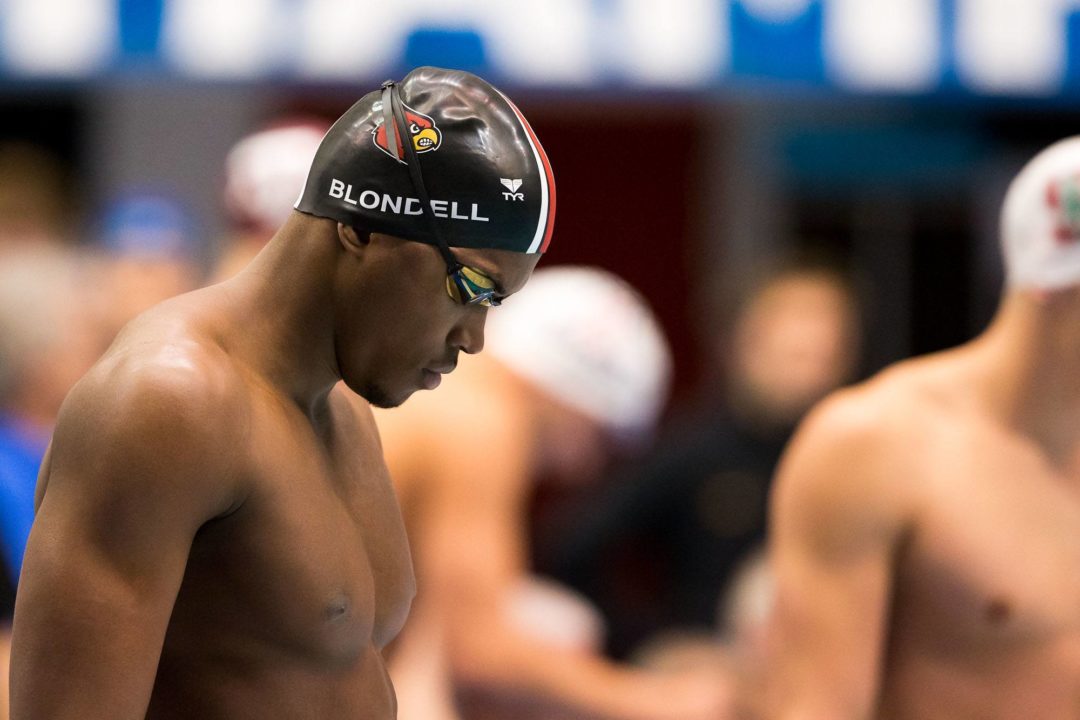 Caryle Blondell is the new NCAA leader in the 100 yard freestyle. Archive photo via Tim Binning/TheSwimPictures.com

That 200 fly was a little bit of a rematch against the Tar Heels’ stacked butterfly group, after Kylliainen took on some of them at the SMU Classic a few weeks ago at her big breakout meet. UNC’s Emma Nunn was 2nd in 1:59.03: the Tar Heels could have four NCAA scorers in that race alone this season.

Kylliainen also split a 53.1 on Louisville’s B 400 medley relay at the end of the session, but in their respective top lineups, North Carolina won that relay 3:42.17-3:42.92. The margin came largely on the backstroke leg, where Carly Smith was a 55.45 to Erica Belcher’s 56.55. Luckily for Louisville, it looks like Krissie Brandenburg, their top backstroker, is just about back to full health, having split 55.89 on Louisville’s “C” relay.

The Cardinals won the opening 200 free relay, but both teams looked very good in that race. Louisville was 1:32.51, and UNC was just barely behind in 1:32.58 (and with another two strokes, might have gotten the win). The top split was North Carolina anchor Lauren Earp in 22.70.

Other winners on the women’s side included Kelsi Worrell, a Louisville sophomore, in the 100 free with a 50.32. The top five finishers were all better than 51 seconds, but among them was a 2-3-3 (tie) for North Carolina. North Carolina’s Annie Harrison won the 200 back in 1:58.15. She is miles ahead of where she was in the fall semester of the 2012-2013 season, which could spell a big spring for her as well. Her teammate senior Carly Smith was 2nd in 1:59.39.

Despite a good number of Louisville wins, the North Carolina women are overwhelming them with depth. Against a deeper men’s team, though, day 2 will begin with a single-digit edge for the Tar Heel men.

They’re still deeper than Louisville, but the difference isn’t as noticeable. North Carolina, in the first individual event of the day, took four of the top five spots in the 200 IM. That was led by Dominick Glavich, who returns after missing last season, in a 1:49.55. Louisville’s Nolan Tesone took 2nd in an AAC-leading 1:50.20, but it was all Tar Heels after that.

UNC further pushed open their lead with an almost-as-dominant performance in the 500 free, led by JT Stilley in 4:29.68 and William DeForest in 4:30.82. Louisville freshman Trevor Carroll took 3rd in 4:31.66.

But then Louisville began fighting back in one of their best events, the 100 breaststroke, led by Kameron Chastain. Chastain was a 55.24, and he was followed by teammate Addison Bray (56.02) before North Carolina’s David Speese broke up the run, taking 3rd in 56.07.

In the sprint freestyles, Louisville really put up a statement, with Caryle Blondell winning in 43.85 and Joao de Lucca taking 2nd in 43.91. De Lucca is well-known, as the defending NCAA Champion in the 200 free, but Blondell has been building to this point for about 18 months now. Those two swims give Louisville the top two 100 freestyles in the country this season, and the only two swimmers who have flat-started better than 44 seconds so far.

The winning-streak was snapped at three, though, as North Carolina took the maximum points in the men’s 200 fly. That was led by another Glavich win, in 1:45.76, as UNC went 1-2-3-4 in this race where they’re almost as good on the men’s side as they are on the women’s.

After taking 1-2 in the men’s 1-meter event (out of only three total dives entered), the Tar Heels had a 7-point lead going into the session closing 400 medley relay.

The meet will resume on Saturday at 10 AM Eastern Time.