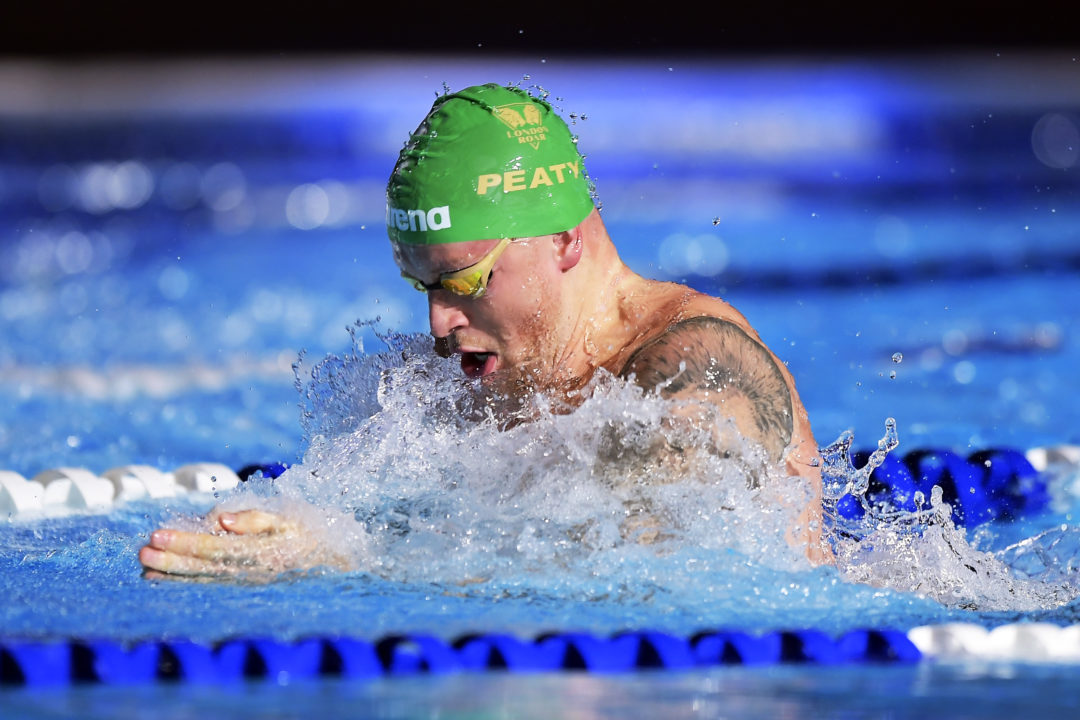 Adam Peaty and the London Roar are the favorites, on paper, at the International Swimming League championship this week in Las Vegas. Archive photo via Fabio Ferrari/LaPresse

The London Roar of the International Swimming League (ISL) have finalized their roster for this weekend’s finale in Las Vegas, Nevada. There are no new faces on the team, but the Roar will get a lot of their big names, especially Australians, back after missing the European Derby meet.

3 swimmers who have represented the Roar this season won’t be present in Las Vegas. That includes Bruno Fratus on the men’s side, who was only ever committed to 1 meet anyway, and on the women’s side Taylor McKeown. Peter Bernek, who swam at the European Derby, also won’t be on the roster for Las Vegas.

The Roar, even though they were missing big chunks of their lineup for multiple meets this season, tended to just swim shorthanded rather than try to fill those holes with short-term signings.

After leading early in the European Derby, Energy Standard, a team which has mastered the ISL format better than most to this point, swooped in at the last minute to win that title and top the European table. The Roar, however, were without Kyle Chalmers, Cam McEvoy, Elijah Winnington, Jess Hansen, Mireia Belmonte, and Matt Wilson at that meet. The most painful of those absences was Chalmers, who won the triple-points skins event in Budapest. Without him, they had no men final in the skins event in the European Derby. Winnington also had a big impact in his 2 meets, winning the 400 free in both Lewisville and Budapest. Bernek, his replacement in that event, was just 7th in the 400 free in London.

With a full roster returned for Las Vegas, the Roar, on paper, are the heavy favorites. The caveat here, though, is that the two European teams, the Roar and Energy Standard, are heavy on European swimmers, and Europe is coming off the European Championships last week. That means some athletes will be having to try and double-taper.

But that won’t impact as many Europeans as it might seem for the Roar: they have a ton of Australian and Canadian swimmers who won’t face that same conflict, plus a number of their European athletes didn’t actually race at the European Championships (Peaty and Belmonte, for example).

Only Energy Standard have yet to announce their roster for Las Vegas, and so far there haven’t been any major new additions to any teams’ rosters for the championship – though the LA Current did pick up 1 swimmer, Maddy Banic.

So as a team competition it is essentially pointless. The rosters are too unbalanced and Roar will win barring illness. Individual performances and match ups will be exciting of course.

I wonder who will be relegated to only relay duties? The only ones that make sense are McEvoy and Kisil as well as Ottesen and C2. Otherwise not all of the 28 swimmers will be able to swim.

they also have prigoda peaty and Wilson lining up as well…

I’m thinking they didn’t want to leave anyone out. Which is fair.

Yeah, if they have the roster space, then why not? Wilson is a great asset in the 200m breaststroke and can also fill in spots in other events too.

It means 2 swimmers of each gender can only be used in relays so eliminates using McEvoy in the 50 free or skins. You doing a start list??

Intersting.. I would put Cam in 50 free and skins over Scott. Anyway in the field which includes Dressel, Flo, Kyle, Adrian, Held and Proud it would be hard to qualify for top 4 for both Cam and Scott. And Cam is faster than Scott in 50 free. So i would use Scott more in the relays and there’s only one specialist swimmers that they have for 2 back. So i would rather use Scott in that event too.

Yes! Here it is: https://docs.google.com/spreadsheets/d/1VvRmoeA83vkN1xPkziBeIuhyWo_xcNvhoptwNhwTWY8/edit?usp=sharing

There were a few gaps in the PBs so I filled those in and added in the swimmers on the roster for the final. I tried not to overload Scott but he’s been dropping some impressive PBs so I ended up assigning him almost the same schedule as the one he swam in London lol. You’re right that the addition of Wilson looks to be a bit awkward because it seems like we don’t have any room to give McEvoy individual events so that Scott can take a break. The men’s 200m backstroke will struggle to find a second swimmer. If only there was some way to… Read more »

So we noticed all the same problems. Mine is below and it’s not much different to yours.

I just stuck Knox in the 200 BK and he might not even reach thr benchmark but I didn’t want to risk Guido not recovering for the medley relay given he’s not exactly built for endurance and wouldn’t gain many points in the 200 anyway. I was originally gonna put Kisil in there but he’s a relay only swimmer now.

Hm, I think you’re right about the 200 back. I also thought Knox would be more likely to miss the minimum time, but I guess it’s better to just take the L there and save Guido for the medley relay. I forgot that Graham did the 50 fly back in Lewisville, and that was a better time than either of Prigoda’s.

I like that you put Barratt in the 50 free as an option to try to save McKeon for the 200 free. I feel like leaving Belmonte off the roster would’ve been a decent option since she’s only been better than the other options in one event (400 IM) and this forces C2 and Ottesen into relay-only roles, while… Read more »

I actually didn’t put a lot of thought into optimising the relays and I might even have another peek at it today.

I agree about Belmonte and she wasn’t really any better at a meet in Amsterdam last weekend but it seems they might just want to give as many team members as possible a go at the final.

For me losing McEvoy to relay only is a bigger problem than Bronte or Ottesen because he probably still has a better chance to progress out of R1 in skins than Scott.

Edit: Oh, I also chose Prigoda over Peaty in the 200 breast because of the better PB.

Optimizing relays is tricky since there are multiple factors to consider—how other teams stack their relays, how well swimmers taper, etc.

I have a bit more faith in Scott now that he’s set multiple 50 free PBs this season and also swam a similar time to what McEvoy did in R1 of skins. But yeah, he has enough on his plate that it might’ve been better to leave Wilson out and put McEvoy in the skins instead.

I think either Prigoda or Peaty is fine in the 200 since they’ve done similar times so far. I picked Peaty because I value being in PB shape a little bit more than super fast historical times but being off those times… Read more »

Eventhough Peaty had a great 200 breast in London, I’d take Wilson over him anyday for 200 breast. Further, Wilson is a good imer and decent freesyler who can contribute more in some relays.

I’m guessing wilson will be slated to do 200’ breastroke and IM..

You have Scott, Lanza, Wilson for the 200 IM.. will need to see who went better.. Is there any other Imer?

Knox has been looking good recently

Knox swam it at every meet so far.

I think they overswam Scott in London though, so I guess they’re looking carefully at his schedule.

I agree. With all of their swimmers back, though, they should be able to avoid that problem this weekend, though.

Roar are my favourite team to win.. mainly due to the plethora of Aussies involved plus Peaty as well

this statement appears incorrect though “The Current, however, were without Kyle Chalmers, Cam McEvoy, Elijah Winnington, Jess Hansen, Mireia Belmonte, and Holly Hibbott at that meet.

Ooops. That didn’t even register when I read it.

They also had Holly Hibbott but didn’t have Matt Wilson at the London meet.