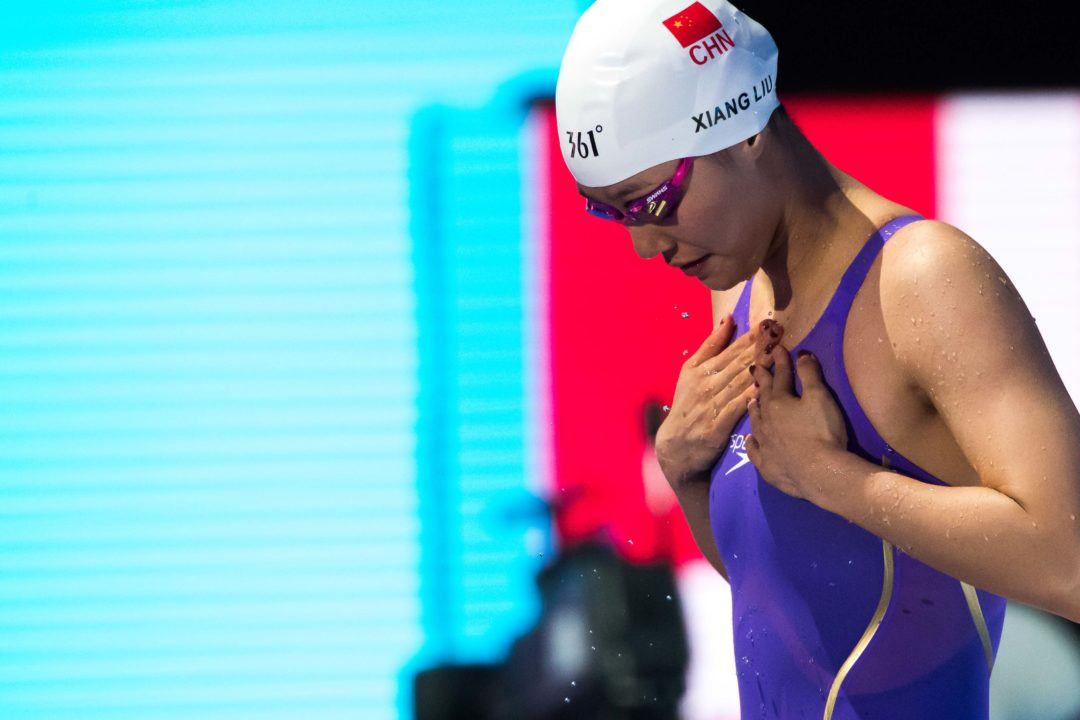 Yesterday we saw Liu Xiang produce a top-seeded effort of 24.23 to lead the women’s 50m free semi-finals. But on the last night of competition at these 2021 China National Games, the 25-year-old busted out the swim of her life to clock a new continental record.

Getting to the wall in a mark of 23.97 tonight for the gold, Liu beat out speedster Zhang Yufei who settled for silver in 24.29 and Cheng Yuije who collected bronze in 24.41. In doing go, Liu became the first-ever Chinese woman to get under the 24-second threshold in the event, as well as the first woman ever from the Asian continent to do so.

Entering this meet, Liu held the Chinese national record at the 24.03 she posted at the 2020 FINA Champions Series. With her outing here tonight, she dropped .06 from that mark to make history with a new Asian record.

Liu was 24.61 in the 50m free event at her Chinese Olympic Trials for 3rd place, thus not racing the event individually at the Olympic Games this past summer. Instead, it was Zhang and Wu Qingfeng who tried to make it onto the podium. Zhang and Wu both tied each other with a time of 24.32 out of the semi-finals, but Zhang wound up dropping out of the swim-off.

Liu Xiang always seems to swim fast as some point of the year but never at a big international meet.

She had a shot at a medal in Olympics if she had qualified for sure.
Off note , isn’t she 50 backstroke WR holder.

It seems that every time something like this happens, there are Americans who automatically assume there must be doping afoot, and people from other countries who resent the Americans for casting aspersions on foreigners but never on themselves. There’s justification on both sides.

Given that China had a state-sponsored doping program in both swimming and track in the 1990’s, it’s not unreasonable to be a little suspicious of Chinese athletes. Since that decade, there doesn’t seem to have been any such program; but Sun Yang, both through his success, his visibility, his obstreperousness, and his eventual conviction, has managed to single-handedly cast a slight pall over Chinese swimming.

There are other substances that would be extremely beneficial to a swimmer that you could dope with. EPO is an example, and if you are VERY precise in your administration under guise of a doctor and chemist, you can pass all your tests while taking it yet still reap the benefits (which are MASSIVE, and if you don’t believe me, watch admitted juicer Chael Sonnen’s video about it). It is also theoretically possible to use 100% bio-identical hormones and under monitoring keep things like your T/E ratio, LH, IGF, GH levels within the allowed reference range–this would be an extremely expensive process, as such bio-identical substances aren’t commercially produced and would have to be made by whoever you are working… Read more »

Both you guys seem to know your stuff, what do you think about Nicolas santos?

I’m taking really, really specific designer-type bio identical hormones that can pass currently employed MW, CIR, spectroscopy tests from WADA, not the stuff TRT clinics try to market as truly “bio identical”. Yes, these have been synthesized in research labs but have and likely will not ever be commercially available, as it is extremely expensive to make and the utility is quite low–most average people looking to get HRT couldn’t care less if their T is being produced from a yam, as they don’t need to pass a USADA test. Furthermore, I don’t think CIR testing is normally employed unless your T/E is outside of the reference range or your are part of their random audits. It is a very… Read more »

She would have gotten silver in Tokyo with that time

Significantly faster times than ever before at a off-season Chinese exclusive event???????????? No questions about that here.

Sir I don’t know what you’re trying to imply

And Claire Curzan swam her fastest time of the year at a local meet.

Not sure if you read the article properly.

Entering this meet, Liu held the Chinese national record at the 24.03 she posted at the 2020 FINA Champions Series. With her outing here tonight, she dropped .06 from that mark to make history with a new Asian record.

The National Games are far from off-season, they are absolutely *huge*. Think superbowl in the USA or the FA cup final in England and you begin to get close to its equivalence. It’s the biggest domestic sporting event in the Chinese calendar and matters hugely to the athletes. Those who didn’t qualify for Tokyo will have geared their whole season towards this meet, and even those who did will have planned a double taper.

As someone who has competed in this event in 2017, the rewards for winning are substantially greater than some international meets. Compensation for winning at this meet in 2017 was more than 2017 Worlds. I’m not sure about the Olympics, but there is much more incentive to compete well domestically than internationally.

FAR from ‘off-season”. Try the biggest competition outside the Olympics (for many, bigger than the Olympics as its all about Provincial bragging rights here…

Bring a Chinese athlete must suck

Bro, seems lots of questions for you…

It’s not off season if you are Chinese!
The biggest event for them in the 4 year cycle.
It was the Olympics that was “off season” if you know the Chinese sports calendar