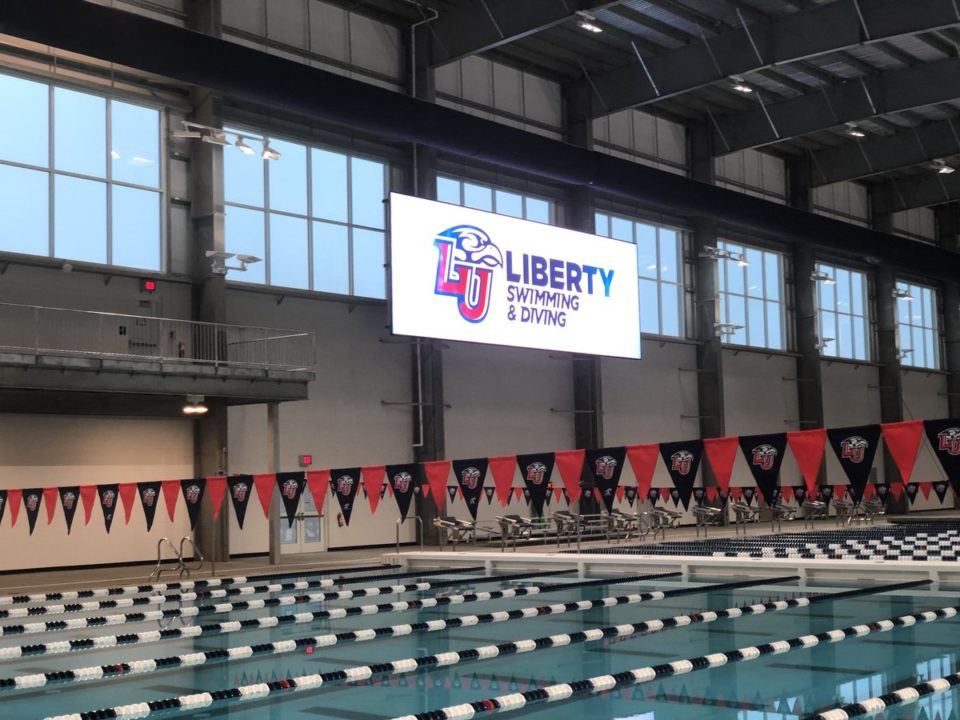 Liberty will compete in a tri-meet at Penn State on Friday, taking on the Nittany Lions and St. Bonaventure, and swim at Saint Francis (Pa.) on Saturday. Current photo via Liberty Athletics

LYNCHBURG, Va. – The Liberty swimming & diving team begins its 2019-20 season with a pair of meets inside the Commonwealth of Pennsylvania. The Lady Flames will compete in a tri-meet at Penn State on Friday at 2 p.m., taking on the Nittany Lions and St. Bonaventure. They will then compete at Saint Francis (Pa.) at 11 a.m. on Saturday.

• 10th-year Head Coach Jake Shellenberger has led the Lady Flames from the program’s inception. He has posted a 99-30 dual-meet record, being named CCSA Women’s Swimming Coach of the Year three times (2012, 2014, 2019). His teams have gone 53-14 all-time against CCSA competition.

• Liberty won its second-ever CCSA title in 2019, and first since 2014. The Lady Flames scored a meet-record 1,859.5 points while ousting four-time defending champion FGCU by nearly 200 points. It came five years to the day after Liberty’s first championship.

• Liberty has won its last 23 dual meets in a row, a streak that began at the Gardner-Webb Tri-Meet on Oct. 27, 2017. It is the second-longest active dual-meet winning streak in NCAA Division I women’s swimming & diving, trailing on Stanford’s 30-meet winning streak.

• The state-of-the-art Liberty Natatorium opened on Dec. 1, 2017 with the Central Virginia Duals, and was dedicated on Jan. 26, 2018 with an official ceremony. The Liberty Natatorium provides one of the best venues for collegiate swimming and diving in the nation, with a Olympic-sized competition pool and separate diving well and seating for 1,400 spectators in a wraparound setting.

• This trip has special meaning for Liberty coaches Jake Shellenberger and Jessica Barnes, as Shellenberger was an assistant coach at Penn State for three years and Barnes swam for the Nittany Lions. Additionally, current Liberty senior Hannah Baker’s mother Cindy and older sister Sarah competed in swimming at Penn State.

• Junior Payton Keiner returns after winning both the 100 back and 200 back at the 2019 CCSA Championships. She won the CCSA 200 back as a freshman, and competed at the 2018 NCAA Division I Women’s Swimming & Diving Championships. The 2018 Most Outstanding Freshman of the CCSA Meet, she holds the CCSA record in the 200 back (1:53.68).

• Senior Brittany Weiss is a two-time CCSA champion in the 100 back, winning in program-record 52.81 in 2018. She was named the 2017 Most Outstanding Freshman of the CCSA Meet.

• Sophomore Olivia Robinson, the 2019 VaSID State Rookie Diver of the Year, scored the most points by a Liberty diver at the 2019 CCSA Championships (62), taking second in both one-meter and three-meter. She holds Liberty’s record for platform diving (229.58).

• Penn State is 2-0 all-time against Liberty in swimming & diving, defeating the Lady Flames at the 2014 Virginia Tech Swimming & Diving Challenge and at a tri-meet hosted by Georgia Tech on Oct. 2, 2015.

• Liberty is 1-3 all-time against Big Ten opponents, including 1-0 versus Michigan State, 0-1 against Illinois and 0-2 versus Penn State.

• This will be Liberty’s first meeting with either Saint Bonaventure or Saint Francis (Pa.).

• Liberty opened the last five seasons with wins at longtime CCSA foe Campbell. The last time the Lady Flames’ season opener took place some place other than Buies Creek, N.C., was 2013, when Liberty went 2-2 at the Virginia Tech Swimming Challenge.

Liberty’s swimming & diving squad will split up next weekend, as the swimmers will take on Campbell on Friday in Buies Creek, N.C. and the divers will contest a tri-meet at UNCW on Saturday in Wilmington, N.C.