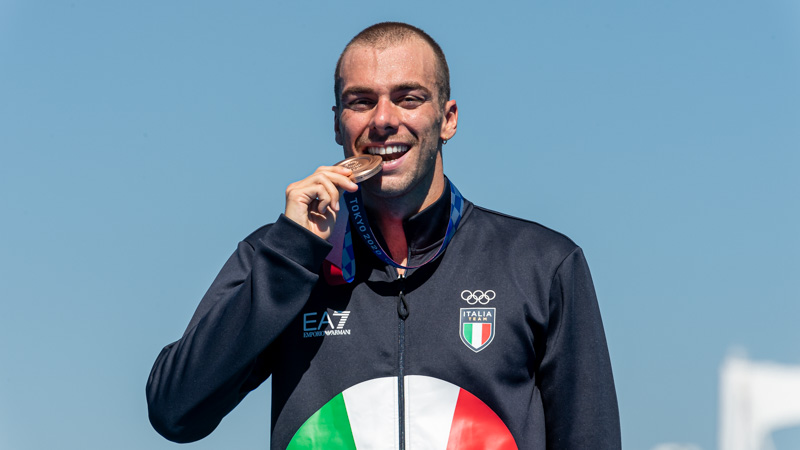 Italian superstar Gregorio Paltrinieri won the Piombino and Alghero stops back-to-back last year, but has yet to reach the top of the podium in 2022. Archive photo via Giorgio Scala / Deepbluemedia / Insidefoto

After two bronze medal finishes, Gregorio Paltrinieri is expected to step up and retain his title in Alghero, at the third leg of the LEN Open Water Cup this Friday. The Italians have a good chance to a podium sweep in the women’s race too.

While last October European champion and Olympic bronze medallist Gregorio Paltrinieri claimed back-to-back titles in Piombino and Alghero to finish the season on a high, the Italian king is yet to win his first race this season as he had to settle two bronze medals in the first two legs.

A week ago in Piombino, it was a bit surprising that not Greg’s old foes managed to finish ahead of him but France’s emerging prodigy Sacha Velly and Italy’s Marcello Guidi stormed to the panel in the first two positions. Guidi will have another shot this Friday too, though the French and the Hungarians, including Leg 1 winner Kristof Rasovszky, skip this leg.

This seems to open the way to Paltrinieri, however, a handful of his teammates like Eilat runner-up Domenico Acerenza or former world and European medallists Simone Ruffini and Matteo Furlan may impose a threat. And don’t forget Israel’s Matan Roditi and Greece’s Athanasios Kynigakis who surprisingly came 4th and 5th respectively at the Olympics in Tokyo.

Being a bit off from the coast of the continental Europe, at the shores of Sardinia, the field is moderate compared to last week’s giant gathering of 101 male competitors – this time there will be more space as 32 swimmers are to line up for the start.

As for the ladies, the Italians also have a strong chance to keep the title at home at last since the French and the Germans are staying away. Last time it was a German 1-2 here in Alghero, Leonie Beck came first who also won in Piombino a week ago.

The Italians are back with full force, Rachele Bruni and Giulia Gabbrielleschi shared the minor spoils last Friday, but Eilat bronze medallist Ginevra Taddeucci is also a strong challenger. In this race the Hungarian squad may prevent the hosts from a complete sweep of the podium, led by European runner up and Olympic 4th Anna Olasz who didn’t race in Piombino.

This leg, starting at 9.00 CET, can be followed via live stream, visit our website for more: www.len.eu