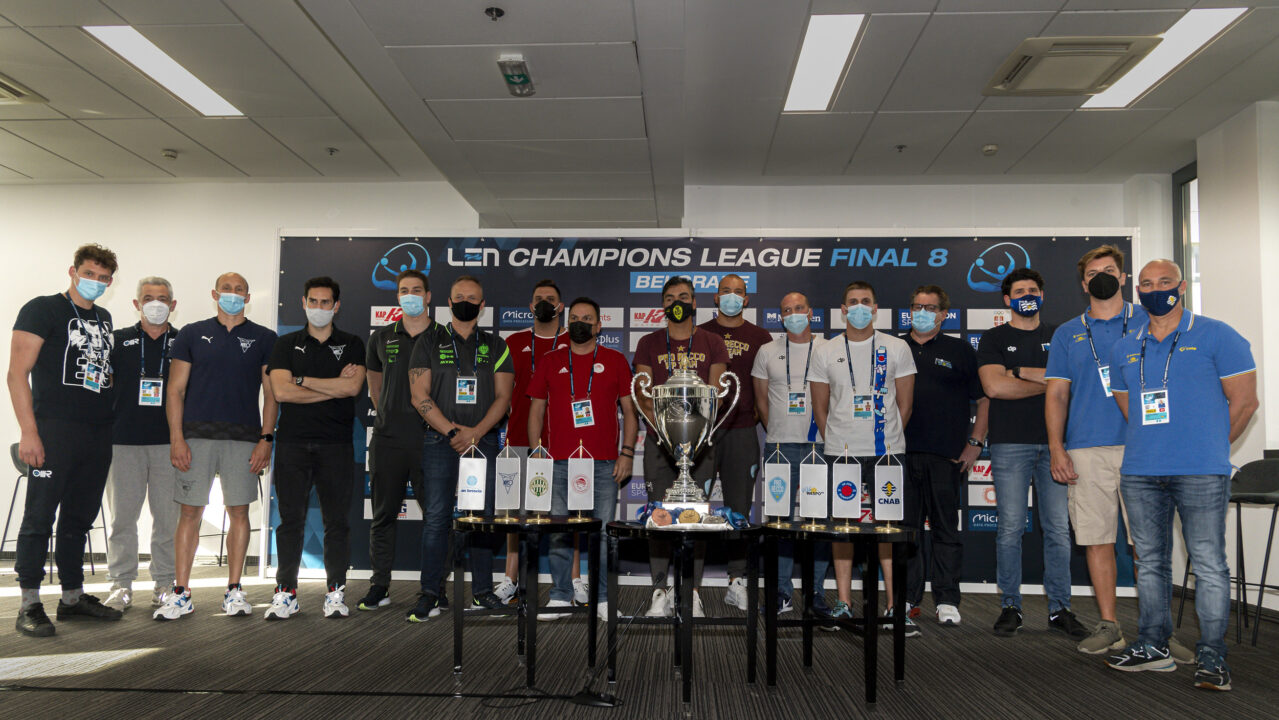 With no clear favourite at the end of an extraordinary season, the Champions League Final Eight promises even more excitement than any other edition. Current photo via Giorgio Scala / Deepbluemedia / Insidefoto

With no clear favourite at the end of an extraordinary season, the Champions League Final Eight may promise even more excitements and surprises than any other editions before. Since the new format of the F6/8 has been inaugurated in 2014, the six titles on offer went to six teams and five of them are here in Belgrade.

Expect the unexpected – never before was the saying so valid for the Final Eight than this year when the preliminaries were played in bubbles and the clubs were hit by the pandemic in various ways.

But even the pre-Covid era was full of surprises. The last time a team could retain the title dates back to 2008 when Recco could repeat its triumph from 2007. And even though the Italian side has always been considered a favourite, based on its quality and usually overwhelming performance in the prelims, in the past decade they lifted the trophy only twice and their last victory came in 2015. And even though they finished the main round with a perfect record again (10/10), their stunning loss to Brescia in the Italian final shows that Recco is far from being untouchable. Anyway, their quarter-final against Hannover looks an easy obstacle but their problems usually started in the semis in recent years.

The field has become quite even, and even though the elite sides usually advance to the endgame – seven of the 2019 participants are here in Belgrade too –, the last six editions saw six different winners. Title-holder Ferencvaros offered one of the finest examples for an unexpected rise in Hannover as they managed to go all the way despite finishing 4th in the prelims and taking part in their first F8 ever. Still, they could not even make the finals in the home league this season (finished third), so even if they managed to grab the top spot in Group B, they cannot take anything granted against fourth-placed Marseille in the second QF.

The French had high hopes and a finely strengthened line-up but started the prelims with bad defeats – then caught the wave in the spring and even had a shot for higher places at the end. This game may end up in a thriller – besides being the re-match of the 2019 Super Cup final.

The tightest contests on the opening day are usually the ones between the second and third placed sides. The clash of Jug and Brescia is a must-see encounter featuring teams having taking different paths recently. Brescia upset Recco in the Italian final causing shockwaves as they halted their archrival’s 14 year-long reign at home. Alessandro Bovo’s brilliantly organised team showed some strength in the prelims by defeating home side and titleholder Ferencvaros twice with ease, though they also fell to Baceloneta (and later to Montenegrin Jadran). Anyway, their last act shows they are ready to get rid of their F6/8 demons as they could never win on the opening day in their previous three appearances.

On the contrary, Jug failed to advance to the semis for the first time in 2019 (lost to Ferencvaros) but the Croats have even fresher wounds as they also lost at home to Mladost, failing to win their 6th straight championship gold. Jug went through the embarrassing moments in the prelims as well when they lost 18-3 to Recco, contributing a great deal to the strange outcome to see a second-placed team with a negative goal-difference.

The last quarter-final is the one where two former champions meet: 2014 winner Barceloneta takes on 2018 victor Olympiacos. This is a mouthwatering fixture with two clubs which continued to dominate at home and also coming up some fine water polo in the Champions League too though both lacked the once-usual consistency in this season.

After a season spent in bubbles, the final phase will not see spectators either in Belgrade where upcoming Serbian club Novi Beograd took on the role of the organiser in a three-year deal which offers the club a wild-card for the next two seasons and a guaranteed spot in the 2022 and 2023 Final Eight. It’s yet to be seen if Novi Beograd arrives to next season’s Champions League as the newly crowned champion as they play the decisive third match of the Serbian championship final with Radnicki Kragujevac later this evening.

Quotes from the Opening Press Conference

Gabi Hernandez, coach, Recco “I’m sure all of us feel that playing in Belgrade is special, this place you always see serious water polo. Now we face a short but very tense competition where everybody speaks about the first day. That’s true, the impressions, sensations we can get in the first game have a real affect on the following ones. It is a pity we cannot share this show with the fans but I hope it will change in the future.”

Dusan Mandic, player, Recco “This is a real honour and pleasure to be in Belgrade, unfortunately without audience this time. It’s really interesting to see these teams playing at a really high level, to see the good things and shortcomings during the matches – hope we have more from the first one this time.”

Karsten Seehafer, coach, Hannover “We are happy to be here in Belgrade and to be able to play against the best teams in Europe. This is the easiest situation for us as we have nothing to lose, we are classical underdogs. We have a good team and very good players and perhaps I can see a great team effort tomorrow.”

Aleksander Radovic, player, Hannover “We had a goal in this season, to make the Final Eight, and we achieved that. Now we are in a good position and we will fight till the end while giving our best tomorrow.”

Zsolt Varga, coach, Ferencvaros “I’m really sorry for the year lost for several reasons, one of them was that we had a really great team. At the end of this season we will try to give our best but we had a lot of problems, not only Covid but also injuries, but the infections and the post effects were the most serious which also influenced our performance in the last months. Here I see at least seven teams which can win this tournament and that’s a good so we can hope we will enjoy three great days of water polo.”

Nikola Jaksic, player, Ferencvaros “Unfortunately this year we won’t have spectators in the final – in next two years we expect to have the fans back. For the coming days I hope for the best.”

Milos Scepanovic, coach, Marseille “Actually, I think we took an extra path in the Champions League and it’s a great success for our club to make the finals. We want to achieve something more but we face great teams, great rivals so we can get a clear picture on our quality and that’s good for the future. I think this is really a great way to continue our journey at this level of water polo.”

Andrija Prlainovic, player, Marseille “I’m really satisfied and happy to see that we’ve made the. We are really ambitious and we want to advance in our first game against Ferencvaros and have a successful tournament.”

Vjekoslav Kobescak, coach, Jug “I think this is the most important tournament in the season, too bad that we won’t have any spectators but hopefully we have lots of fans next year. I think there is no favourite team here, which is good, especially for the fans who love water polo. We lost three finals this season but hope we have the chance to improve and perhaps win this trophy.”

Loren Fatovic, player, Jug “I think everyone is in really good shape at this stage since we have all been waiting for this tournament. We heard many positive things from the others spoke before me so I just say, I hope our team is going to be the winner.”

Alessandro Bovo, coach, Brescia “To be here is very important for us. We are very happy for our results so far, tomorrow we try to show our best since for us this is the fourth time in the Final Eight but we always lost on the first day before, including games against Barceloneta in Barcelona and Recco in Genova. Now I hope that tomorrow it will change, we can play a bad game but hope to win it.

Djordje Lazic, player, Brescia “I’m glad to play in Belgrade, the city where I was born and started to play water polo and it’s also great to have this event here in New Belgrade. We have the highest ambitions but we need to take a step-by-step approach and all players in our team share that.”

Chus Martin, coach, Barceloneta “Many thanks for the city of Belgrade to organise this final, it’s not easy to host an event like this today. In the most important match we meet a very difficult opponent Olympiacos, finalist in the last two editions. We try to do our best to reach the final, though this competition is not easy but we should be ready for this challenge.”

Milan Aleksic, player, Barceloneta “I think we are having an excellent season and we are eying the highest prize here. First we face Olympiacos, I strongly hope we can win that match.”

Theodoros Vlachos, coach, Olympiacos “We are happy that we can be here since this season has been really hard for the clubs, this is the fourth bubble, it’s not easy for anyone. We reached the final three times in the last four years and based on our experience I should say that it is the first day which is really the most important. If you win, you can dream on with the trophy – and I hope we can win tomorrow.”

Konstantinos Mourikis, player, Olympiacos “We are preparing for these games all year. In our first match we play with one of the greatest teams Barceloneta – I hope we have the best of luck tomorrow and I wish that for all the other teams.”