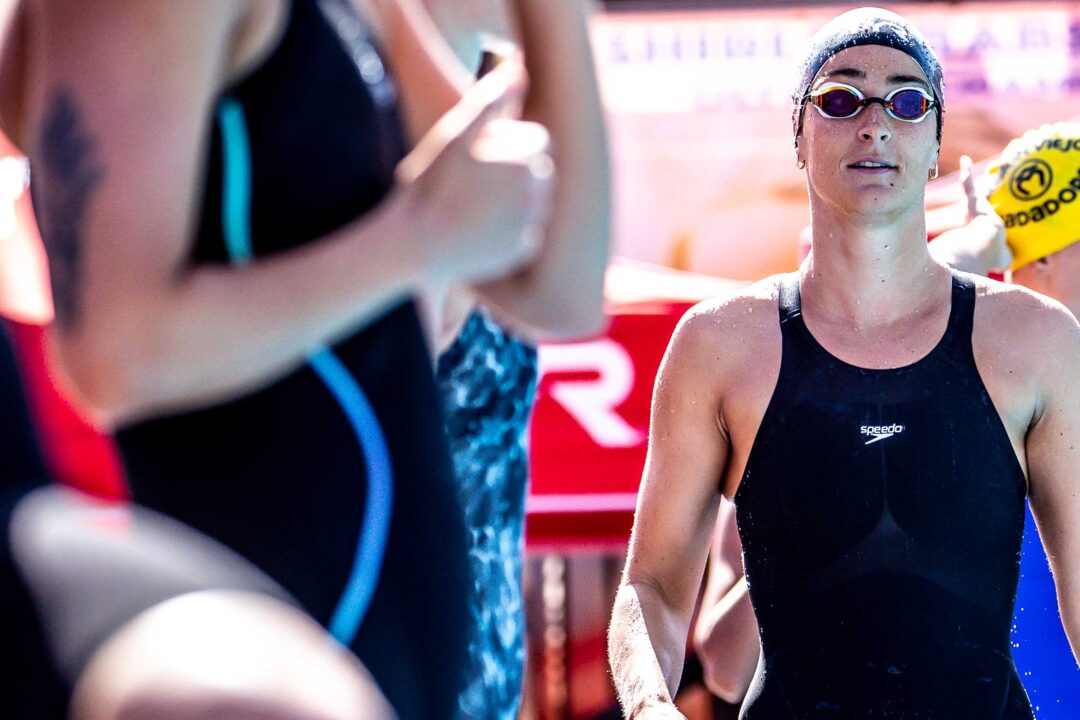 Smith would go on to win this at 8:24.46, a new season-best by over a second to jump from sixth to fifth in the world rankings. Current photo via Jack Spitser/Spitser Photography

There were only six swimmers in the women’s event, all fitting in one heat to start off the meet. Katie Ledecky is racing this week, but she was not entered in this event, and Leah Smith pushed the pace early.

Smith would go on to win this at 8:24.46, a new season-best by over a second to jump from sixth to fifth in the world rankings. Second went to Ashley Twichell of the TAC Titans in 8:27.41, only two seconds off of a best and her first time under 8:30 this season. Twichell now ranks 11th in the world.

Haley Anderson of Mission Viejo Nadadores looked on-pace for third, but Sun Devil Swimming’s Emma Nordin split 31s to Anderson’s (mostly) 32s over the final 250 meters or so. Nordin broke through for third in 8:29.67, which is her first time under 8:30 and a massive lifetime best by over seven seconds. Her old best, an 8:37.00 from the 2019 Los Angeles Invite, was her first time under 8:40.

I usually go double coffee just to make it to 10am. Impressive what they all are doing with this.

I don’t see any reason to include into rating procedure results shown last year. Only times shown by a swimmer this year can qualify her to be an Olympian. It would be more informative to see how many swimmers have already passed this threshold and what their forms are a half way through.
For example, why would I care how good Efimova was at 200BR last Autumn if she is not qualified to race at this distance in Tokyo.

I mean… It’s going by season bests? What else do you expect from a ranking that’s using season best times? You could have another ranking chart could be made to show what swimmers have trial cuts, and a chart to show what times they went at trials, but we’re talking about a completely different one than the one that’s actually being used.

My god you have returned

20
0
Reply
TYR dropped everyone / what a PEATY

her cap looks like it says TYR though…this seems weird. she has seemed to still be TYR in all her recent instagrams

TYR hasn’t posted anything about her in a while and gave a shout out to Ashley for coming in 2nd on Instagram, but not Leah. They also didn’t post anything about her at the last PSS. I’ve actually been wondering about her status with TYR for a while since they don’t seem to have included her in any posts since last summer. I think it’s fairly safe to assume she isn’t under contract with them if she’s wearing Speedo. I wonder if she’s wearing speedo to explore her options especially given Cody’s recent switch.