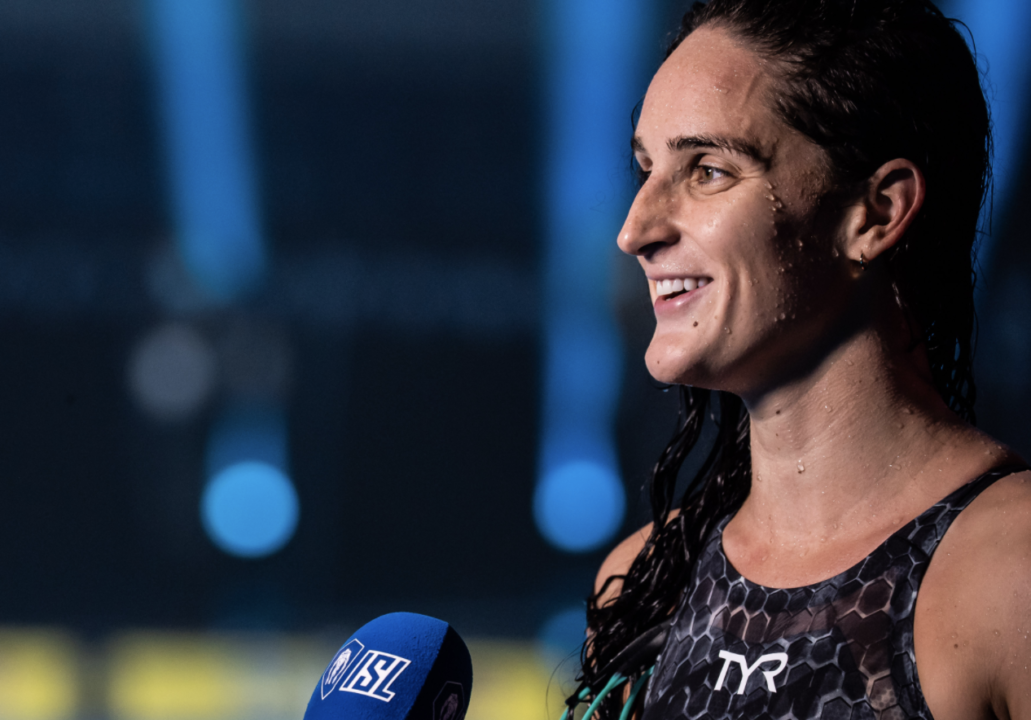 2016 Olympic gold and bronze medalist Leah Smith, above, has moved to Austin to train as a pro at the University of Texas. Archive photo via Mike Lewis/Ola Vista Photography

2016 U.S. Olympian Leah Smith has moved to train with Carol Capitani and Mitch Dalton at the University of Texas, she confirmed to SwimSwam on Tuesday.

“I moved to Austin in August and I am training with Carol and Mitch and the women’s team at Texas,” Smith said. “It’s been so fun getting to know a whole new team and coaches. The girls have been so welcoming and awesome to train with.

“I’ve always had a lot of respect and admiration for both Carol and Mitch and so I’m very excited for my journey with them, and to cheer on Texas this year!”

Smith said that she was grateful for her time at Arizona. “I’m very thankful to the coaches at Arizona for everything we did over the past few years together and I’m excited for what’s next!”

Smith represented the United States in Rio at the Olympic Games, where she won gold while swimming a leg of the finals 800 free relay, plus an individual bronze medal in the 400 free. She also placed 6th individually in the 800 free.

Smith has a number of other individual international medals as well. That includes 2 golds, 2 silvers, and 2 bronzes from the long course World Championships. At the most recent World Championships, in 2019, she won silver on the 800 free relay and bronze in the 400 free.

In short course, she won gold in both the 400 and 800 frees individually at the 2016 World Short Course Championships, part of 5 total World SC medals. She also has 5 Pan Pacific and 2 World University Games medals.

In spite of a run of international success after the Rio Olympics, Smith didn’t qualify for the Tokyo 2020 Olympic team. She finished 4th in the 400 IM final, 3rd in the 400 free final, and 8th in the 200 free final. She didn’t attempt the 800 free at Trials.

Even with Virginia’s recent rise to become the top women’s program in the country, Smith still holds school and ACC conference records in the 500, 1000, and 1650 freestyles. Paige Madden, who won the 200, 500, and 1650 free at the most recent NCAA Championships, broke her record in the 200 free last season.

No Tokyo 2020 U.S. Olympic female swimmers trained at the University of Texas in the runup to the Games. Two would-be Longhorns, however, did: Lydia Jacoby, a breaststroker who won the 100 breast in Tokyo, will join the program next fall. Erica Sullivan, who took silver in the 1500 free, is a freshman this season.

Smith was signed to the Tokyo Frog Kings’ roster for the 2021 International Swimming League season, but did not make any regular season appearances. Tokyo finished 4th in the playoff “Play-In” match two weeks ago, which ended their season.

I wonder if she’s started her career in Austin?

Can we also get updates on other movements outside America – anyone reached out to Meg Harris on her move to Marion. How about Mack Horton to Michael Bohl?

Is Simone Manuel still at Stanford and/or training any, since we’re on the switching topic?

I’d love to see Simone come east and try out a sprint program like a UVA or NCST — or a David Marsh program in San Diego.

I wouldn’t recommend Marsh’s program. Who from that program has performed well lately?

Baker set a world record in 2018. That’s not 3 decades ago. If you don’t think Marsh is one of the best coaches if the world you’re insane. He’s also worked with Baker through her issues with Celiac and helped guide a 35 year old to Olympic gold. If anyone understands how to not push his swimmers to a breaking point it’s Marsh.

He has ruined ever swimmer he has worked with recently… ruined

Yes, Catie Deloof who trained with UVA. She left TE.

I don’t know when NCST has produced a good sprint female?

At the risk of quibbling over the defeninition of “good,” Aly Tetzloff has done well since training there. Kylee Alons has developed very nicely there – 49.73 out of HS to 47.71 at NCAAs last year in yards.

For sure they haven’t developed a female sprinter who is in Manuel’s league, but in general they are performing very well as a team, and there would be worse ‘gambles’ for her to make than giving it a shot.

Kylee Perry was no slouch and Alons is a stud.

Yeah good one, forgot about Ky-Lee.

If you just want us to speculate I’ll guess that she retires. Why do something that is so detrimental to your health?

It’s OTS something you can work through if you still love the sport, which she says she still does.

Whenever the word syndrome is used it means that underlying problems are not really clear. During one year two best ever and the only 52sec US swimmers couldn’t even make relay team at Trials. And not because the competition was strong. They were out of picture completely.
But nobody even bothers to talk about unexpected decline of Comerford. How the Manuel’s case is different.
Ah, I forgot – OTS. That explains 😀

You have to feel sympathy for Comerford dropping off as far as she did. She swam ISL even and still struggled going times she could easily beat a couple years ago and not one word mentioned anywhere. I wonder if her and Swimone could benefit from a reduced workload training program probably needs to be something outside the box. Look at what Wasick did taking a break and coming back going crazy fast times.

I mean, her times fell off, but she’s no Joe Schooling.

you really love using that one emoji after every sentence

I see quite a few sentences and only one emoji.

Uh, the underlying reason for Down’s Syndrome (and about 100 other syndromes) is perfectly clear. And if you don’t think elite athletes overtrain to their detriment, especially in an Olympic year, you haven’t been paying attention. As for Comerford, you could ask the same for Schmitty and why she can’t come near her 2012 times. The difference is, Schmitty was better at her best. The fall-off, percentage-wise, has been similar.

I’m not a doctor to argue with you. Just referring to the definition:
Syndrome – a group of symptoms which consistently occur together.
Different underlying reasons can cause similar group of symptoms. BTW, do you know who came up with this OTS statement? Her doctor or coach or her representative? And why it was announced so late then? Manuel was unusually slow all season long. From the very beginning. And therefore I am not really buying this OTS stuff. I was fooled once with this back muscles spasm that was used broadly to explain Missy’s downfall.
The example with Allison Schmitt isn’t the best one in this case. She was sick.

I read on the other swimming news source that Comerford had health issues – a case of Covid perhaps? – could well be that she had more lasting impact than others.

Or she’s dating a guy 10 years older than her that’s a known party kinda guy?

CORRECTION: Smith did swim the 800 free prelims at the Wave II Olympic Trials and was 10th.

Great news for the team!

My recollection is that Smith trained primarily with Chitwood during her successful years. After he left Arizona, it was surprising that Smith stayed and continued to train with Pete Richardson who has very little experience or success training elite level swimmers in general, let along Olympic level distance swimmers. I think Smith’s performance at Trials was more indicative of this vs. Smith not being capable of going faster. Wish her the best of luck, that training group with her and Sullivan is dirty!!