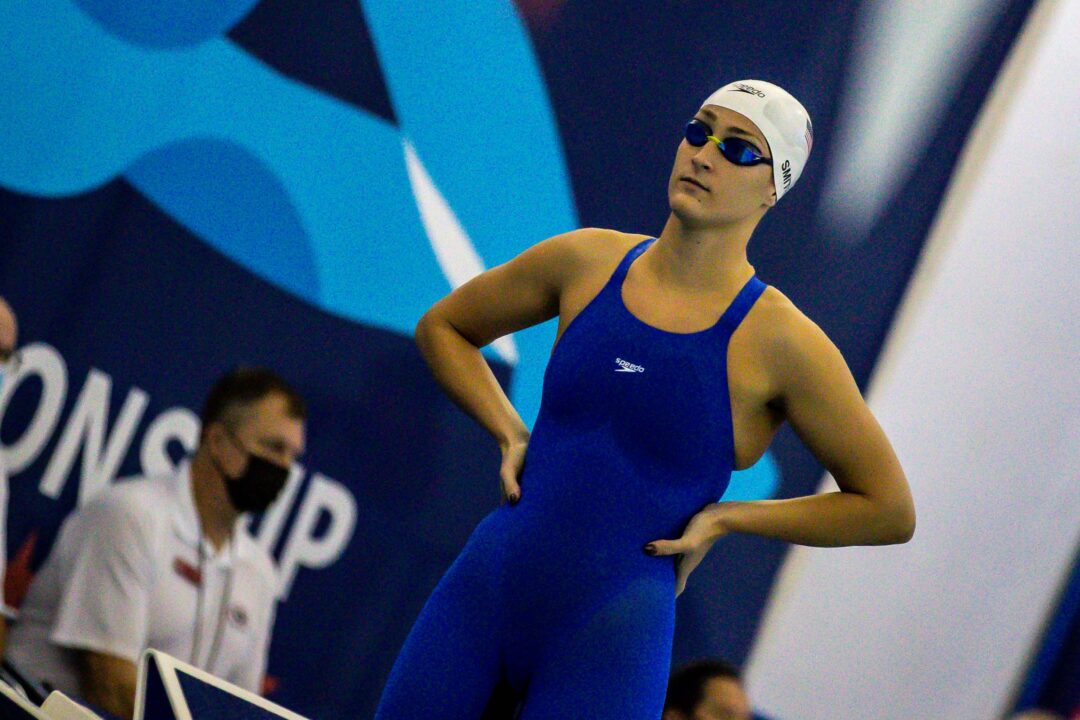 Smith, who recently changed coaches, would have placed sixth at U.S. Olympic Trials this year with her new best time. Current photo via Jack Spitser/Spitser Photography

After shaving a few tenths off her previous 200 IM best time in prelims, American Leah Smith — typically associated with mid-distance and distance freestyle — dropped a 2:11.67 in finals at the 2021 U.S. Open Thursday night.

That marked a best time by well over a second and would have landed her sixth overall at U.S. Olympic Trials — and seventh at the Tokyo Olympics. Smith split 28.23/33.56/39.14/30.74 on Thursday, winning the event three-plus seconds. Tennessee’s Summer Smith was second in 2:15.02.

“It’s [training at Texas] been awesome,” Smith said Thursday. “I love Carol [Capitani] and Mitch [Dalton] and the team. They’re just really special to me. It’s been great at this meet too ‘cause my whole team is at the Minnesota invite, so we’re swimming [apart] but being really supportive of each other and it’s just been really awesome to have a fresh start there.”

Smith has not really pursued the 1500, and has only swum it seven times in her career (one which earned her bronze at the 2018 Pan Pacific Championships, however).

Wednesday night’s swim begs the question of if she should make the pivot to focus more on her IM events, especially given the influx of young distance talent behind Katie Ledecky on the women’s side — although the IM events aren’t that much better. The 26-year-old has a plethora of individual and relay international medals to her name, but all in freestyle thus far.

That stat is insane. 6th at trials and 7th in the olympics?!

Only because Wilson and Hosszu threw in the final. This result in the olympics would be enough only for 13th in the semis and 16th in prelims.

That sounds more reasonable, thanks!

I agree. The feeling of swimming a personal best never gets old.