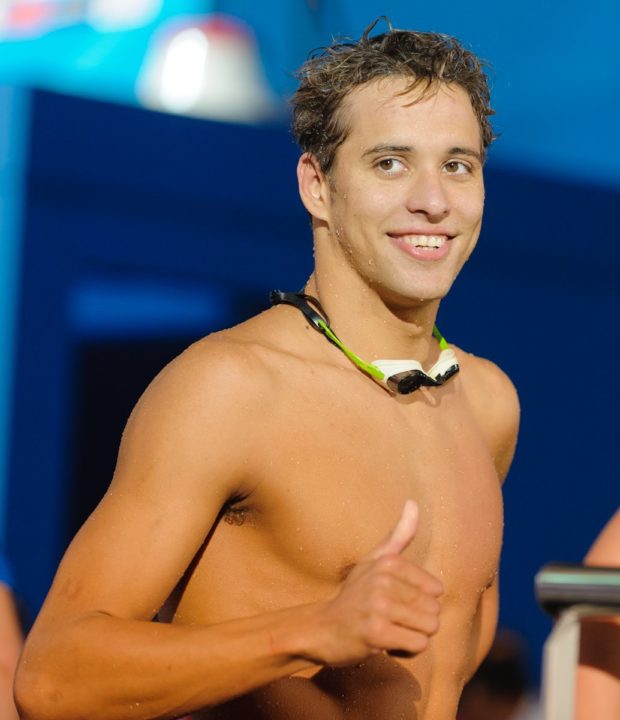 According to a letter sent out by Swimming South Africa, Chad le Clos has not registered an interest to race Michael Phelps and crew at the 2014 Pan Pac Championships. Archive photo via Victor Puig

Earlier this week, South Africa sent out a letter to 18 swimmers who had registered their interest for the 2014 Pan Pac Championships, and not among those 18 were some of the country’s biggest stars. That includes Chad le Clos, the double 100/200 fly World Champion, who early in the year seemed like he planned for a trip to the Gold Coast, but as of late has waned in that commitment. The country’s other 2012 Olympic champion, the 100 breaststroke world record holder Cameron van der Burgh, also left his name off of the list for Pan Pacs.

Also absent is the country’s veteran sprinter Roland Schoeman, as well as rising female swimmer Karin Prinsloo, who is having a career-year and could have hunted for a medal.

There are still a few well-known names on the list. That includes middle-distance freestyler Michael Meyer, who is a IM’er and 200 butterflier at Arizona in the United States; Gulio Zorzi, who won a medal in the 50 breaststroke at the 2013 World Championships; and Franko Jonker, who had a solid freshman season in the U.S. swimming for Texas A&M University.

As if the rosters weren’t enough, though, an even more prominent sign is the funding structure for the meet. The organization made big news earlier this month when they told U.S.-based swimmers that they would have to purchase their own flights for the Commonwealth Games. Though they eventually promised to reimburse all of those costs,  we have spoken to several athletes who have said that they are still awaiting reimbursement.

Now, SSA has sent the 18 interested team members a letter to inform them that the Pan Pac Championships is a fully self-funded trip, with an estimated cost of 30,000 Rand, plus visas. In U.S./Australian dollars, that will run the total to somewhere in the neighborhood of $3,500 per athlete. That includes informing athletes that they will have to reimburse SSA for lodging accommodations and that athletes will have to apply for their own Australian visas.

Unlike with the Commonwealth Games, this letter, signed by CEO Shaun Adriaanse, gave no indication that relief was possible. We have reached out to Swimming South Africa to ask if there were any potential contributions on the horizon, but South Africa continues to decline to respond.

In 2010, South Africa won two medals at the Pan Pac Championships in Irvine, California: a bronze in the 50 fly from Schoeman, and a bronze in the 400 free relay. In 2014, as many as 10 looked like a possibility, but in the listed roster of 18 participants, two medals look like a reasonable target again.

Para Pan Pacs qualifiers have been subjected to the same R30,000 cost requirement.

I do not really understand why a commonwealth games medal is more impressive than a Pan Pacs medal. Because the Pan Pacs has the greatest swim in countries in the world (USA, Japan, Australia, [South Africa, Brazil]) and winning there is essentially a world title. I would understand if some of the less successful/famous athletes decided to drop put due trip funding but people like Le Clos, Van Der Burgh, etc. Should be able to fund themselves no problem.

SamH – you’re thinking small, within the swim market. To the audience that is not swim fans, a Commonwealth Games medal is a much, much bigger deal, and that’s where athletes are going to land the big sponsorships.

Quite right Braden, and on that score they have made the right choice. They only way that Swim SA will be able to get additional funding from commercial sponsors or central govt. is to outshine all of the other sports at the Commonwealth games (Athletics and Rugby of all things!). Pan Pacs has more depth but would be lucky to get into the unfairly biased news papers as a single sport event.

It is a sad day when dedicated swimmers can’t get $3,500 off their association for a major championships. When will this end?

To add insult to injury the South african Rand has dropped around 70percent recently against major world currencies. This is not just a crisis in the swimming federation but a major financial crisis for South Africa.

You are uselessly repetitive and we as a whole Team of swimming fans and swimming lovers will probably ignore u soon enough . Take that as a kind yet FERM warning from me .

I think that it would help if you framed the debate with some additional detail. Whilst I share the direction of your argument, I think that Phelps will go to Rio and will probably get 2, maybe 3 relay golds. On the individual events, I would be surprised if he medaled in the 2001M, but he could get a Silver or Bronze in the 100 fly. Given Phelp’s progress to date, I think that your argument hinges on Phelps struggling to get faster with a taper, as he is doing a much lighter program. In addition the ageing process will start bearing down on his performances going into Rio. Connected to this you are long the option that… Read more »

Billabong: It’s nice to read such an unbiased, educated analitical approach to the discussion. Can I assume you’re Australian? I think US swimmers are often impressed by the enthusiasm for swimming in Australia. Personally, I’ve noted more emphasis upon good sportsmanship and personal improvement than winning with Aussie swimmers. By the way, thanks for your vote of confidence in our 4 x 100 Free Relay! LOL! We’re going to have a tough time beating the Australian men!

Injuries and decreased ability to recover from the exertion of workouts and competitions are absolutely key issues here! We’ve already seen a nagging knee injury that is threatening to derail Ryan Lochte this season; to 4-peat, Phelps would have to stay healthy. … Read more »

I’m pretty sure that come Rio, the USA will be strong in both Free relays. That’s not because of great individual times, but because of the odd Lezac type performer doing something crazy. Remember Bruce Larson passing Michael Gross in Los Angeles ’84 4×200 relay? it happens too often to ignore. Also 2 years is a long time away. Who knows what Michael Andrew and others will be doing then.

I feel sorry for Lochte, but as you said, staying injury free gets harder as one gets older.

Likely it is too much travel & one commitment too far . South Africa to Glasgow to wherever to the eastern seaboed in Aust whilst keeping a taper. ( all in the domestic off season) .

Phelps won’t qualify for the Olympics. He won’t 4peat either.

Le Clos must have been scared when Phelps burst ahead of him in the 100 fly world standings (in his first few meets) , or otherwise he probably would have been here.

stop repeating yurself like a idiotic parrot ! so useless to be that way .

Stop embarassing yourself. Even if you’re right then you’re still making yourself look like a troll by randomly posting these things on articles that aren’t relevant at all. If you want people to listen to your opinion then you should post it where it matters.

I was looking forward to Le Clos beating Phelps again. And ASWIMFAN, I think we all know Le Clos is going to win the 100fly. So you & the rest on this site can cut the bull crap. And some on this site with a brain have already deemed Le Clos as King because he is King.

I’m thinking you’re hoping Phelps read this, gets riled up, and busts out great times. Reverse psychology. I like it.

u play the one who ‘ knows ” and what i feel is u are a nobdy in swimming .

It is my understand that none of the big names were asked to attend Pan Pacs, VD burgh, prinsloo, Schoeman, le clos etc.
Are they the only top swimming nation that are required to contribute for their own travel etc??
With the success of le clos and Vd burgh how is the federation in such arrears?? It seems that there is serious mismanagement taking place. This federation is an absolute joke. How has their CEO Adrianse and their President Naidoo not stepped down yet???

Id like to see how succesful that country could be if their federation actually treated them the way the other top nations treat their swimmers.

Is it any wonder Darian Townsend no longer… Read more »