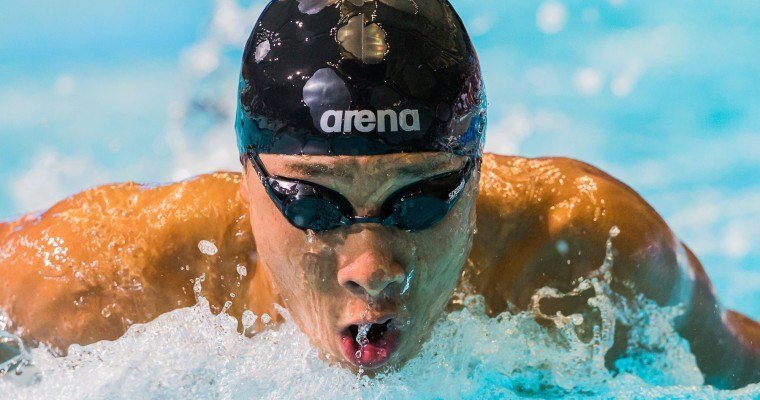 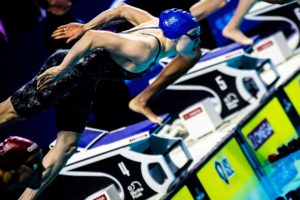 Princeton-bound Aquazot swimmer Corey Okubo loaded up on the second night of the 2014 TYR Swim Meet of Champions, swimming some of the best in-season times of his career.

His first win came in the 200 fly with a 1:58.60 – the first time he’s been under two minutes at a meet that wasn’t a national or international championship event. Okubo, coming out of California, is one of a group of swimmers in that state who are really benefiting from how (relatively) late this year’s National Championship meet is at the beginning of August. That’s 4-or-5 weeks later than when we usually see that meet, and with California’s high school championship events coming at the end of May, this gives a lot more time to wind back up and taper.

Okubo followed that up in the very next men’s final, no more than half-an-hour later, with a 2:02.08 in the men’s 200 backstroke, beating out his teammate Thomas Smith (2:03.70). Once again, that’s the fastest he’s been at an in-season meet in this race.

Both swims were very good, and it would be hard to rank which was more impressive. In terms of a time, the 200 fly was a better swim, but in terms of the situation, the 200 back was really big on such a quick turnaround.

In the big picture, Okubo last year didn’t ever put his best 200 fly and 200 back together in the same championship meet – his 200 fly was much better at Junior Nationals, and his 200 back was a little better at regular nationals. For him to perform so well not just at the same meet, but in the same day, is a big step for him.

The other men’s winners on the night were both internationals. USC-based Venezuelan Cristian Quintero, who topped the men’s 100 free in 49.86. Canadian national champ Yuri Kisil, who was the fastest in the morning, was part of a big group that pushed Quintero going out, but with Quintero being so good up to 800 or 1500 meters, nobody hung with him on the back-half.

Canadian Keegan Zanatta took the final men’s race of the night with a 3:53.20 in the 400 free. Quintero wound up 2nd in 3:55.12, derailing what would have been a really good double for him as well.

On the women’s side of the pool, Abbey Weitzeil was just shy of a career best, swimming a 55.44 to win over the likes of Andi Murez (55.50) and Jessica Hardy (55.54). Weitzeil’s a tremendous sprint talent, but again is still looking for the experience and hitting her best swim at the biggest meet. This result was faster than she was at Nationals, Junior Nationals, or World Juniors last season, but slower than she was at her sections meet in mid-July (which for a swimmer of her caliber is not usually a big goal meet).

If Weitzeil nails her taper at Nationals in just over a month, she could find herself on the U.S. roster for Pan Pacs on a relay spot at least. Beating Hardy, one of her probable competitors for a relay spot, is a confidence boost.

Minnesota’s women went 1-2 in the 400 free led by Ashley Steenvoorden in 4:12.35 and Kiera Janzen placing 2nd in 4:12.95. It was Janzen who pushed the pace early, but Steenvoorden took over a lead just past 250 meters that she wouldn’t give back.

Impressed by the Okubo’s season so far. Also impressed by the great 200 fly from Miss McLaughlin. 2.10 the day after a 800 free race. And just a few minutes after the 100 free. She’s on pace to swim 2.07 in August at the US nationals. And it will be enough to be top 3. She’s probably the savior of US women’s butterfly in the next 2 years! I never understand why a butterfly swimmer like Kendyl Stewart almost always swims the 200 back rather than the 200 fly. I know she’s also a decent backstroker but her primary event is by far the 100 fly in long course. And I think swimming the 200 fly at in-season meets could… Read more »

If USA swimming could post the race videos of the finals as well as they do it for the Grand Prix meets, it would be interesting.
I want to watch the races of Okubo, McLaughlin, Weitzeil and Merrell.
Thanks.