Le Clos: “Phelps’ World Records Have Been On My Mind Since London” 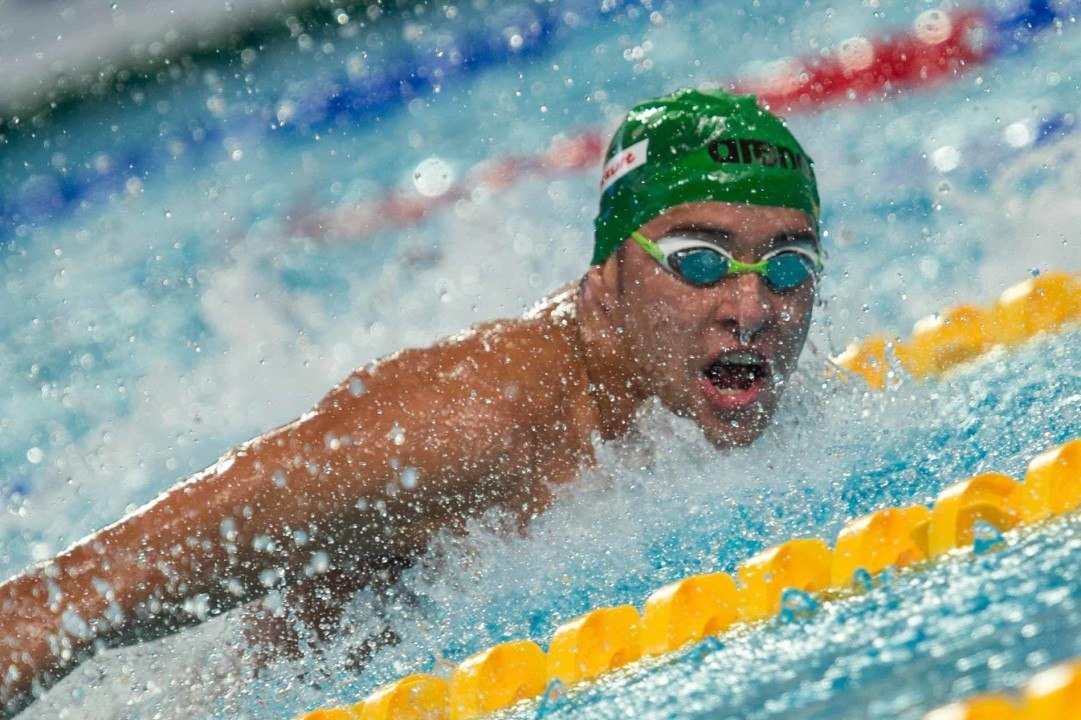 To refresh, South African Chad Le Clos had some choice words after winning the 100m butterfly gold medal at the 2015 World Championships in Kazan this past week.  When asked about Phelps’ post-race, Le Clos offered up, “Michael Phelps has been talking about how slow the butterfly events have been recently. I just did a time he hasn’t done in four years. So he can keep quiet now.” Le Clos won the gold in Kazan in 50.56, which at the time, marked the second-fastest textile swim ever.

However, Phelps responded that same night not with words, but with actions, as the 18-time Olympic gold medalist threw down the world’s fastest 100m butterfly time at U.S. Nationals, registering a 50.45 to knock the breath right out of Le Clos’ comments.

Now in an interview with Rio2016.com, Le Clos expresses his respect for Phelps, saying, “Obviously Michael Phelps is the greatest of all time and he would not come back for fun,”, referring to Phelps’ return from retirement post-2012 London Olympics. With Phelps’ commanding performance at U.S. Nationals, Le Clos clearly recognizes that “He’ll be coming to win and he will be a huge threat to my goals.”

And what are those goals? Le Clos said, “the Rio Olympics are my main focus”, confirming that “I will be in the best shape of my life for Rio and gold is on my mind. The butterfly races are on my mind and Michael Phelps‘ butterfly world records [100m and 200m] have been on my mind since I won gold in London.”

“Obviously the 49.82 seconds [Phelps’ 100m butterfly world record] will be the toughest – Michael was the first one to go below 50 seconds,” said Le Clos. “But I am feeling good and will be in great shape. The main thing I need to work on is my front end, as the second half of my race is much stronger.” With Phelps’ blistering 50.45 from San Antonio, Le Clos certainly cannot sit comfortably with his gold from Kazan.  Le Clos also points to Japan’s Daiya Seto and Americans Tom Shields and Ryan Lochte as potential threats to a Rio victory.

Putting his role as his nation’s ambassador at the Olympics in perspective, Le Clos expressed how “The Olympics are huge in South Africa. Swimming is always popular because we usually do well in it, so everyone will be watching. I will have the hopes of the nation on my shoulders come 5 August [Olympic Games opening ceremony] next year – it’ s a lot of pressure and it’ s a little bit nerve-racking, but I am very excited and I have always wanted this, so I am grateful.

“I have worked really hard and I am sure it will pay off next year. We train in a four-year-cycle that is focused on peaking for the Olympic Games. I will do my best and hopefully that will be enough to be the best swimmer in the world in all my events. I will swim to win.”

He’s not getting those world records, MP will first 🙂

If he does get into the best shape of his life, keeping the 200 free might make sense. But adding the 100 free seems ill-advised at this point.

I would normally have agreed with you but seeing that he just went a 48.18 at the World Cup in Moscow, I am impressed with that.

Right!? Holy hell I had no idea he could go that fast.

I take it back, that’s worth swimming now.

Agreed, same reason I’m not really geeking out about Phelps’s swims from Nationals. Yes, they were super fast and waaay ahead of where I thought he’d be and that’s awesome, but it’s not super comparable to WC times.

But still, I didn’t think le Clos had the ability to go that fast in a 100m free, no matter the meet conditions.

That swim is fast compared to the times at the 2015 WC (which, lets all admit it, were extremely slow)- remember that 48.16 would’ve ranked 7th in the London 100free final. With the Olympic year, it may take faster than 48.16 to qualify for the finals, and I don’t see LeClos exerting himself so close to taking a stab at Phelps and his WR.

This kid has never grown up…

No mention of schooling and/or cseh as threats?!

Cseh has never been a threat

That was weird for me too. Especially considering Cseh’s results in butterfly and their friendship with Cseh…that is insulting a bit imho.

I mean Cseh is just as pumped up and motivated as he can be. He is planning to skim tenth’s of seconds – he even mentioned 1 second – off his best times on butterfly…

Cseh and Schooling(in particular) are an obvious threat, much more so than Lochte in the 100 fly. It seems as though Chad has received some PR advice and is “being nice to Americans”. He’d be better off just swimming faster and saying nothing.

First off, he is the fastest ever in SCM and is the current 100fly World Champ and 200 fly Olympic Champ. Don’t you worry, he will be swimming faster than Mr. DUI 🙂 Besides he is way younger and has higher potential in both events.

And I’m sure there will be someone other than Phelps who are going to kick his as*. We’ll see. He needs to eat some humble pie.

Mr. DUI? Come on thats REALLY cheap. (besides he gave up drinking until after Rio)
Anyways he may younger and thats his advantage but no living thing has had ever a higher potential than Michael freaking Phepls and probably never will have. Btw, if Phelps would swim short course 100 fly and would nail every turn he’d be easily a 47.8 right now.

I hope he doesn’t drink after Rio. If you go to rehab and then join AA you have a problem with alcohol. I hope the “if ever” part of his “will not drink” comment is the one he will stick to. Alcoholics cannot social drink.

What an empty feeling it must be for him to have won the gold medal – but know that he isn’t really the fastest in the 100. There will forever be an asterisk next to his championship medal and his petulant smack talking just ensures that there will be a large segment of the population willing to remind him that he was 2nd fastest when he won the medal. As for the claimed potential – exactly what is he waiting for to unleash it? The trouble with such boastful claims is that they are hollow and can be made by anyone. What matters is if they can be backed up, and Mssr. Le Clos has so far been found wanting… Read more »

No asterisk, he won. They’re not comparable swims, especially given Phelps had a much easier time qualifying for his final than le Clos did. (And one fewer round.)

le Clos is the world champ. That’s just how it is.

Why should he feel empty about it? If he wins that gold medal and the following week someone swims faster should he have an empty feeling then? Same difference.

He isn’t the Olympic champ in 100 fly mate…. Phelps is

Phelps is the 100m Olympic champion mate, not le clos…..

Obviously you do not realize here in America no one cares about scm it has no relevance to anything. What matters is the Olympics, which happens to be long course, and in long course who has the world records? PHELPS #GOAT

No one cares about SCM. I bet the swimmers don’t even care about the SCM races and only care about the $$ that comes with them, or the fact that they can win medals because the best US swimmers rarely care enough to compete.

You do realize that from this year on the World Cup meets are in long course?
*grabs popcorn*

“Mr. DUI”? Taking a shot at someone who has been through rehab? And putting a smiley face next to it? Little bit of a jerk don’t you think?

Phelps is going to win the 200 fly. He’s focused and in the best shape of his life – when he’s like this, he doesn’t lose individual races. He barely beat Phelps in London, and Phelps wasn’t prepared at all like he should have been. If Phelps doesn’t win gold in this race tonight, I’ll eat my shorts.

And as I mentioned above, you got cseh and schooling (who both just went sub 51).. Then you got the Chinese kid who went 51.33 at worlds

But you gotta go sub 51 to “contend” and lochte ain’t doing that.. I’ll be impressed if he makes the team for rio in the 100 fly

4 sub 51 guys right now, with shields JUST outside of that by a couple hundredths of a second

trolling on twitter?
i hate that look around, plz fix your technique dude…lol 😀 😀
and plz add the 100/200 breast to your Oly schedule as well…

Yeah, he needs to focus on looking straight ahead, because that’s where Phelps will be.