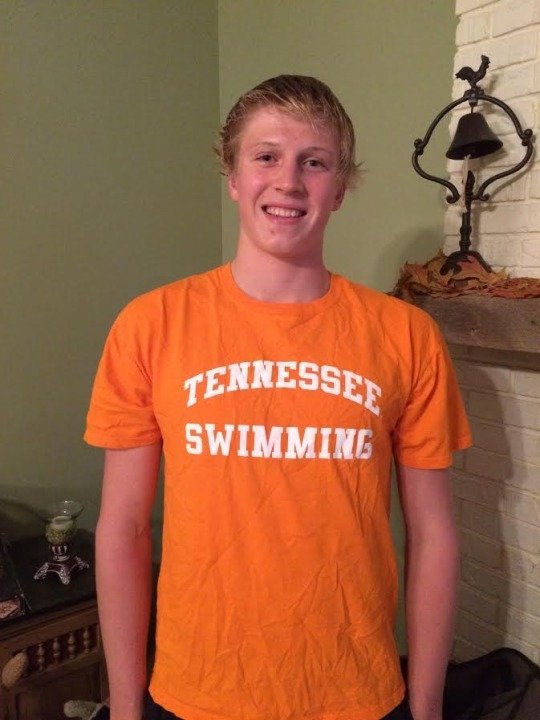 Kyle DeCoursey from the state of Indiana gave his verbal commitment to swim for the University of Tennessee during the 2014-2015 season.

Kyle DeCoursey from the state of Indiana gave his verbal commitment to swim for the University of Tennessee during the 2014-2015 season.

DeCoursey brings with him some fast times in the sprint freestyle and limitless potential that would make any coach very interested in him. His 100 yard freestyle lies at a 44.69 which is a fairly solid time, although he’ll need to improve it, it’s not that far off being competitive in college swimming.

The interesting part is how and when DeCoursey swam his 44.69. DeCoursey had a personal best time of 47.91 in the 100 yard freestyle as of March of 2013. That March however, he was swimming a 48.33 and was more consistently in the 48-second range.

Come February 2014, DeCoursey got in the pool and dropped exactly a second-and-a-half off his lifetime best to swim a 46.41, an extremely impressive drop. Eight days later, it was clear that DeCoursey wasn’t done and he came home almost two seconds faster than what he swam just over a week earlier with a time of 44.69 at the Indiana State Championships.

DeCoursey is extremely tall which will give him in advantage in his sprinting. He’s Six-foot-six and has what has been described as a wingspan reaching almost seven feet.

DeCoursey will be an important asset in the sprinting program, and by looking at his improvements in recent years it’s hard to say where he’s going to fit in on the team, or in the NCAA. He certainly has potential to drop time and get on the Tennessee relays, and if he can continue dropping a second or two in the 100 freestyle over the next year or two, he’ll be a big factor in freestyle sprinting.

With only three years of training under his belt, only time will tell how much he’ll be able to improve in his collegiate career.

Ditto what Jon said! Can’t wait to see what the future holds! Amen.

Congrats Kyle and I echo Coach Lederhouse! One to watch and no surprise this came together in the H2O. 🙂

Yo Sib!! Great to hear from you. Best wishes…

Congrats to a great family. Show those Volunteers how Hoosiers get it done.

Congratulations to you Kyle. I swam with your dad at Wheaton. Look for my nephew there with the Vols. He’s #80, a freshman TE on the football team this year…Daniel Helm. God’s best to you!